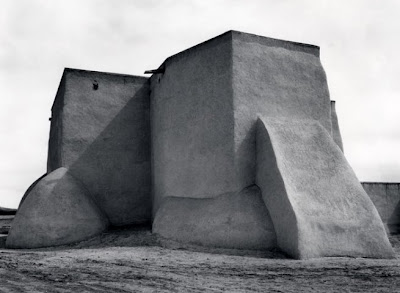 The Church of St. Francis of Assisi in Taos, New Mexico, completed around 1815, is relatively well known as the subject and inspiration for many artists and photographers, most famously Georgia O’Keeffe and Ansel Adams. It has also long been my favorite building in the world - perfect both as a piece of sculpture and a spiritual symbol. I thought of it recently as I drove by the carved form of Frank Gehry’s IAC building on the Westside Highway.

I was introduced to the church through photographs, but when I first traveled to New Mexico, originally to meet with Eliot Porter in Santa Fe, I went out of my way to visit it. The thing that immediately strikes you about the church is the handmade adobe construction which creates the feeling that it has emerged from some giant potter’s studio. However, if you walk around it today you will be disheartened to find that power lines and encroaching buildings make it impossible to recreate the famous shots of the 1930s. But the fact that those images are not infinitely reproducible has made them all the more special.

Three images in particular have stood the test of time in my own mental image bank – the Adams, a Laura Gilpin, and a Paul Strand. Each, surprisingly, found different angles of what is actually the back view of the church and it’s uncharacteristically difficult for me to pick a favorite of the three. What do you think?

And if any readers have taken their own favorite picture of the church, please e-mail to: jd@danzigerprojects.com. 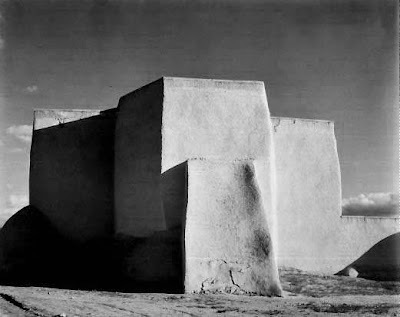 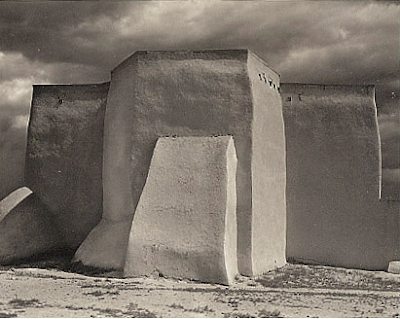 Posted by The Year in Pictures at 8:02 AM

Of these three images, only the Ansel Adams captures the soft, flowing forms of the church as I remember it from my visit several decades ago.

This is the first time I've seen images of the church and the Adams photo is the one with which I'm most taken. It brings out the curves of the building beautifully and makes it seem most like a pottery object as you mentioned but it also seems to possess some kind of store of energy that it is waiting for the right moment to release like some cubist elephant's foot in the dust

Adams'. By far. Although Strand's sky makes it interesting, the softness and roundness and 'out-of-the-earthness' is stricking in Adams' shot.

I've never seen the church in person, but as a stand-alone photograph the Gilpin really does it for me. I love the strong shadows, you can just feel the desert heat radiating out of the photo.

The architectural simplicity is beautiful. Brings calmness to my mind.

I love the Paul Strand, simply because with the light in his photo you can see the curves of the building best. It reminds me, in the best way possible, of a thumbprint peanut butter cookie. I hope that doesn't sound too silly.

I love Adams's composition but Strand's cloudy sky. I can't decide between the two.

I could have sworn I'd seen a Pual Caponigro image of the church, but my Google search didn't turn it up.

It's tough to fully judge these on the internetz. The Strand image looks much better to me in his Aperture Master's of Photography monograph than it does here, but I still say the Ansel Adams image is the best of the three.

I would LOVE to see the inside of this church ....!

I go with the Adams because it seems the most descriptive of the three. The other two are brilliant also but put the church at some remove. The Adams lets me run my hands over the surface of the stucco.

They are all interesting, but Adams is extraordinary.

I like the way Gilpin uses the bridge? to the right to create more possibilities. Is there more? Is there hope?

I say Adams' because waiting for the shadow to fall perfectly diagonally on the left wall is what you call patience.

So beautiful, the church, the sky
Million kinds of gray

Impossible for me to say, honestly. All three build upon each other. Adams provides a context and contrast between the earth still on the ground, the earth of the building and the sky. Gilpin's feels the most like a 'building' a imagine people coming in and out I have expect to see someone in the frame. And Strand's presents the magic and emotion I expect you would feel being the buildings presence.

I can see why it is your favorite building in the world.

If you love this church you must see Debra Bloomfield's book "Four Corners" beautiful modern photos of it that I believe add much to the history of photos of this building.

Very cool pictures. They remind me of buildings my children used to build out of playdoh: not quite square and not quite round, and growing out from the tabletop.