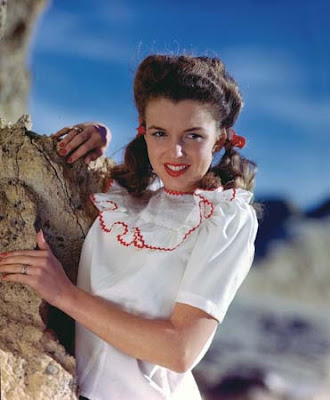 Ever since last week's announcement that Kodak was discontinuing production of Kodachrome film, professional and amateur photo-
graphers alike have been busy mourning its demise. Kodachrome was known for its rich color saturation and was widely used by professional print photographers since it's introduction in 1935.

Depending on how you see and process the world, Kodachrome can either look very realistic or not. I happen to find it pretty accurate but to many people it does seem oversaturated.

Unlike other color films, Kodachrome, is purely black and white when exposed. The three primary colors that mix to form the spectrum are added in the development steps rather than built into its layers. Because of the complexity, only Dwayne’s Photo, in Parsons, Kan., still processes Kodachrome film. The lab has agreed to continue through 2010, Kodak says, but the reason the film's demise has been getting so much attention is that it's yet one more sign that the pre-digital world is irrevocably behind us.

For the record, I'm a big fan of digital - mostly because it's so easy to manipulate and control. However, I also love the look of Kodachrome, so here are a few gems. An early shot of Marilyn Monroe, above, by Andre de Dienes. Below, a group of pictures from the archives of FORTUNE Magazine kindly sent to me by their deputy photo editor Scott Thode. (For the full FORTUNE album click here.)

This shot of caddies from the Pinehurst Golf Course in North Carolina in 1957 was taken by Walker Evans! 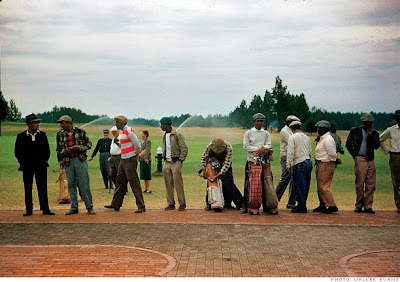 From the same year, W. Eugene Smith caught this moment at the headquarters of the Connecticut General Life Insurance Company. 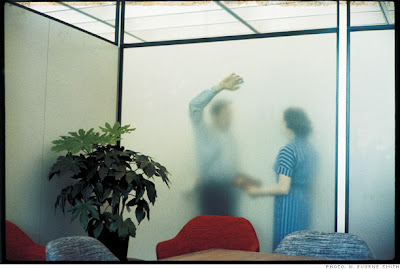 The celebrated French photographer Robert Doisneau was commissioned to shoot a story on Palm Springs where he grabbed this shot. 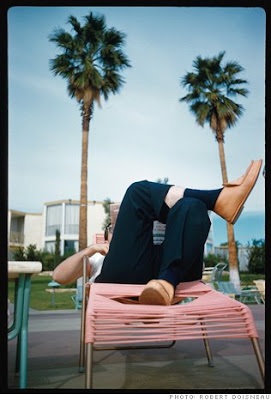 And lastly, it should come as no surprise to any regular followers of this blog that my very favorite story shot on Kodachrome was of course Paul Fusco's "RFK Funeral Train". Below, one of my favorite images from the series. 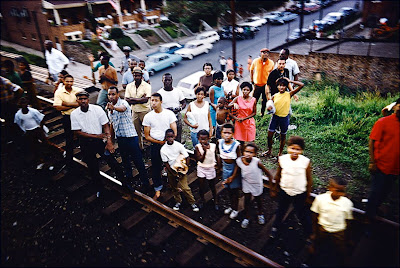 We can still, however, select the digital version of Kodachrome either in our cameras or post-processing program. (I know, it's not the same.)

really interesting to see the examples of well-known b/w photographers using kodachrome. would love to see an entire book of Evans, Smith and Doisneau's work in this medium...also wonderful selections for this gallery by the editors there.

Like so much else, my world--film, the smell of black and white developer, the swish of the print as I moved it from tray to tray, working the "zone" in the darkroom, bracketing a shot, pushing the film in the shaking canister--is gone.

This story is evidence. Thanks for its eulogy.

While the world in which I learned photography is ebbing away, I must say I love my digital camera, coupled with my computer. It's just too bad it's so "soul-less."

gosh, so much beauty.

i love the colour in the doisneau shot!