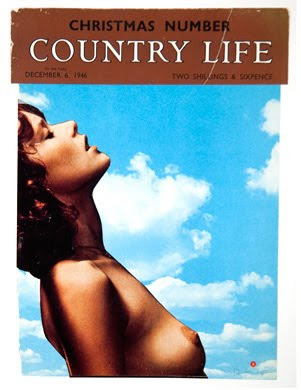 Some things come into your mailbox and make you smile. For me it's this collage announcing Duncan Hannah's forthcoming show at Half Gallery. The juxtaposition of this sexy summery profile with the stodgy Country Life - and their Christmas Number, no less - make for a funny and surreal jolt!

Duncan Hannah, who is best known as a talented realist painter, is one of those artists who I see making their way around the galleries, checking out what's on. I always think this is a good sign - someone not so locked in their garret (or studio) that they can't engage with the world.

Anyway, the show opens June 1 and I certainly plan to check it out. In the meantime, to those in The States - have a happy Memorial Day Weekend! 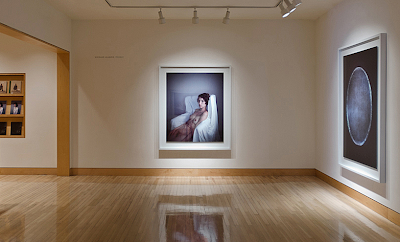 Exactly one month left to see the Richard Learoyd show at the Fraenkel Gallery in San Francisco. Try not to miss it if you're anywhere near the area. For those with good or even short memories, Learoyd was number one in my Top Ten list of 2010 - singled out for invigorating at least three genres at once – cameraless (or more accurately film-less) photography, portraiture, and still life.

Working with a self-made camera that creates highly detailed near life-size images by projecting an image directly onto photographic paper without any interposing negative, Learoyd produces unique large scale prints unlike anything seen before. There is a tactility and a detail that makes the figures (and objects) seem like they will at any moment start breathing and walk right out of the frame.

Surprisingly (to me) for many years Learoyd was a commercial photographer - an area that somehow rarely produces top notch fine art photographers. You tend to pick a lane (or the lane picks you). At least that's been my experience over a very long period of looking of photographers' work. But Learoyd is the exception and proves that there is always someone doing something not only new but new and with integrity, substance, depth and meaning. The trick is to find them!

I know it gets a little tiring to constantly single out Fraenkel's shows, but they do them beautifully and most shows, including this one, have accompanying catalogs that are collectibles in their own right and well worth the money. ($45 for the Learoyd catalog.)

If I Had A Million Dollars ... 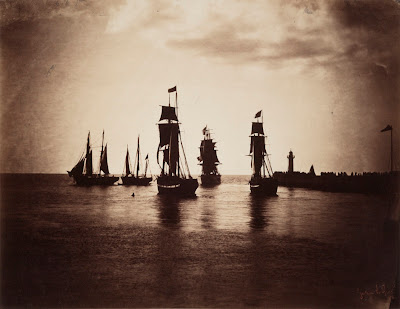 If I had a million dollars - or more precisely $115,000 - $175,000 (or possibly more) - I would want to bid on this striking seascape by Gustave Le Gray. Coming up in the Vendôme Photo Auction in Paris on June 18, it has the rare distinction of coming directly from a collection of one of the photographer’s peers, the 19th century shipping magnate Charles Denis Labrousse.

Gustave Le Gray is an interesting figure in photography. Barely recognized until the late 1970s, a cache of Le Gray's at the Victoria and Albert Museum led to the late recognition of the quality of his work. And while Le Gray mastered many genres of photography, he is justly celebrated for his seascapes and the technical innovation of using multiple negatives to produce works where the sky was as well exposed as the sea. (Until Le Gray you rarely see skies of any note in 19th Century photographs.)

One of the pioneering practitioners of the medium, Le Gray made his first daguerreotypes by 1847. His early photographs included portraits, scenes of nature such as Fontainebleau Forest, and buildings such as châteaux of the Loire Valley. He taught photography to students including Charles Nègre, Henri Le Secq, Nadar, and Maxime Du Camp. In 1851 he helped found the Société Héliographique, the first photographic organization in the world. He also published one of the first treatises on photography.

In 1855 Le Gray opened a lavishly furnished studio in Paris, becoming a successful and noted portraitist while at the same time beginning his first seascapes. In spite of his artistic success, however, his business was a financial failure. The studio was poorly managed and ran into debt at which point Le Gray closed his studio, abandoned his wife and children, and fled France.

In 1860 he traveled around the Mediterranean with Alexandre Dumas, but they parted ways after a clash over a woman they both fancied. Le Gray moved on to Lebanon, then Syria, and Egypt. In Alexandria he photographed the future Edward VII of England. He established himself in Cairo in 1864 where he remained for about 20 years, earning a modest living as a professor of drawing while retaining a small photography shop. He sent pictures to the universal exhibition in 1867 but they failed to catch the public's attention. He died in 1884.

While the Le Gray market was slow to develop, in October 1999, Sotheby's sold a Le Gray albumen print "Beech Tree, Fontainebleau" to an anonymous buyer for £419,500, setting a world record for the most expensive single photograph sold at auction. Later that day at the same auction, an albumen print of "Grande Vague, Sète" also by Le Gray was sold for a new world record price of £507,500 or $840,370 to the same anonymous buyer. The buyer was later revealed to be Sheik Saud Al-Thani of Qatar. The record stood until May 2003 when Al-Thani purchased a daguerreotype by Joseph-Philibert Girault de Prangey for £565,250 or $922,488.

Over the past eight years the record has continued to climb and just last week the world record for the most expensive photograph sold at auction went to Cindy Sherman’s “Untitled #96″ from 1981, when it sold for $3.89 million at Christie’s.

So that million isn't going to get you far in the contemporary art photo game, making the Le Gray an even more appealing buy! 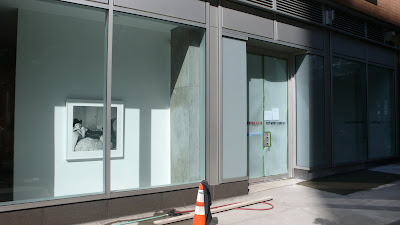 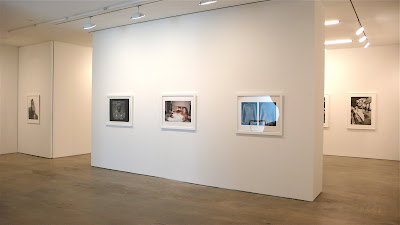 From left to right, Kate by Bruce Weber, Annie Leibovitz, Juergen Teller, and Chuck Close. In the background, Glen Luchford.

Two views of the new gallery. We're opening Thursday evening with our long-in-the-planning collaboration with Kate Moss - "The Kate Moss Portfolio and Other Stories". Click here for more details.

The cone will be gone, the cement will be dry, and the show will be a knockout, I promise!

The opening is 6 to 8 p.m. and all blog readers are welcome.

Something to Dream About 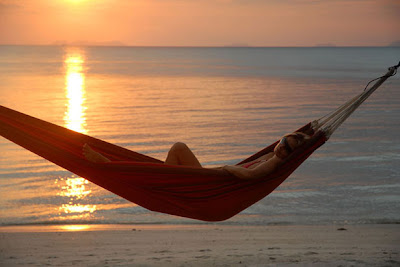 Sometimes those of us in the fine art photo world forget about the simple visceral pleasure a sunset snapshot can bring.

This one came into my e-mail box calling for applications for Guesthouse Basel - a collaboration between e-flux and Städelschule, Frankfurt - a free residency for young artists, curators, writers and gallerists. The residence will be located in close proximity to the Art Basel fair grounds and will run from June 15 through June 19, 2011.

To apply, send a short bio + 500 word statement of intent to guesthouse@e-flux.com.

I'm not sure the beach is provided, but the dream is free!