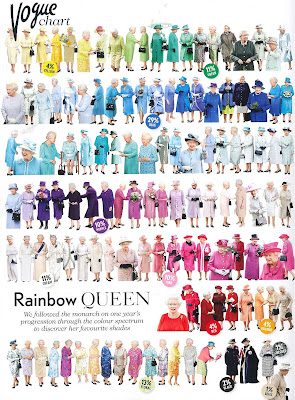 If you ever wondered why a certain shade of blue is called "royal" - British VOGUE's helpful and witty chart should explain why. The magazine noted every outfit worn by the Queen over the last year and found that 29 per cent of the coats, dresses, suits and hats she wore over the last 12 months were predominantly blue..

Although not a color, floral was next with 13 per cent, followed by green and cream each at 11 per cent. Pink and purple - 10 per cent - red, yellow, orange - four per cent - and black - two per cent - were next.

Whatever the color choice, it's clear the Queen is aware of the visual impact she makes - a boon to royal photographers.

There are many wonderful things in the iGavel auction of photographs from the collection of Dody Weston Thompson (ending tomorrow - Tuesday - so act fast.) Dody was the ex-wife of Brett Weston, a protege of his father Edward Weston, a co-founder of Aperture, and a skilled photographer herself.

The Weston men were legendary womanizers, but there is one auction lot in particular which sheds an endearing light on Brett's character. A Christmas card he sent to Dody showing himself in front of his new ranch house has the handwritten inscription on the reverse "A happy Xmas for Dody - with warm memories of five wonderful years, Brett. PS am sending you a thousand dollars in a few Days."

I don't really know much about their relationship, but there seems to me to be a fondness and a generosity to the note not often found in cards to the ex!