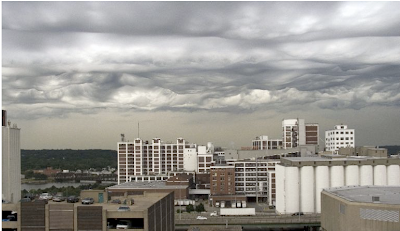 As a longtime fan of cloud photos I was intrigued by the photo above, and the story below from A.P.:

Looking out the 11th floor window of her law office, Jane Wiggins did a double take and grabbed her camera. The dark, undulating clouds hovering outside were unlike anything she'd seen before.

"It looked like Armageddon," said Wiggins, a paralegal and amateur photographer in Cedar Rapids, Iowa. "The shadows of the clouds, the lights and the darks, and the greenish-yellow backdrop. They seemed to change."

They dissipated within 15 minutes, but the photo Wiggins captured in June 2006 intrigued — and stumped — a group of dedicated weather watchers who now are pushing weather authorities to create a new cloud category, something that hasn't been done since 1951.

Breaking into the cloud family would require surviving layers of skeptical international review. Still, Gavin Pretor-Pinney and his England-based Cloud Appreciation Society are determined to establish a new variety. They've given Wiggins' photo and similar pictures taken in different parts of the world to experts and are discussing the subject fervently online.

"They (the clouds) were the first ones that I noted of this type and I was unsure which category to put them under," said Pretor-Pinney, author of "The Cloudspotter's Guide." "When we put pictures up online we list the category, and I wasn't sure how to categorize it."

Some scientists are skeptical. They argue that researchers who have long watched the sky haven't seen anything distinctly new for decades.

There are three main groups of clouds: cumulous, cirrus and stratus. Each has various sub-classifications built on other details of the formation.

Brant Foote, a longtime scientist at the National Center for Atmospheric Research in Boulder, Colo., said the clouds photographed by Wiggins already fit into the existing cumulous classification.
But Pretor-Pinney, who never studied meteorology, believes the clouds merit their own cumulus sub-classification. He proposes they be called altocumulus undulatus asperatus. The last word — Latin for roughen or agitate — is a reference to the clouds' undulating surface.

Posted by The Year in Pictures at 6:54 PM

I had this exact same feeling last summer

That is incredible... it almost looks like a Hollywood digital effect.

I'm fascinated by clouds. We had some similar looking clouds overhead one wierd quasi-story day, but nothing as dramatic as these.

I just wish I could go back to childhood and lay out on the lawn and watch the clouds, the grass slightly prickly underneath, the blue sky and ambling cloud forms overhead. Now I'm much too grown up, I guess, plus I live in LA area and we just have cloud cover and smog. Sigh.

These are beautiful. I never get tired of looking at the variety of clouds. I've observed clouds here in the Pacific Northwest I never saw in New England. Those that look like encyclopedia illustrations for laminar flow are amongst my favorites.

I saw a similar cloud formation, almost as dramatic as these, during a visit to Illinois recently. It was a roiling tumultuous mass, lit from within with occasional sparks of lightning. For some reason I thought of it as a giant brain having capricous thoughts. And I'm by no means religious.

this post almost makes me appreciate these two weeks of English-style weather we've been having here in New York...almost I may not be entirely thrilled by these dreary days but i do get a small lift from the fact that somewhere behind the scenes in the scientific community, a new "species" of cloud may be born!

Fantastic clouds, however I think they are regular old fashion stratocumulus clouds. Either way they look nice.

James, if you like cloud photos check out some of my aerial cloudscapes at www.pbase.com/skysaddle.