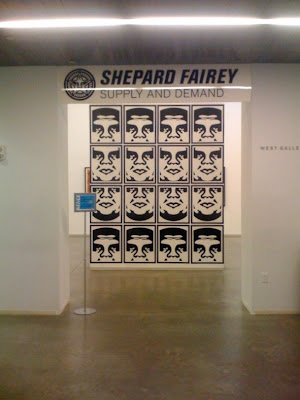 I don’t know if anyone is dying for a Shepard Fairey update but here’s the latest.

Because of my involvement with the Fairey/Garcia/AP case, I have now been served a subpoena by Fairey’s lawyers and will shortly be deposed. This means gathering every piece of paper relating to any of the above and then being questioned and recorded under oath. No big deal, just a pain.

By coincidence, I happened to be in Boston today and thought I should visit Shep’s show at the ICA. As I have always maintained, I’m actually a fan of Fairey’s work (just not his image “borrowing”) and it’s an amazing show. Beautifully and thoughtfully conceived and installed and full of good work. If you’re anywhere nearby go and see it.

As many of you know I enjoy taking pictures in museums and it always seems silly to me to not allow photography. At this show, however, the young guards were trained with what seemed like military precision - always on the move, crossing from one gallery to another in a way that never left a room unguarded. It was eerie and ironic. But not quite as hypocritical as the sign that greets you as you’re about to enter the show requesting “Please no photography in galleries”! 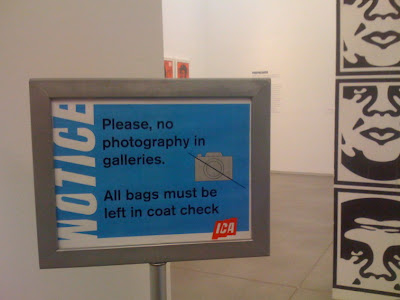 So in true guerilla spirit, I had to snap at least one with my iPhone: 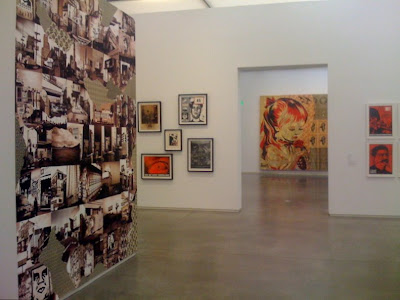 If all this wasn’t enough, last week I got an e-mail from the film-maker and journalist, Edward Nachtrieb. As Nachtreib explained: 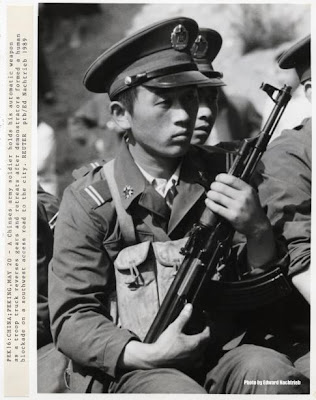 Exactly 20 years ago I took this picture of an armed Chinese soldier at the onset of martial law in Beijing. That same image, with no attachment to its original context or how it fits into the Chinese story, was appropriated by artist Shepard Fairy (of the Obama "Hope Poster" fame).

Beijing residents, using busses and their bodies, had blocked a convoy of soldiers attempting to enter the city. This was the first appearance of lethal weapons on the streets and was a precursor of what was to come on June 4. I'm sure the reality of the picture is not relevant to the artist...but I find that disturbing. Images stripped of their context but retaining strong emotional elements are hallmarks of fascist and Soviet propaganda styles - an acknowledged inspiration for this artist. In this case, I think a lack of accurate context for the image drains it of meaning. It's also dishonest. I suggest that Mr Fairey credit those whose materials he uses to "inspire" him. The truth of things might help enhance the depth of how his work is perceived and actually make it more interesting to contemplate and not just cool to look at. 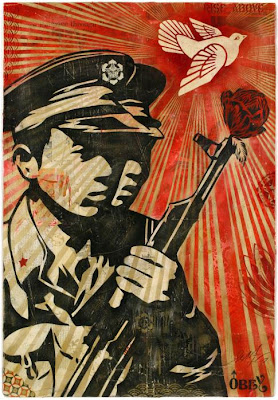 Inside Fairey’s ICA show, one of the wall texts proudly quotes Warhol saying “Art is anything you can get away with.” This is one of many things the court will have to decide in the Fairey/AP case.

I totally agree with you on the Chinese soldier photo. When images or words are taken out of their context their meanings disappear entirely. And then a bit like in Orwell's 1984, when the meanings have faded away history can be restructured and remade at one's wish...

Love your blog. What are your thoughts on Warhol's use of others photos? It is the same no matter how you look at it. If I make a drawing from a photograph in an encyclopedia, is that wrong? Do I credit that person? It's a big issue now, but one that will not end.

Now I am totally confused with this case
And sad as well, cannot explain why.
To be continued.....?

Don't get me started on the "No Cameras Allowed" issue... the most ironic example I know of is the no camera policy at the International Center of Photography! How ridiculous is that??

This reminds me of the debates over sampling in rap songs. Art is inherently derivative. Would it be polite to cite the source of the image? Probably, although I do not find it neccessary; on the otherhand I do find it ironic that Farey does not allow pictures taken of his own work.

In our world today, images are as ubiquitous as pebbles on a beach. To put them all off limits in an ill-informed attempt to protect their original context would severely restrict artists' ability to interact with and transform, or at least interpret, our world. We are beseiged with images that define our world; the fascism lies in their prohibition as subject matter. When a million photos of Obama exist, and an artist uses one to make a drawing or painting or poster, does that make him liable? If so, then the image of Obama is out of reach, as are images of almost anything. You are making a fundamental mistake in assuming that art exists because of artists, who need therefore to be protected. The same misconception exists in the music industry, which believes that downloading will have the effect of curtailing future production of music. Of course, no such thing is possible. Music and art are threatened only when artists and their creations become too protected (and I'm using the word "artist" loosely here as anyone who produces images, not as someone who transforms images to make new meaning, such as Fairy.

This whole story got me to reading more about Shepard Fairey. Long a fan of his visual style, I found his attitude disturbing. In my reading, I came across this piece:
http://www.art-for-a-change.com/Obey/index.htm (I promise this isn't spam, I am not all connected with that website). It seems Mr. Fairey has a disturbingly long history of such non-contextual image "borrowing." I have been watching this story with interest, and will continue to do so. Thank you, Mr. Danziger.

Thanks for keeping us updated. Hopefully this will pass you by with the desired result and a minimal amount of stress. I agree with Nachtreib's comments on context, for what it's worth.

>> This reminds me of the debates over sampling in rap songs.

But over the past ten years or so, the legality of music sampling has become verywell defined, and there are standard routes to clearance and fees.

>>In our world today, images are as ubiquitous as pebbles on a beach. To put them all off limits in an ill-informed attempt to protect their original context

Is anyone seriously asking to put all images off limits? Haven't these Shepard Fairey issues been more about dealing fairly with credit and compensation?

It's really too bad how this whole affair is turning out.

I was happy to hear that you're in Boston. I'm a local so, welcome to beantown! and by the way, i appreciate the guerrilla tactics.

Regardless of the outcome, Fairey has gained alot of publicity over this, including a page in the current Art + Auction magazine (with comments by yourself).

I agree with almost all the posts and like someone mentioned, something doesn't sit right with how Fairey approaches art and community. Someone mentioned Warhol, maybe he got away because he wore his ambitions on his sleeve. I don't know. But it's given me something to chew on.

at the end of the day who cares whos right and whos wrong, ultimately Shepard Fairy accomplished what he set out to do which was to get everyone thinkin and talkin about what they see goin on in their environment (something he initiated way back when-when he was just a little art fag).

tell you what, bullshit is still bullshit. the line may be fine, but it is still there. it takes so little to pay the deserved respect do the sourced artist. and not pretending it doesn't matter is a good start. tip your hat when called upon!

(the blog is enjoyed!)

i commend you for being decent and classy, even when you aren't shown the same.

Blame Bill Gates for the no photography rules in many galleries. Gates' company, Corbis Images, approaches cash-strapped galleries and offers them bags of much-needed cash in exchange for "digital rights in perpetuity." I'm sure that banning photography inside the gallery is part of the equation. Where do all of those photographs go? Why here of course: http://www.youtube.com/watch?v=2aou6c2MOmg.

I totally agree with Roger up here.