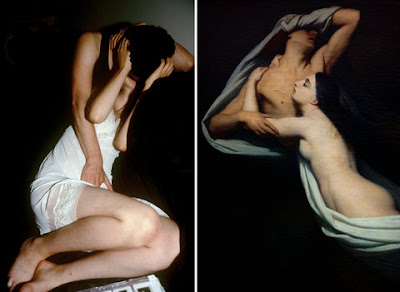 As regular readers will know, one of my great pleasures is seeing memorable pictures in the New York Times, and this week brought some excellent ones. Above - and gracing the front page of Thursday's Arts section was this photograph by Nan Goldin (left) paired with an 1855 painting by Ary Scheffer from Goldin's new show at Matthew Marks - the result of Goldin being given free rein to browse The Louvre on the days it was closed to the public. The show is up in New York for two months. Don't miss. 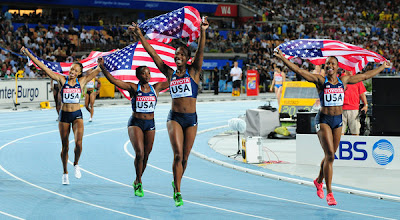 Next up, from today's Sports section, this joyful victory celebration in the women's 4 x 100 meter relay captured by Mark Ralston. It's so balletic it could be a dance photograph! 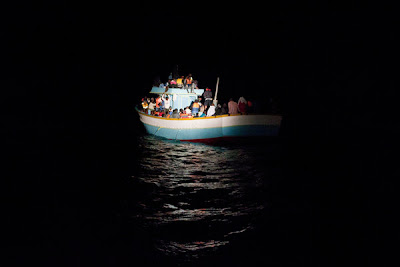 On a more serious note, Magnum newcomer Mark Zachmann photographed a boat carrying 158 Libyan refugees shortly before it was stopped by the Italian coastguard. (Italy has the closest European shore to Libya.) It has the gravitas and compositional power of a great history painting. 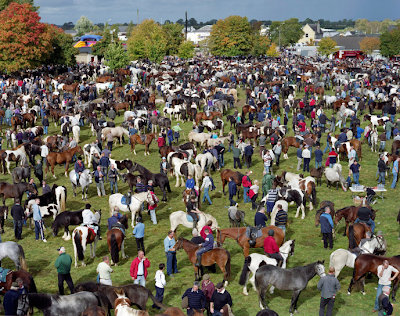 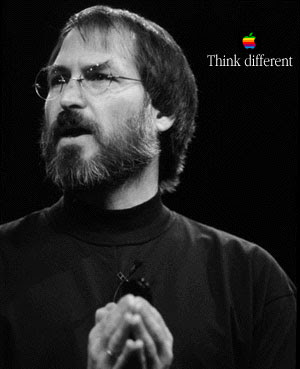 I'm not sure if there is any category of people who were more affected by Steve Jobs' innovations than photographers and the photography minded. Everything Jobs masterminded at Apple was elegant and visual. Everything Apple innovated made life easier and better for the viewing, management, and simple pleasure of working with and looking at photographs. To say he will be greatly missed is an understatement.

But in many ways, Jobs will not be gone from Apple. He consistently put the right people in to the right positions so that his creativity, insight, marketing genius, and his ability to “Think Different” can continue. Jobs put it best himself:

“My model for business is The Beatles: They were four guys that kept each other’s negative tendencies in check; they balanced each other. And the total was greater than the sum of the parts. Great things in business are not done by one person, they are done by a team of people.”

During his life, I always thought of Jobs as arrogant. Now and as we read more and more about his personal life and thoughts, and ponder his remarkable achievements, I think he was modest. 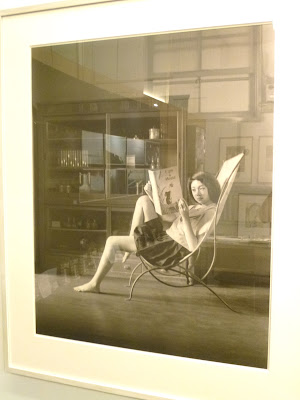 For me there's nothing quite like Tokyo. I love the way that form follows function in both the design sense and also in the sense of the formality and functionality of the place. I love the Tokyo subway. The museums. The stores. The enthusiasm and politeness towards strangers, and most of all the people I had the pleasure of meeting or dealing with. In three trips I don't think I've ever had a bad or rude experience.

To me Tokyo is a city of innovation. Everything seems to work and there are always new ideas of how do things. Cabs are plentiful. The airport buses are a model of efficiency. We all know about the toilets. Recently Tokyo introduced "Women Only" carriages on the subway so that women going to work didn't have to be hassled. Now why don't more places do that?

But back to photography. For my third Tokyo Photo fair, I tried to bring things that I thought would interest my hosts. A wall of work by 11 different western photographers new to art fairs. A Kate Moss selection. Sartorialist prints. Warhol polaroids. And a new Susan Derges piece. I'll show these later but for this post I'll concentrate on some of the many Japanese photographs that struck me as particularly good.

Above and below - the work of Hisaji Hara. A graphic designer and film-maker by background, over the last few years Hura has obsessively translated the work of the already obsessive painter Balthus into extraordinarily original photographs. As a concept, nothing could interest me less than copying painting but Hura's work has such a unique sensibility and the photographs have such a timeless feel that they are completely successful. 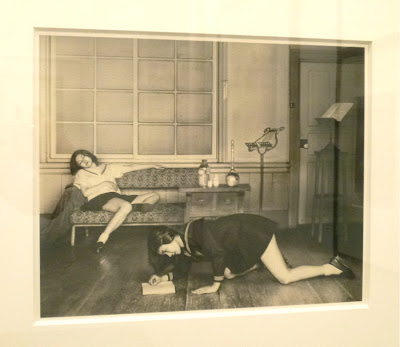 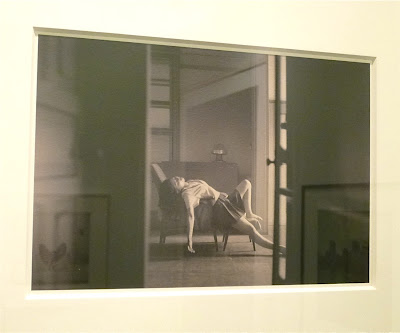 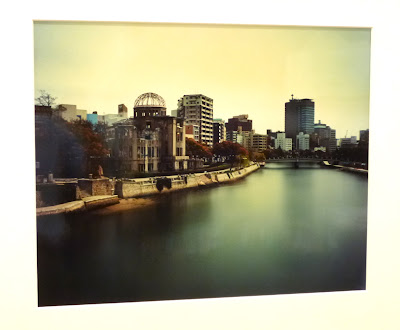 Ken Kitano's work has consistently dealt with time and layering. Here one of his sunrise to sunset pictures wherein he literally stands by his camera for a day as it captures the passage of time and light. This one is of Ground Zero at Hiroshima. 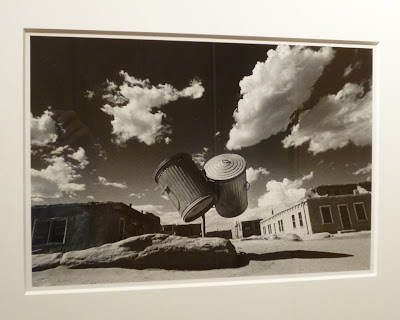 Also new to me was the work of Ikko Narahara. This surreal but un-manipulated shot was credited by the British photographer Chris Shaw, whose work was being shown at the fair by The Tate, with inspiring him to be a photographer. More on Chris and his work later. 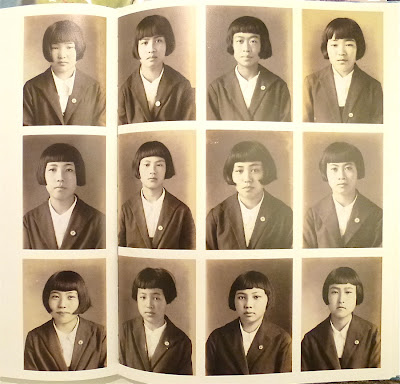 Anon. by way of Fiona Tam.

These anonymous photographs of Japanese schoolgirls were found at a flea market by artist Fiona Tan and became the basis of a complex video piece. But as a refection of pure Japanese visuals and culture I think they're stunning - a study of uniformity, diversity, and seriality. 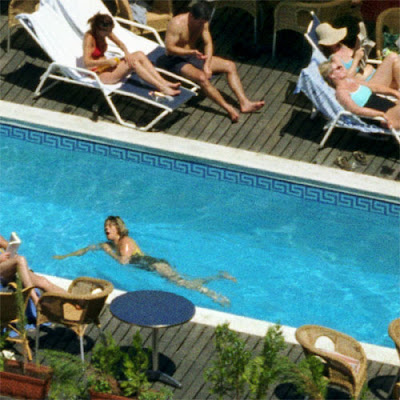 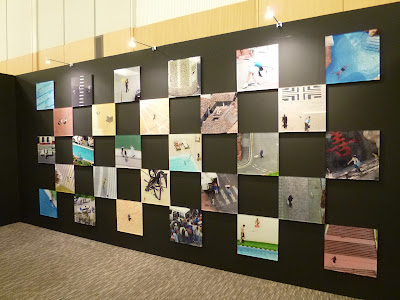 I remember liking Taiji Matsue's work two years ago. Matsue photographs from a great distance and then blows up telling details of seemingly random incidence into little squares. This was a nice installation. 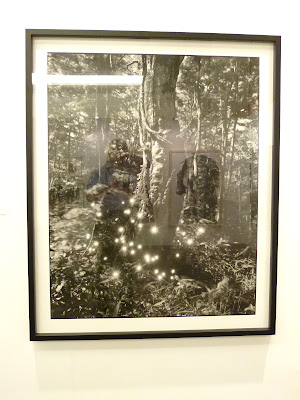 Tokihiro Sato creates his pictures by opening the lens and moving around with a flashlight to create mysterious and magical effects. One of the ideas I heard in Tokyo (from Yoshiko Suzuki at the Tokyo Metropolitan Museum of Photography) was the idea of a post 9/11 - post 3/11 (the Japanese Tsunami) sensibility in art. This works for me in that way. 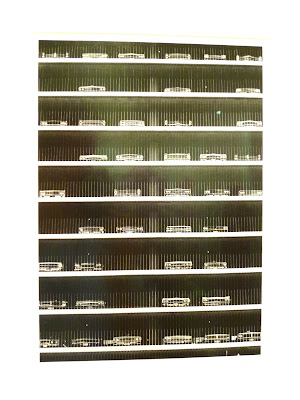 A Chicago picture by the great Japanese photographer Yasuhiro Ishimoto from when he was at The Art Institute. If you click into it you'll see it's a picture of cars in a parking garage. One of my favorite individual pictures in the show. 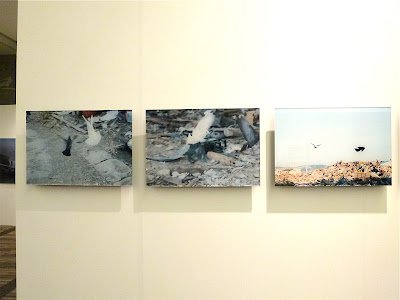 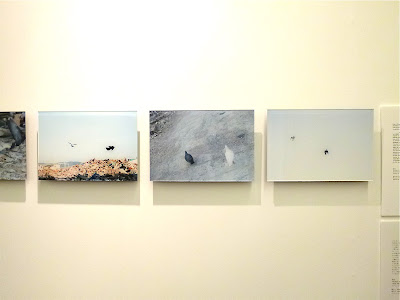 A section of the fair was given to photographs specifically of the after effects of 3/1. The always reliably mystical Rinko was photographing the devastation when a black and white pigeon appeared - flying away only to return again. To her they symbolized life and death, hope and despair, light and dark, Adam and Eve. 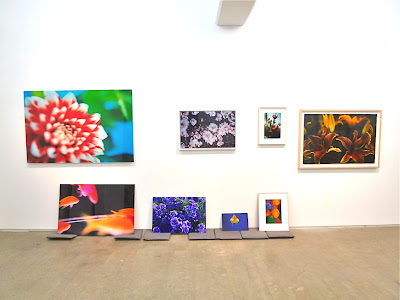 And last but certainly not least - a group of Mika Ninagawa photographs in a back room at Tomio Koyama gallery. I have been wanting to meet Ms. Ninagawa - one of (if not) Japan's most popular photographers - for quite a while. I love her super-saturated pop take on flowers and fish and whatever else crosses her lens. She's sort of Nan Goldin meets Andy Warhol but in a completely original form. This trip I finally got the chance to go to her studio and home and I am pleased to say that I will now be representing and showing her in the U.S..