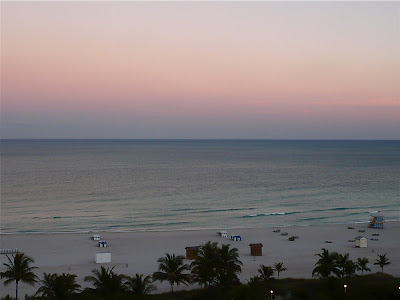 Keeping with tradition, I'll begin with the view from my room, not to make anyone envious, but because I always find the light and view so inspiring. Here's looking east ... 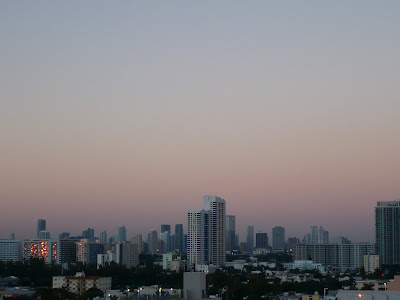 O.K.. So much for that. My fair going began with Photo Miami, but first a little preamble. Art fairs, especially in Miami where there are now about 20 satellites to the original Art Miami Basel Fair, are something of a love/hate thing for me. You want to see good work, but much of it is bad. You want to be happy, but many of the people look so sad - in particular the dealers who are sitting in booths where no-one seems to be paying any attention. You want to be inspired and excited by art but the air of commerce hangs heavily.

Nevertheless, I was surprised and pleased to see that at this year's Photo Miami there was much more uniqueness in the offerings. They may not all have been good, but it was better than when you would go to a fair and every booth had the same O. Winston Link, Cartier-Bresson, and Misrach of the Golden Gate Bridge! So here are a selection of the mostly good things that caught my eye. 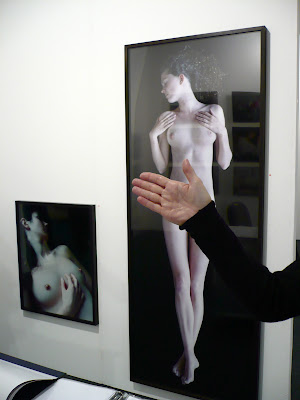 A nearly life-size Carla Van De Puttelaar at Galerie Esther Woerdehoff. (That's Esther's hand helping to keep the blog family friendly.) I've been a fan of Putelaar's since I first saw her work illustrating a fiction piece in The New Yorker and we've been communicating sporadically. I think she's a terrific photographer and fits nicely into the Dutch contemporary photography tradition, but I'm just not sure that my clientele are interested in buying and hanging up (as opposed to appreciating) her large scale nudes, no matter how beautiful. 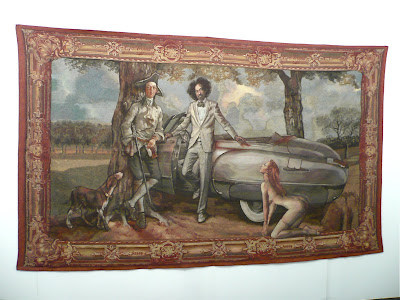 Next up this large tapestry by Margret Eicher caught my eye. I asked the dealer what it had to do with photography to which he replied "New Media"! Nevertheless, as a student of 18th century British painting, I found the contrast of the Gainsborough on which it's based and Snoop Dog amusing. 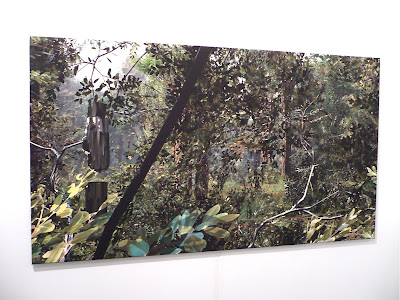 Trying to point out some trends, computer imaging was very prevalent. This artificial landscape by German artist Gerhard Mantz was created using 3-D graphics, the next frontier in digital imaging. 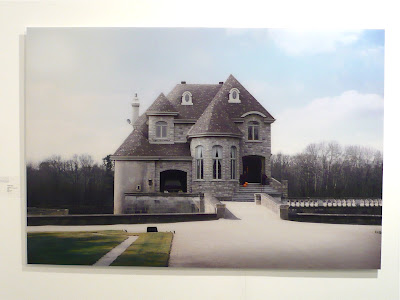 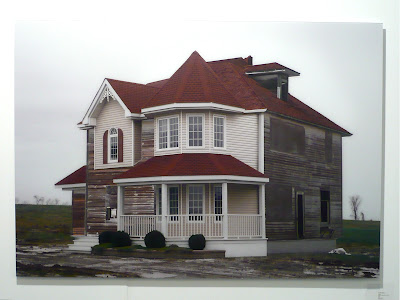 Another trend is a kind of Hopper meets contemporary photography look. Here are two interesting pictures by Isabelle Hayeur. 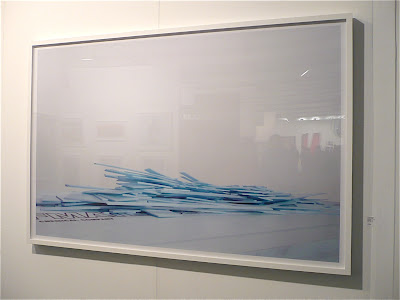 A variation on the theme, but there's lots of cubist/construction looking architectural. This by Hannes Norberg. 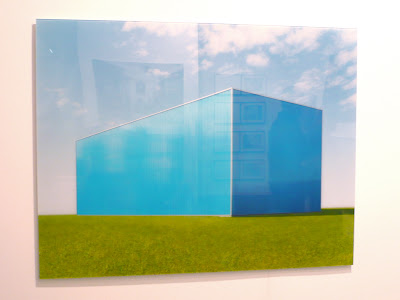 And back to pictures of buildings, this by Josef Schulz. 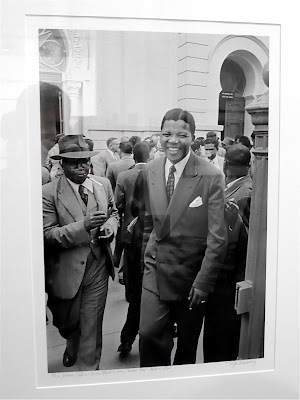 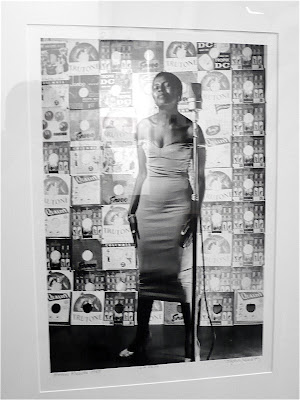 There was very little "classic" photography which made these two photographs by Jurgen Schadeburg stand out all the more. Top, Nelson Mandela. Bottom, Miriam Makeba. 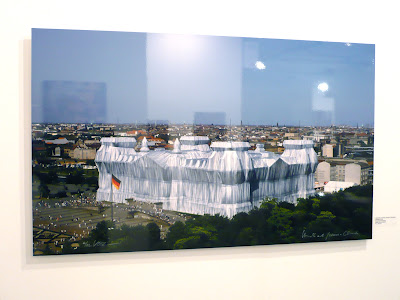 Also, Wolgang Volz - who has been working with Christo documenting his art for decades. 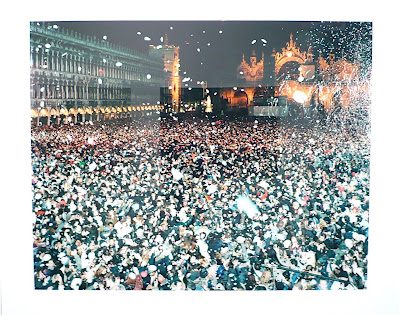 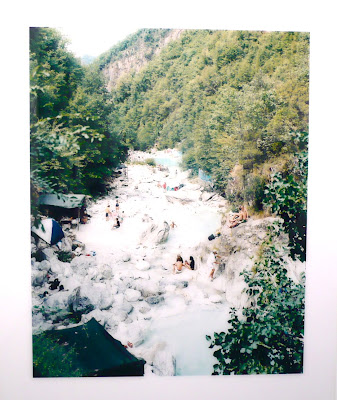 Massimo Vitale always looks good to me. Two of his pictures above. 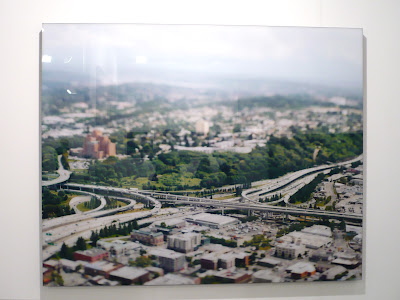 Tilt/Shift photography doesn't seem to be going away. This uninspiring piece by Frank van der Salm. 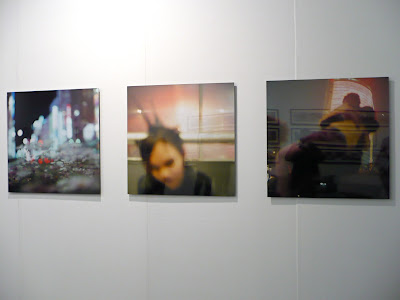 Also plenty of deliberately out-of-focus shots. These by Virgilio Ferreira. No comment. 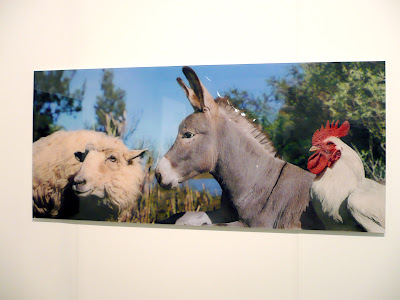 Much more interesting were a series of strange animal pictures by Juan Erlich. 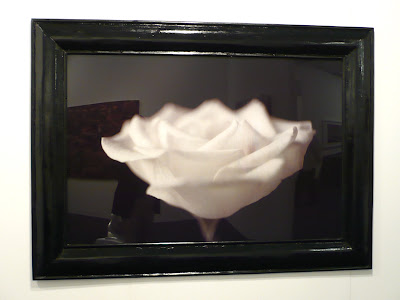 I'm always interested to see if anyone can do anything new or at least interesting with pictures of flowers. It's almost impossible and this is clearly not breaking any new ground aesthetically, but this large piece by Vittorio Gui has good wall presence, as they say. 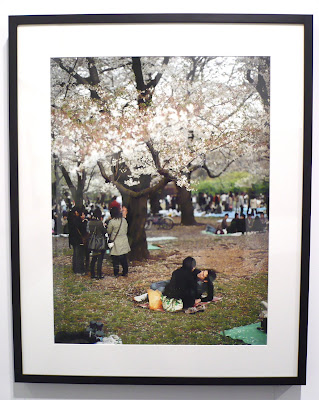 And finally for Photo Miami, Laurent Guerin, a Canadian photographer I had not heard of before, had a nice group of pictures taken in Japan and showed an interesting eye. He's the new name I would most look out for. 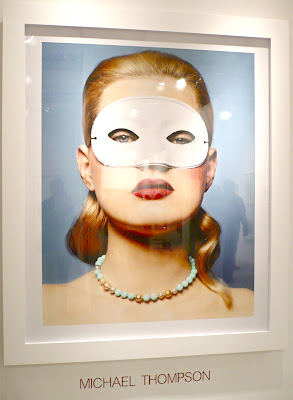 Across the road from Photo Miami was Art Miami where this striking large Michael Thompson greets you. 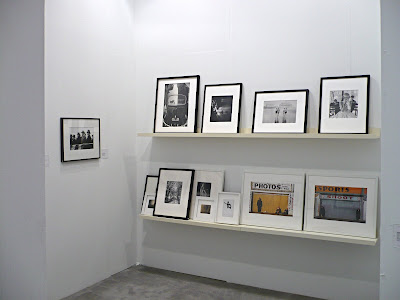 Bruce Silverstein had the most lovingly curated booth full of goodies. Here a little alcove of vintage prints. 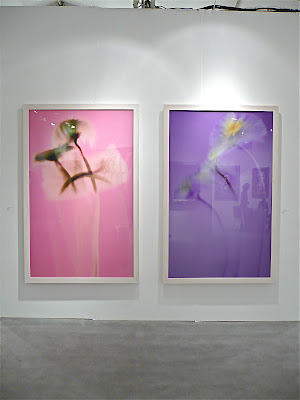 Still looking for flowers? How about these diaphanous images by Bill Beckley? 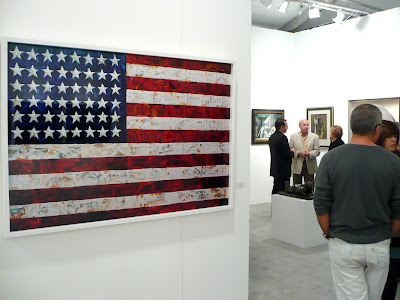 A Vik Muniz I had not seen before. 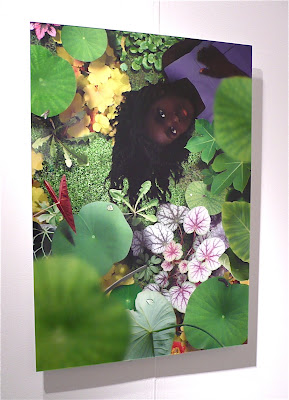 And finally, if I had $17,000 burning a hole in my pocket, this is what I would have bought. The first print in a new edition by Ruud van Empel. According to his dealer Stafan Stux, he will be showing more new work at the Stux gallery this coming March.

Posted by The Year in Pictures at 1:16 PM

I enjoy the blog, and I'm glad to see your first impressions -- I'm a bit disappointed that the AIPAD show isn't right next to Photo Miami like it was last year, such an interesting contrast.

Hi James!
I have been a follower of your blog for awhile now. I truly enjoy that you share such beautiful photos with us all. I love to visit your site. I love to paint, but I have to say, I am always inspired by the talent a photographer captures. Thank you for sharing yours and other artists works with us.

pretty nice, your site becomes one of my daily browses

James,
Ms. Van Putelaar's photo of the nude on the left reminds me of Annie Leibovitz' nude studies that she did of the atheletes not too long ago (check out her latest book for an anecdote about those pics), also of Elinor Carucci's nudes of herself and her mother and family. 3-D graphics looks promising for landscape photographers. For years landscape photographers have tried to give the viewer a "you are there" effect by printing their pictures bigger and bigger and bigger...however, the effect was still 2D. Hopefully that will change with the 3D graphics. The acid colored photos of architecture (primarily by German practitioners) have grown tiresome (check out the current Julien Faulhaber show at Hasted/Hunt if that is your thing.) The Vitales reminds me too much of Struth/Gursky, especially the waterfall pic. Love the Muniz flag...homage to Jasper Johns? Finally, I can't get into Ruud van Empel (too much like Loretta Lux.) Thanks for being our eyes and ears James. Keep us posted!
Raymond A.

Wow, so many different trends emerging -- and some fading away. There was much I liked, but I wish I could be there in person to see them all in context and in series. What was the Muniz flag actually a photo of, dust, paper, dirt...?

I agree with Raymond A above..good comments!

I love that Laurent Guerin photo of the people in Japan! Nowadays I go everywhere with a camera in hands but has yet to find a view like this. I guess I just don't have the 'eye' with the 'view'.

i love josef schulz. juan erlich is a genius. i love that image...i don't why but it breaks my heart. thank you for the intro to ruud van empel. this work is gorgeous!

Thank you very much Mr James.

As a great fan of Carla van de Puttelaar's work, I had trouble finding your blog because of the spelling - that's Puttelaar with double -tt-! (Also, it's 'van de' not 'Van', but that's less crucial for search purposes.)

Needless to say a misspelling doesn't alter your analysis in any way. I just hope you're wrong in one respect - that at least some art lovers will not hesitate and actually buy her photos.