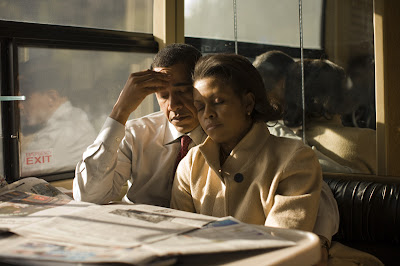 On November 6, I wrote a post about Callie Shell's photographs and the photo essay “The Campaign from Obama’s Point of View” in which I expressed the thought that a reference to Paul Fusco's "R.F.K. Funeral Train" would have been in order. In a situation like this, I half expected a response from the photographer, but there was no reply for a month and a half. Then yesterday I received this e-mail from Callie Shell:

Your recent blog post concerning my photographs from the Obama campaign has made some assumptions that are incorrect.

Firstly, because Michael George made a comparison of my work to that of Paul Fusco’s, you feel that I appropriated, imitated and ripped-off Mr. Fusco’s work.

I began photographing in this manner around 1992 during the presidential campaign - continuing on for the next eight years as a White House photographer. For me it has been a personal project and quite frankly a way to kill time traveling at full speed in motorcades, staff vans, buses, trains, helicopters or airplanes. I have continued this work since 2001 as a contract photographer for TIME.

As I’m sure you are aware Mr. Fusco’s essay was photographed in one day in 1968 and sat unpublished until 2001. The work was virtually unseen until the first exhibit in Perpignan, France in 2000 at Visa pour l’Image.

I am a great fan of his work but I didn’t copy him.

I also didn’t copy Robert Frank’s work from a bus, Lee Friedlander’s from a car or anyone else’s work for that matter.

Many photographers have effectively used a personal vantage point to make photographs, that hardly makes a case for appropriation or theft, as you imply.

Your comments as to the poetic or compositional height of my work as compared to his are well taken even in this apples and oranges comparison.

I couldn’t agree more. I didn’t edit this essay or have any control over it. I didn’t even know it was going to be put up on the site. It is definitely not the edit I would have made.

These photographs are indeed just O.K and to have said they were inspired by Mr. Fusco would have been an insult to his work.

My entire body of work is indeed inspired by the work of Mr. Fusco and many other committed photojournalists from whom I have learned so much from in my career. I feel the body of work I have produced for Time on the 2008 campaign says a lot more than the one site in your discussion.

In the journalistic world you have accused me of plagiarism, something that I don't take casually.

I would ask you to reconsider your initial post.

I wrote this reply:

Thank you for your e-mail. I had some reservations about posting the piece, mostly because I try to take pains not to use my blog to be negative. But as you perhaps realize, I am very close to Paul Fusco and his work and when the similarities were brought to my attention, I did feel somewhat indignant on his behalf.

On re-reading my piece just now, I actually think I was quite careful and measured in what I said, but nevertheless I am happy to hear your side of the story as well as to take you at your word. I will publish your letter right away without any further critique of the work. Would you like to send me a selection of j-pegs of what you feel are some of your best Obama pictures? It would be nice to run some of the pictures that you would personally select.

Lastly, I would be happy to meet in person either at the gallery or at a more convenient place for you.

I have not received a reply. So I took in on myself to look up what I could of Shell's work and reconsider my initial post as requested.

As you can clearly see from the the pictures above and below, Ms. Shell is indeed a talented photographer who reached the heights in her longstanding coverage of Obama himself. With regard to the Fusco point, however, I think she doth protest too much. Neither Frank or Winogrand's pictures have the same photographic perspective or political context to Shell's TIME photo essay whereas Fusco's do. As to the edit being out of her hands, that should be a lesson for every photographer.

I hope one thing readers of this blog have come to see is that I try very hard to use the blog for sharing a love of good photography, not critical dismissal. So while I still stand by my original post on “The Campaign from Obama’s Point of View”, I'm absolutely delighted to share my new appreciation of a larger view of Shell's work and I'd be happy to exhibit a good edit of her work.

P.S.
On November 17, I did post another of Shell's pictures that I considered a "better" picture and a link to a better selection of her work. Click here and scroll down. But I understand and appreciate her need to address the earlier post. 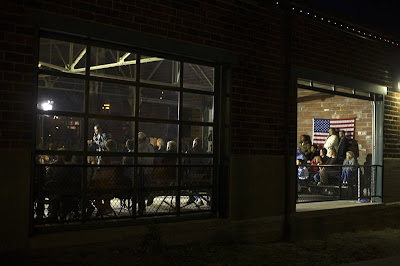 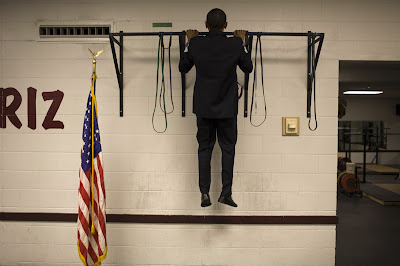 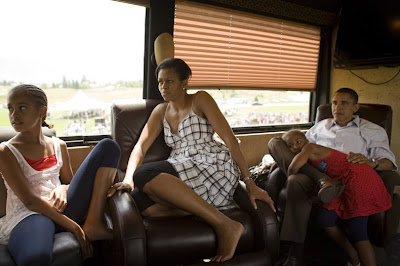 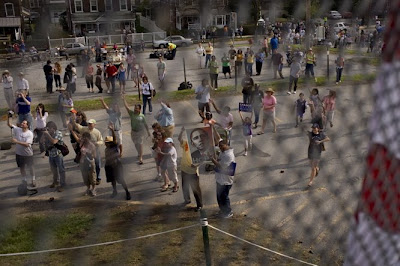 Intentional or accidental, the similarities to Fusco's work should have prompted the editors to offer some kind of explanation. Otherwise they invite the kind of questions you raised...

The whole who did what first thing is so common and fraught. So many times I have taken an image only to find later that it is almost identical to the work of someone better and more successful. Your blog is a viewpoint and should be accepted as such, although I felt her reply was as measured as your post, I suspect that is why she waited, a little distance between feelings helps. A debate such as this is far healthier and more interesting than a blog of blind sycophancy.

"Many photographers have effectively used a personal vantage point to make photographs, that hardly makes a case for appropriation or theft, as you imply.
"

I cannot but agree with Callie Shell. I love Fusco's book, and might go as far as saying it's my favourite photography monograph, but to accuse her of plagiarism despite the obvious similarities is pretty ridiculous. I thought this already after your, and Michael George's, initial posts regarding her TIME essay.

There are tons and tons of motifs out there that get repeated again and again and often deservedly so as the photographers are not working on the same subject matter.

I do not deny that the RFK Funeral Train came to by mind as I saw Shell's work on the TIME website, but I found this reference only to strengthen my appreciation of her essay:

Obama is not RFK. But there are all those political, historical and should I say oratorical similarities between the two that resonated in my mind while looking at Shell's work and comparing it to Fusco's:

It is as if Obama has brought hope to all those people who have often felt ignored. Just like RFK did. Fusco's images showed the great admiration RFK had among among the poor and African-American communities. But ultimately, the images were sad as they represented a kind of 'death of hope' and undelivered promise.

One could say Obama brought that same 'hope' alive again, and instead of Fusco's Funeral Train we had Obama's bus and the people rejoicing and witnessing the deliverance of the RFK promise.
It was as if Obama was carrying RFK's torch.

And lastly, the Obama-bus images also resonated with the great fear many people had for his personal safety. People did not want to see another funeral train again.

So instead of plagiarism, I would praise Shell for such resonating piece of work. Whether it was conscientious or unconscientious on her behalf, does not really matter.

What no-one has commented on so far is that you have been fair and careful in your words. That is why I like and follow your blog.

Thank you for your fair and open-handed approach to this subject. I remember feeling a bit unsettled on reading your first post, even though I didn't know the photographer. Her response helps illuminate what was unsettling about the original post. And the photographs you published today put an end to the discussion.

What a great shot of prez-elect getting in a few pull-ups!

Mr. Danziger,
I've enjoyed your blog over the past few months and have you bookmarked.
It's not a unique masterful expression to take pics from a train or bus that people are waving at and watching.
I think you owe Ms. Shell an apology. Period. No explanations, no justifications, no fancy footwork. Step up, she deserves it, and so does the integrity of your blog.

Get over it people. Callie Shell's pictures are totally a Fusco rip-off.

Sounds to me like a storm in a tea cup.

I don't see any negativity-I see a learning experience, so thanks to everyone.

This post brought me to Fusco's work, which I had not seen before. In one way or another, all photographs are photographs of photographs. Sometimes it trickles down, sometimes it trickles up. It's usually when influence trickles down that people object. I'm glad to have been made aware of Fusco's "R.F.K. Funeral Train," which is so moving. I cannot find anything similar in Shell's photographs. Fusco's work is not threatened, and maybe the comparison shouldn't have been made--though, again, it did bring me to the art.

I didn't know Shell's work at all until your blog. I clicked over to her site, and looked carefully through each photograph in that series, enjoying them immensely. I also posted one on my blog, with a link-back to hers.

As a rank photography amateur, I appreciate Shell's skill in bringing to light places and people in the campaign in an interesting and revealing way.

The controversy about imitation, plagiarism, rip-offs seems to be at a remove for me. I thought her work (and I looked at the entire series) to be masterful. I appreciated very much your highlighting her work on the blog.

I think there's room enough in the world for different streams of thought/creativity/work, even if there's some echoing.

My professor when I was getting my MFA (in writing) noted that much of what we creative types do is redundant, but that the body of work will stand as a final testament (or not) of our skill.

Although it's early in the game, I'd venture to say that Shell's skill and talent is evident, pleasing and I'm glad to have been introduced to her via your blog.