Miami, Day 2 - Through the Looking-glass 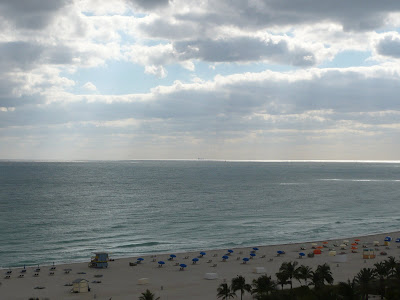 Day 2 in Miami. The temperature now creeping into the 70s! (Life is tough.)

For my second day in Miami I decided to go against traffic and visit NADA (The New Art Dealer's Association) and SCOPE and hold off on Miami Basel until today. The buzz around town is that business is, not surprisingly, pretty slow. So in the cyclical nature of things, one wonders whether this is the beginning of the end of the art fair cycle. As far as I'm concerned, it wouldn't be such a bad thing to get people back in the habit of going to galleries where they can see work in greater depth and pay it more than a nanosecond's attention. 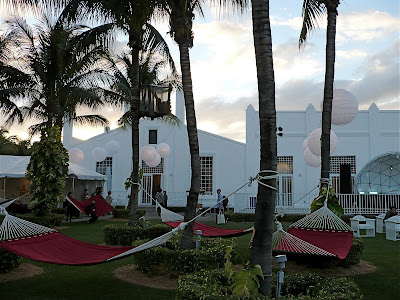 The NADA pavilion is definitely the prettiest space in town. You enter past a row of hammocks, there's usually live music playing, and then you enter the domain of the youngest, hippest, most art-schooly dealers from around the world. It's totally mixed media and photography is quite prevalent, but, boy, does most of the photography seem meaningless. If one takes Malcolm Gladwell's maxim that one of the keys to success is 10,000 hours of practice at one's craft, many of the photographers exhibited seem like they've been working at it for about 10 days. 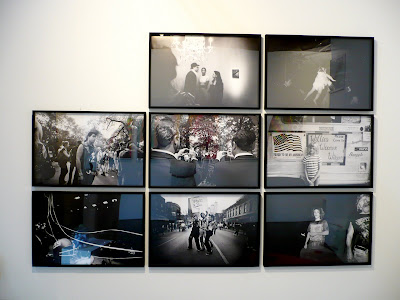 Case in point - as you walk in this is the first artwork that greets you. An installation of photographs by Cheryl Dunn. Is the meaning in the missing picture in the grid? 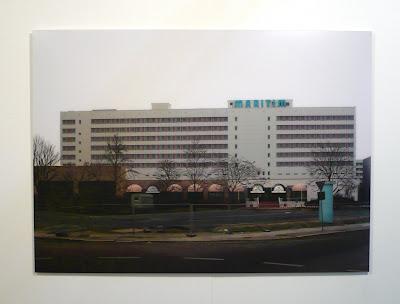 But my prize for the most meaningless, banal, unimpressive photograph goes to this picture by Adrian Sauer. Can anyone tell me what's interesting about this picture? 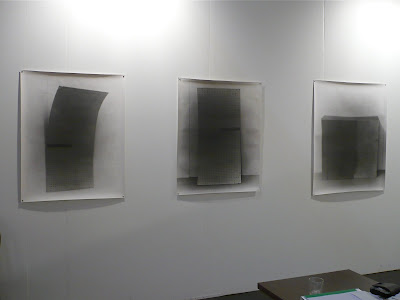 Only marginally better were these pictures by Becky Beasley. But I get it - no content is the new content! 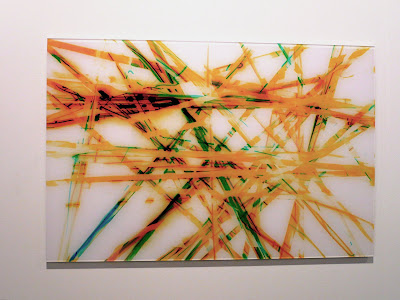 In case I'm sounding like a curmudgeon, you must trust me that I'm only showing the more interesting stuff. This picture titled "Blank" by Catrin Andersson. 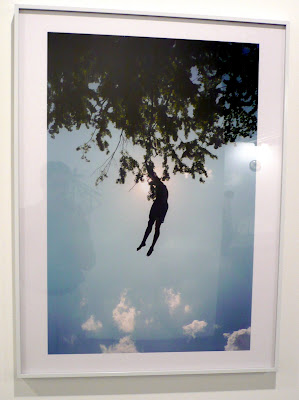 Better is this by Peter Sutherland. 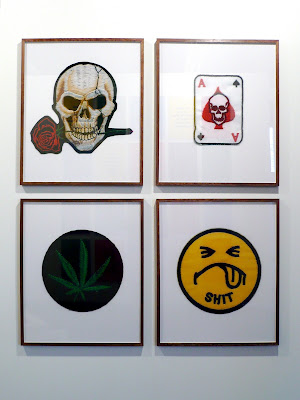 However, I don't really get these are large photographs of patches by Alan Kane. 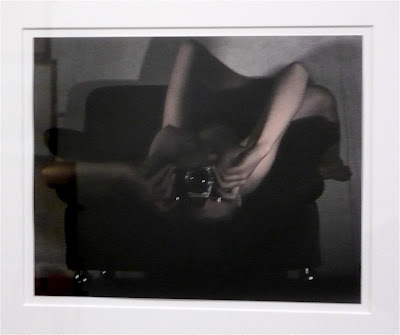 Janice Guy, who was recently featured in the Met's “Photography on Photography: Reflections on the Medium since 1960” show. It's doubtful that many people would know this is from a series of self-portraits taken in the late 70s. 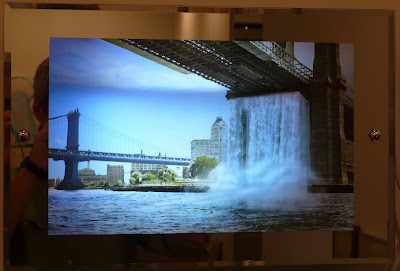 I thought this was a funny and well executed idea. Ian Burns took one of those tacky light-boxes you see of flowing waterfalls and inserted a cut out to make it a view of Olafur Eliasson’s "New York City Waterfalls". (I wish Eliasson’s falls had been this sumptuous!) 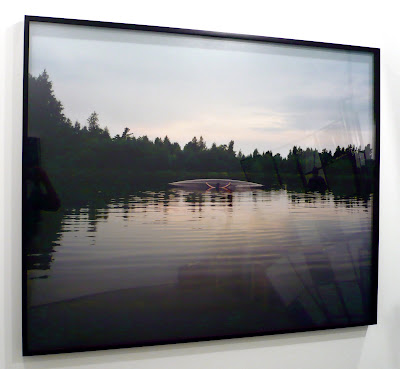 Last thing seen as I was leaving NADA, a "new" picture by Melanie Schiff. I say "new" because it looks very much like an out-take from pictures I commented on last year, but I remain a big fan of Schiff's (in spite of the very mixed comments her work received when I wrote about it recently.) Click here. 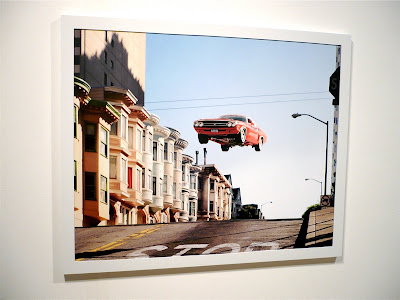 Next stop was SCOPE which I'm pleased to say was unusually well-organized (they're not always) and full of good things. First up as you walk in, a line of mostly new pictures by Matthew Porter from his flying car series. 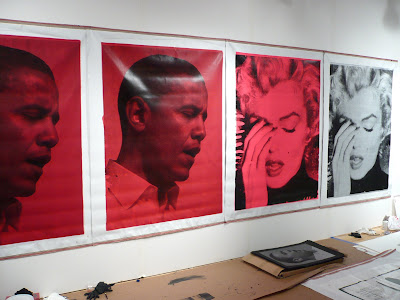 Another booth features work literally in progress by Russell Young who's been unapologetically working in the Warhol idiom for many years. The point is (I think) that large silkscreens of iconic public figures never fail to engage. 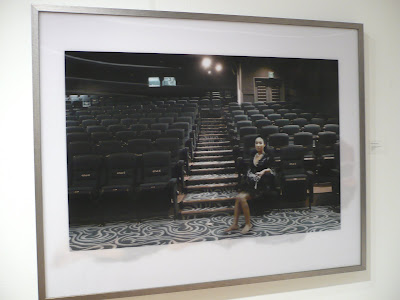 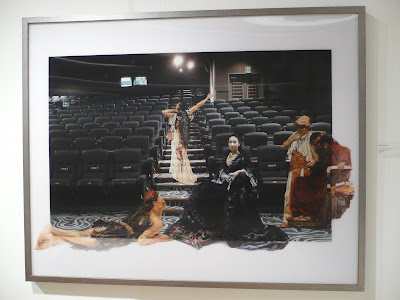 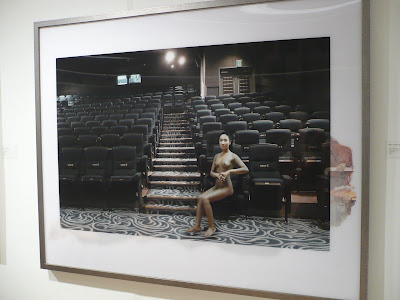 For those interested in lenticular technology, this single piece by Bae Joonsung which I shot from three different angles was technically quite impressive. 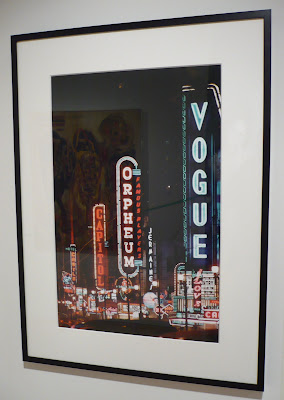 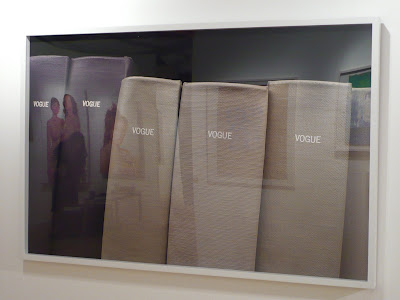 And finally, Anna Wintour should be pleased to hear that the word VOGUE was very much in the house. Top, by Fred Herzog. Bottom, by Mickey Smith.

That's the Day 2 report. Next up the big guns of the Miami Basel fair.

let your inner curmudgeon out. it can be healthy sometimes:)

I think you may be right about it being the end of the art fair bubble.

I love the second photo down.

We are not showing this year but the boss is there with our directors.

It's nice that you are taking photos though. We never get to see what the other booths are showing. Some of these are great.

James,
OUCH!! "Many of the photographers exhibited seem like they've been working at it 10 days!" That HURTS. The Cheryl Dunn, the Adrian Sauer, the Becky Beasley, the Catrin Andersson...banal? Yeah, okay. But what is the cause of this banality? I think that most of these kids went to expensive art schools and came away with the same ideas that were bounced around amongst the students and faculty ingrained in their subconscious. It is like trying to write a novel or a screenplay and being influenced by the current book or movie that you are reading or viewing. Art schools have become echo chambers. I'd like to hear your professional/personal take on this topic one day in a post.

Also, I disagree about the Peter Sutherland photo. I think it is visually arresting (at least on my laptop) and hints at super hero stories, Robinson Crusoe and even Lord of the Flies. I'd like to see more of his work, this time in context, not just one shot. Could be fun.

Oh, about Ms. Schiff's pictures: Sorry, but I have to agree with a majority of your bloggers about this one. I too am tired of the exhibitionist Wolfgang Tillmans/ Ryan Mcginley/Terry Richardson school of photography. Seems so contrived, a Look at Me aren't I special attitude prevades her photogrpahy. Just does not seem genuine, like the Larry Clark/Nan Goldin/Robert Mapplethorpe school. Those people really were immersed in the lifestyle that they shot, which gives their pics a sense of gravitas and compels one to look, even when one's gut instinct is to turn away. Ms. Schiff's pics just make me sigh.

Lastly, James, I recall a post a while back about bad gallery press releases for new shows. Here is one for the Richard Mosse show at Jack Shainman gallery: "A plane crash, like any disaster, is a moment of contingency and confusion...an airliner in vertical descent is a symbol of modernity's failure...it is a mainline to human fear, something horrifying but also aesthetically powerful and symbolic of unstopable globalization." Okay, so what is wrong with this press release? Check out the photos on Jack Shainman's site. I saw the show and did not feel ANY of the fear described in the press release. The pics of the fake airplanes on fire seemed about as fright inducing as an ashtray ablaze. Now, that picture of MATHEW PORTER'S FLYING CAR... SCARY! I love how his work channels the real fear of flying, Steve McQueen's BULLIT movie and 9/11 (fear of the unexpected --just what the hell is that car doing flying down a hill? Someone is going to get KILLED!!)
James, keep up the posts.
Raymond A.

Thanks for your always considered posts. I did not mean to say that all the pics included were banal. I also liked the Sutherland, which is why it was included. (I'll add a clarification.)

Many of the other NADA images were the best of the wurst (as they say in Berlin)! I always try to make this blog as positive as possible no matter how trying the circumstances.

I really enjoy that Peter Sutherland photograph, I remember reading a biography of some German painter who painted landscapes upside down, with the foreground the 'correct' way up, after tripping out on some dubious substances!