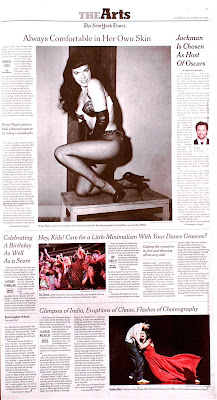 Sometimes The New York Times really does take you by surprise! I was sitting at home Saturday morning reading all the bad news in the paper when I got to the Arts section and va-voom ... this was the front page they had put together to report on the passing of Bettie Page!

Bettie Page was not generally known in the 1950s when this picture was taken. She came into pop-cultural consciousness in the late sixties as a symbol of the hypocrisy of the previous decade. But as often noted, it was her ability to appear wholesome while being photographed in all manner of S&M poses that was the source of her appeal. Counter to this notion and in the context of the great American pin-up, she was probably the first person of any name recognition to hint at the possibility of something pleasing and erotic in the unconventional. Sadly, she never seemed to have had much happiness in her life, but her pictures gave a great many people pleasure including, apparently, whoever at The Times was responsible for this layout! 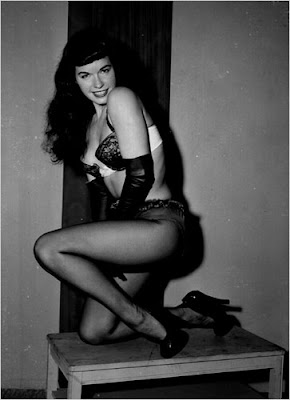 aw, RIP. She was and will remain an icon.

The descriptions of her are so true, I find that as a woman I can relate to her; maybe because she looks and
acts natural. As much as you can, while holding a whip. And no photo shop. Wow. Many portraits these days, feel so void of life. May she rest in peace.

this was sad. so beautiful and so influential.