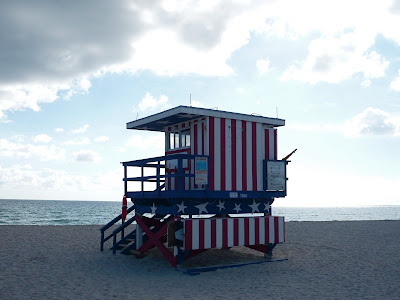 I'm now rushing to check out of my hotel and head back to New York so I'm forced to be somewhat brief. And the weather is now the best ever. Too bad.

As promised I went to the big fair yesterday and as soon as I pulled out my camera a fair-goer said to me, "How did you get that in? They took mine away." Turns out they were confiscating all cameras, but my trusty Lumix was in my back pocket and so what you are seeing are truly contraband pictures. But I had to be circumspect, hence a somewhat abbreviated selection. What I do for this blog ...

As you'll see, however, there's an altogether different aesthetic as far as photography at Miami Basel is concerned. More conceptual, slicker, and certainly more expensive. We can get into the reasons behind all this at a later date. With the down economy, fair-going was actually extremely pleasant. And one encounter which I'll write about later could have some important future implications. But now for a highly edited selection of the pictures that caught my eye. 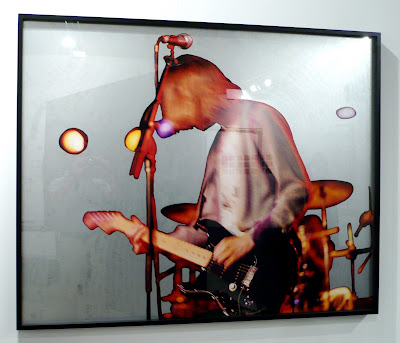 Kind of a cool Slater Bradley. 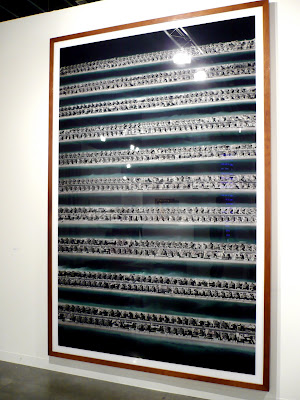 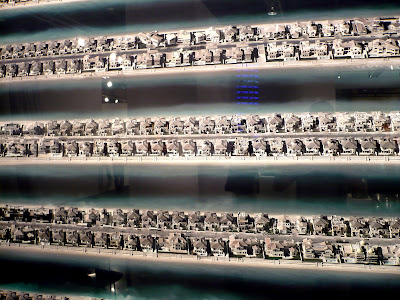 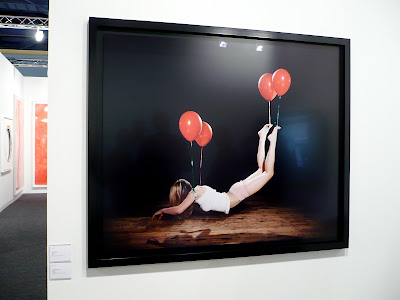 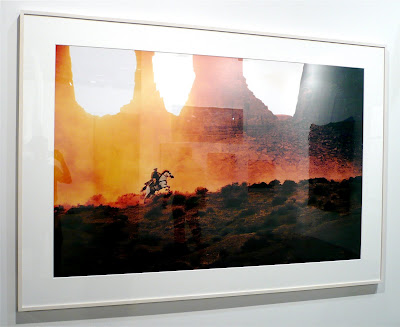 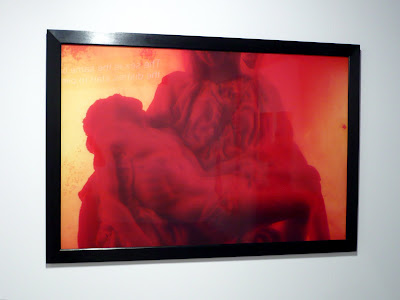 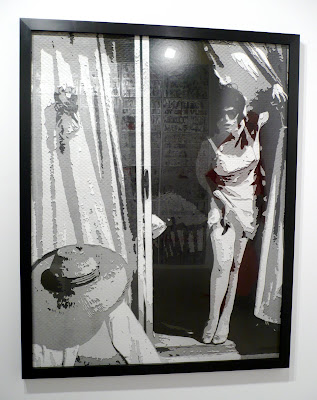 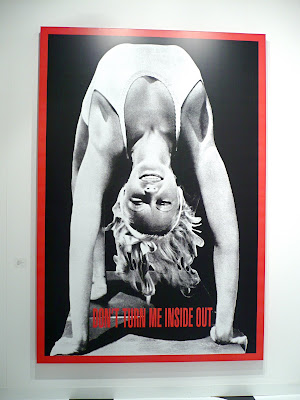 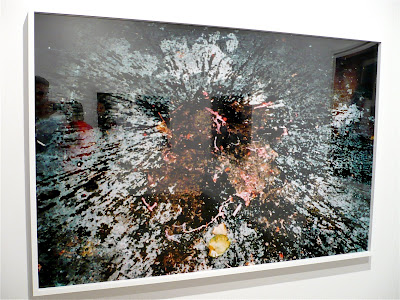 Then Dash Snow had to go and ruin things by being supercool and making this picture of throw-up. (Grow up, I say!) 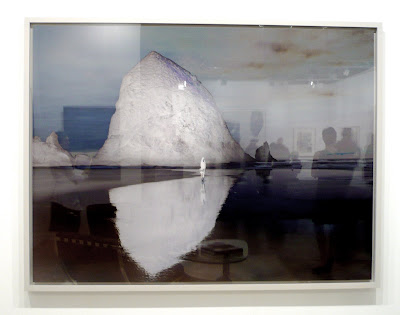 At Fraenkel, who always have the best booth, this new Misrach - a preview of his new body of work to be shown next year. 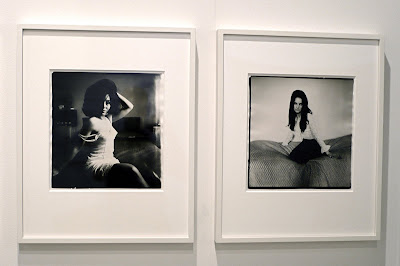 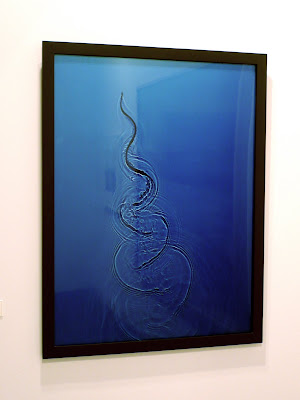 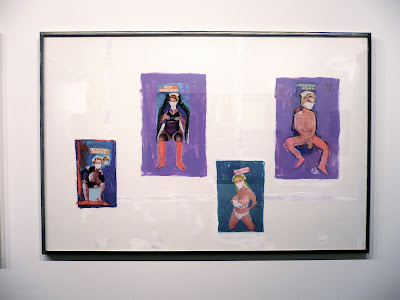 The ubiquitous prize goes to these Richard Prince nurse collages which were simply everywhere.

And that's my big fair report. 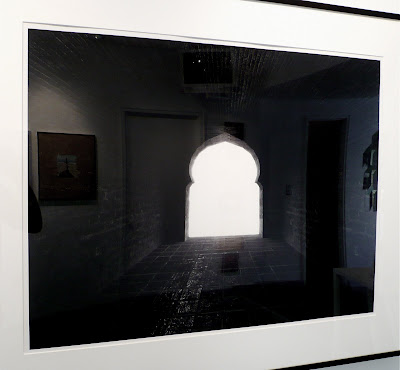 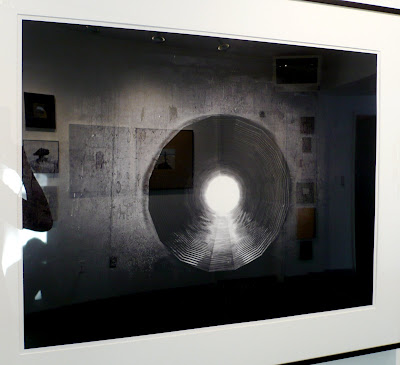 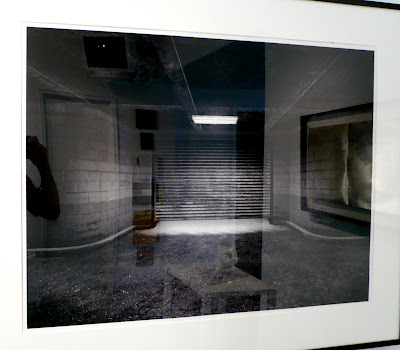 My last stop was AQUA, one of the fairs held in a hotel with dealers displaying their wares in their rooms. It's loose, fun, and often worthwhile. These three photographs which look somewhat Sugimoto-esque were created out of a video game, but beautifully printed and presented. The artist is Oliver Warden showing at Boston's O.H+T gallery.

And last, but certainly not least, one from a set of barnyard photographs that look like the animal cast of a nativity play taking a bow! Rob Macinnis at Katharine Mulherin Contemporary.

i LOVE the barnyard pic!

thanks for sharing these - fabulous!

First,
James, thanks for the clarification on that last post. Also, thanks for taking the time to keep us photo nerds informed on the current happenings in the photo world. Finally, thanks for the bootleg pictures! You must have felt like a political dissident smugling suppressed news to the free world. Now, as far as the content of that smuggled information, I've noticed two trends: old reliables and the shock of the almost new. Richard Prince's Marlboro Man, Barbara Kruger's words on pictures, Serrano's Piss Christ, and Sam Taylor Wood's floating self portrait are yesterday's news, stuff cleared out from the attic. However, the Gursky is interesting. Gursky has long used digital technology, mainly to clean up a scene, punch up color, or just to print big. Lately, though, he has used digital technology to not just take a better photo but to create a new photo using existing photos. The photo show shown on your blog is a "visual riff" on one long photo of a coast line, multiplied many times to create, much like a painter creates a painting, a new pictorial entity. In this case the final photo tackles Gursky's old theme of consumer culture (real estate) made to look like a flag (American maybe?) Is he commenting on the capitalist West's obsession with wealth and privilege, the false god of tangible material possesions that is suppose to buy security and stability but can we swept away at any minute by the tide? Something to ponder and a good visual metaphor and variety of artistic approach on his part.

Vik Muniz, for his part, continues to intrigue with his visual alchemy. With his photo of Cindy Sherman, he has reached the hights of "Meta-Photography." He has made a photo of a famous Cindy Sherman photo, which in itself was made to look like a fake photo from a film still. It is like looking at a funhouse mirror--reflection upon reflection. Again, great meditation on a signature style from a mature artist.

Richard Misrach has a signature style: color landscapes. This time, however, he has tried a little too hard to add variety/maturity to his oeuvre. The acid trippy look of his new works is sophomoric and unrelated stylistically to his body of work. I feel bad for him. Aperture magazine has a spread this month of his new work. The article says he has stopped shooting film and gone digital. It also tries to connect his new work with the photograms of Man Ray. I am curious to see the press release for his new show. I want to read his conceptual justification/interpretation for his choice of such a radical new look to his pics. Vik Muniz, in a show that opened this month, also departed from his style by showing picture frames turned to conceal the pictures. Bad choice.

The Adam Fuss pic is heavenly. An old picture but he does the photogram thing to stunning visual/ intellectual effect. He is what I call a poet of the Metaphysical School of photography. The Meatphysicians of photography include: Duane Michaels, Christopher Bucklow, Bill Jacobson, Susand Durgess, Joel-Peter Witkin, and Sally Mann. What draws these artists of disparate visual styles together is a concern with things "beyond the physical." They tackle issues of consciousness and the soul. They ask, What remains after the tactile has turned to dust? Mr. Fuss' pic of the snake in the water calls to mind birth/death, the material/immaterial and the role of water to our existence and the beginnings of the planet Earth.

Lastly, I almost cried when I saw the Arbus pictures. Seeing these women in their wan poses reminds me of the famous Arbus quote concerning her photography. She said, "I photograph the space between who someone is and who they think they are." It is this concern, this contradiction between what people perceive themselves to be and who they really are that is the most humanizing and most touching aspect of her photography. Susan Sontag said Arbus' pictures are anti-humanist because they fail to arouse compassion. I disagree. Look at these women in the photos: they so desperately want not only to look like Liz Taylor but they want to be Liz Taylor...to escape their prosaic surroundings and go to a world where being Liz Taylor (or being mistaken for Liz) confers a sense of aristocratic privilege. But somehow we get the feeling, by the blank stare in one picture and the over the top sultriness in the other, that they will always be what they have always been. Nothing more. It is that moment of realization that links them with the rest of humanity...we are them and they are us, in some small measure.

Welcome home,James... back to the cold reality of New York City. Keep blogging.
Raymond A.

Pretty unipressive. So neat, so predictable...
Thanks for sharing that view on the current market though. Even if I saw some burried treasures there, Paris Photo wasn't better.
Hard times.
SL

After reading Raymond's post I find I really am at a loss for words which is actually a rare thing.. I find I am going to stick with what I say best here. I love your blog. I learn from it tremendously ( although I fear Raymond's post may require a class) and I am glad you are still here
Linda

really appreciating your views and opinions - finding your blog as much educational as entertaining these days.

i'm really obsessed with slater bradley. crazy smart. barbara kruger amazes me. i thought back in '94 that there was no way she could keep this work moving forward / relevant. i could not have been more wrong. i agree with you re: this dash snow and some of his other work...but sometimes he's so artful!!! we have a polaroid by snow. it's a straightforward picture...but every so often it alters itself. i know that sounds crazy but it's true! so i'm kind of a fan. i love vik muniz. that said, his take on cindy sherman seems too easy. i'm rambling.

love this round-up, thanks so much, james!

It would be educational to hear from a gallery or art dealer standpoint what makes some of these images so great....the ensuing debate could fill volumes