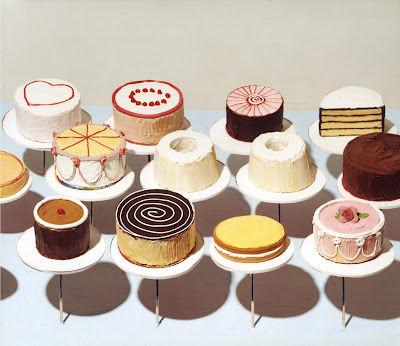 Sharon Core, a 1998 Yale MFA grad, sprang into the art world’s consciousness with her 2004 show at Bellwether Gallery, “Thiebauds”. A photographic re-creation of the artist Wayne Thiebaud’s famous food paintings, Core reversed the conventional practice of paintings copying photographs by painstakingly baking, coloring, arranging, and lighting her re-creations and then printing them the same size as the Thiebaud originals.

Four years on and now showing at Yancey Richardson, Core has found new inspiration in the 19th century still life paintings of Raphaelle Peale. Unlike the Thiebauds, however, this time Core has not copied specific paintings. Instead she has analyzed Peale’s work in terms of subject matter, composition, coloration, lighting, and scale in order to understand exactly how they are made and then proceeded to create her own new works in an act of art historical homage.

It’s a difficult feat to pull off, but Core has succeeded where many others have failed, primarily by the softness of her lighting and her mastery of 19th century composition and perspective. As Core fully understands, if you’re going to go for it, you’ve got to go all the way. 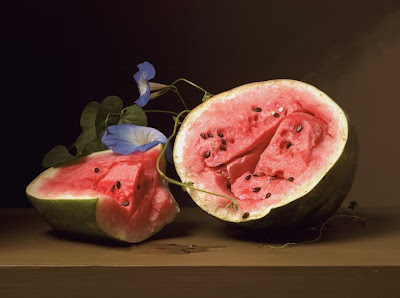 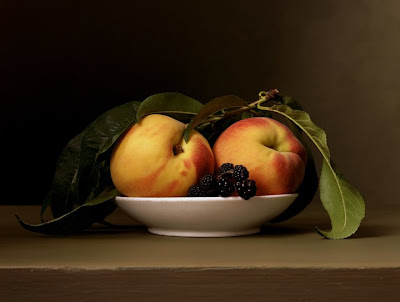 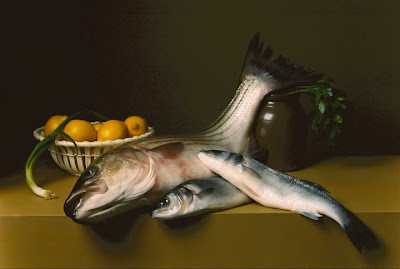 Posted by The Year in Pictures at 6:38 AM

Oh wow. Wow. These are beautiful. What a talent. I have so much respect all the work that goes into creating such wonderful images.

These are really wonderfully done - I laughed immediately at the "Theibaud" image because I couldn't tell at first if it was a photograph.

The still lifes are also remarkable. I've seen other efforts to reproduce these (right down to the bugs) but these efforts have captured only frozen time, not the sense of passing time found in the originals.

Thanks for introducing us to Sharon Core's work.

Gimmick! Big deal. Core's artistic talent is more suited to being a magazine art director than a fine art photographer. Why is the art world lauding her?

this is so great-looking. i love this work. thank you for the intro to sharon core!

Gimmick . . . What ISN't a gimmick? We build off of everything in life. It looks great and it works. mdowdy00@hotmail.com

I love Thiebaud! She recreated it in photograph? wow. I like the Peale's though ...it's maybe a better idea.

What isn't a gimmick? How about photojournalists roaming the country and the world capturing decisive moments that speak to our humanity, the cultural zeitgeist? All Ms. Core is doing is some clever commercial food styling, mimicking images conceived my much greater talents. It doesn't even get close to the staging of Muniz, Wall or Crewdson. It's literally taking famous paintings and copying them using the same materials. It's a gimmick. She's good at it, but it is what it is.

Why do the critical comments always use a)"gimmick" and b) anonymity?

Mark me as a fan of Ms Core.

BEAUTIFUL. i love these.

For russell, from scott ely: Fidelity is one of my favorite ingredients of visual laxatives.

I agree with you, James. I like Ms. Core's photos. I feel she has added another chapter to the post-modern photographic tradition of undermining the notion of the camera as purveyor of verisimilitude. In other words, what you see is not necessarily what you get (think Vik Muniz.)

Painting was always considered the highest form of artistic expression in the plastic arts; photography, since its invention, was hardly considered art at all. Yet, ironically, the Dutch old master painters made ample use of the camera obscura, a precursor to the modern camera, to give their paintings a "real life" look. In the modern era, painters made use of photos to also give their paintings a "real life" look (think Richard Estes, the photo realist painter.) But in both cases, the painting was the final product, revered and held above all other art forms. Now, in the post-modern era, artists such as Ms. Core are subverting the previously held belief of the primacy of painting. By having the final product be a photograph she is asserting the primacy, or at least equality, of photography with all other art forms, especially painting. And doing so by throwing a wink and a head nod to the old school "Old Master" painters that came before her. Brilliant!
Thanks for the space to let me rave, James.
Raymond A.

this is so great-looking. i love this work. thank you for the intro to sharon core!usagamezone.blogspot.com