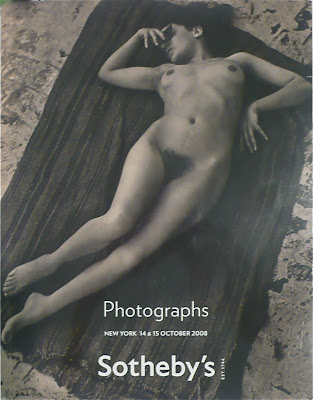 Catalog time is always fun. Having been in the business a long time and knowing all the players, it’s interesting to see what each house puts on the cover and what the subtext is. I'll get to the above cover shortly.

Christies have recently tended to go with sexy, fashion-y images and now own that sector, but they have taken a serious turn this season with a Vik Muniz (estimated at $30,000 - $50,000) on their Contemporary Photographs sale cover, and a Harry Callahan experimental Chicago image on the cover of the general photographs sale. (Estimate $25,000 - $35,000.) Having won the fashionista battle but lost out on some heavyweight collections it’s a signal that they’re back to fight on the classics. 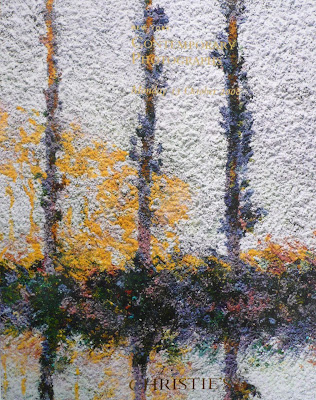 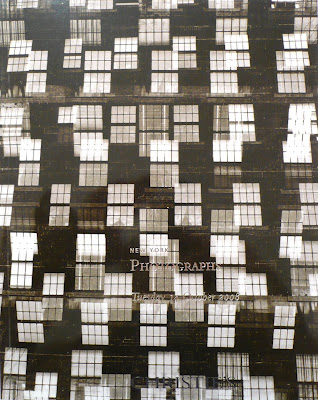 Phillips, still a relative newcomer, weigh in with a silver-toned reproduction (bearing no relation to the original) of Helmut Newton’s table-top portrait of Charlotte Rampling. The message - “Look at us! We’re edgy, we’re glossy, we’re sexy (but also expensive)." (Estimate - $120,000 - $180,000.) 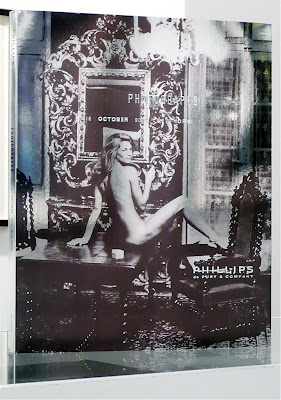 Bloomsbury, a genuine newcomer holding their first sale in New York, have to my mind the best cover with this striking central detail from a larger picture by Ruud Van Empel. (Estimate $35,000 - $45,000.) 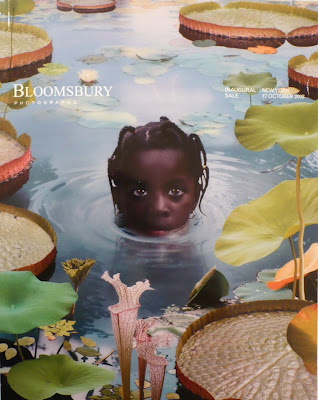 Now back to the top photograph. Sotheby’s go from staid to sensationalistic with the Edward Weston of Tina Modotti (estimated at $250,000 - $300,000). I’m pretty sure it’s the first time anyone has put a full frontal nude on the cover of their catalog so it’s a bold message signifying that they can do it all!

Investment wise, however, if I had to put my money on a single artist, Edward Weston would be my guy. At sub million dollar prices – which his very best works are still available for – I firmly predict this would be one of the safest places to park your money while waiting for the banking crisis or indeed the U.S. economy to recover. You betcha!

“Tina on the Azotea” was made in 1924 on the terrace of the house Weston and Tina Modotti shared just outside of Mexico City. Sotheby’s catalog information helpfully fills in the story behind the photograph:

Weston may have encountered the charismatic, talented, and politically outspoken Tina Modotti as early as 1919 or 1920 in California. Both were married at the time of their meeting: Weston to the former Flora Chandler, the mother of his four sons, and Modotti to the poet Robaix de L'Abrie Richey. Weston and Modotti's affair was already established by July 1923 when the couple sailed, along with Weston's eldest son Chandler, to Mexico. They settled into a small house on the outskirts of Mexico City, and it was there that Modotti took up her complex role as Weston's lover, muse, apprentice, and guide to the vibrant ancient and modern cultures of Mexico.

Mexico stimulated a change in Weston's work. Whether it was the clarity of the Mexican light, or his contacts with a new and exciting group of Mexican and expatriate artists, Weston's photographs soon became characterized by a greater amount of detail and an almost obsessive attention to the object in front of his camera. This change in vision necessitated a change in his technical approach to photographing, and in June of 1924 he purchased a lens that could stop down to a narrow aperture, allowing him to capture his subjects in sharper detail. In his Daybook he wrote, 'For 25 pesos I purchased a Rapid-Rectilinear lens in a cheaply made shutter. Now I start a new phase of my photographic career with practically the same objective that I began with some twenty years ago. My expensive anastigmatic and my several diffused lenses [standard tools for the Pictorialist photographer] seem destined to contemptuous neglect, though it may be that I shall dust them off for an occasional portrait head. The shutter stops down to 256; this should satisfy my craving for more depth of focus.'

Thus equipped, Weston attempted to take studies of clouds the following month from the roof of his house. When the rapid movement of the clouds through the sky made it difficult to capture them photographically, Weston found new subject matter close by, producing the group of photographs from which Tina on the Azotea almost certainly comes. He wrote, 'My eyes and thoughts were heavenward indeed—until, glancing down, I saw Tina lying naked on the azotea taking a sun-bath. My cloud "sitting" was ended, my camera turned down to a more earthly theme, and a series of interesting negatives was obtained. Having just examined them again I am enthusiastic and feel that this is the best series of nudes I have done of Tina.'

In Modotti, Weston found someone who broadened his horizons, as Margrethe Mather had done for him in the previous decade. Through Modotti, Weston was introduced to a world of people and ideas he would not otherwise have known. Modotti—whose own mastery of the photographic medium is unequivocal —posed for Weston throughout the duration of their relationship. Weston's early portraits and nude studies of Modotti were done in his individualistic early 1920s style, a style which had progressed past the standard vocabulary of Pictorialism but had not yet entered fully into Modernism. 'Head of an Italian Girl' and 'The White Iris', to name just two pictures from early in Weston's and Modotti's relationship, possess a lush, sensual, and romantic beauty. The study offered here, no less beautiful and made only a few years later, incorporates a radically different photographic approach. Taken outside the controlled confines of the photographer's studio, and incorporating the disarray of the blanket on which Modotti rests and the roughness of the terrace, the photograph places Modotti's beauty firmly within the corporeal world.

A series of nude studies that Weston would begin a year later—of Anita Brenner and Miriam Lerner—would take the photographer further into the realm of objective Modernism. Now icons, these studies would lead, in turn, to his tour-de-force studies of shells and peppers. But the frank sensuality embodied in Tina on the Azotea would never be as fully realized in Weston's later work as it is in this photograph. 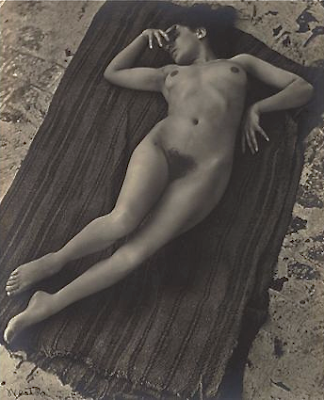 An interesting sidebar to the above. I was recently looking at Kim Weston’s website (Edward’s grandson) where in addition to his own photographs you can find his father Cole Weston’s posthumous prints of Edward’s photographs. Observant readers of this blog may remember that I’ve always been a particular fan of Edward’s “nude in the dune” series from 1936 and there was an image (below) I had never seen before. Does it remind you of anything? 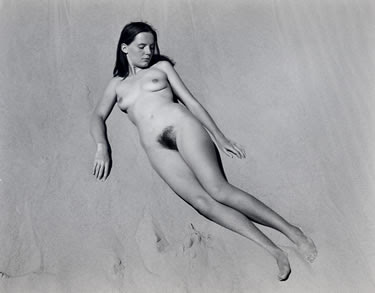 Actually Philips beat Sotheby's to the honor of being first catalog with full frontal nudity. We were treated to 3 front views of Kate Moss by Chuck Close covering the April 9,2008 Photographs sale.

I have never seen that Weston image of Charis. Amazing. Thanks.

It reminds me of the Katy Grannan's book cover for "Model American".

And thank you for the continued insightful, fresh posts. I always enjoy reading them.

The award for full frontal nudity must surely go to Phillip's October 2005 photography catalog, featuring a lovely Florence Henri female nude on the front and an Eggleston male nude on the back. As I recall the Henri sold mid estimate and the Eggleston bought in. If I had the chance, though, I'd trade both for the Weston at Sotheby's.

Clearly I haven't been keeping good track of Phillips' predilection for frontal nudity! However, the new regime there (Charlie Scheips, formerly of the Conde Nast Archive is their new director of photography) is uncharacteristically but becomingly modest.

does it remind you of anything?

yes it does. ryan mcginley.

Catalog time IS fun! I love thumbing through them. I never really paid attention to the covers though...as far as what the auction houses were trying to convey but it's a good point. I tend to usually like Christie's the best.

did anyone think of Antonioni's "Zabriski Point" when viewing this photograph?

Just read a beautiful thought about the difference between erotica and pornography the other day. Would like to share it with you. It says... PORNOGRAPHY has one taste....
EROTICA has layers of taste which you unfurl every single time.