Goodbye to all that... 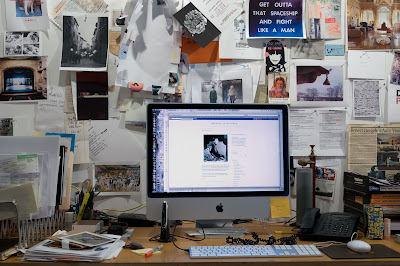 About six months ago, the photographer Joseph Holmes e-mailed me to see if I would let him photograph my workspace for his ongoing series of that name. As I like both my workspace and Joe's work, I was happy to co-operate and now his picture (above) is about to be all that remains as a visual record of where I've sat for the last five years, often writing this blog!

I'm indulging in a reflective moment because today is my last day sitting here before I move the gallery two blocks south to a new street front space on West 24th Street. (I'm following Rahm's advice and going counter economic trend!) The collage of pinned up images, notes, etc., are the accumulation of that period of time - a combination of to-do's, invitations, and memorable cards and images. I guess it's what is generally called an "inspiration board" and I've always thought a book of different people's inspiration boards would be a worthwhile project to put together. (Any publishers who like the idea should feel free to contact me!)

It's been a swell five years at 521 West 26th Street, but I like change (and hope). So I'm looking forward to another five years at 534 West 24th Street and you can be sure I'll be keeping you posted on my own shows as well as the other stuff that grabs me. (Nevertheless, I was pleased to see that on The Photo Blog Triangle recently posted by Jorg Colberg I was halfway between "Comment" and "Curate" and far from "Promote".)

But mark this Friday, March 13th, in your books and if you're anywhere near please come by our opening of our Tanyth Berkeley show - which will open Danziger Projects' program on West 24th Street. 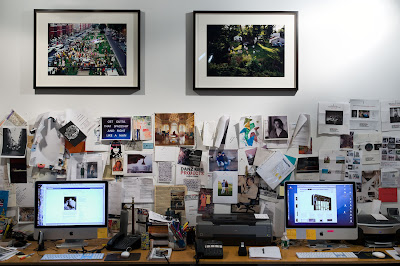 Posted by The Year in Pictures at 6:32 AM

I love seeing what other people pin to their desk area, the whole eclectic mix is often a peice of art in itself because it arrives in such an unconcious way.
Like you I am moving, but very much under duress and not anywhere like as glamorous a location!

Lovely! It makes a splendid wallpaper too, for my own three-monitors-PC. :-)

Love this post. I personally think the idea of a photo book of workspaces would be HOT. I love to look at all the different things that inspire people when in their work element. Your board is v. cool.

Congratulations on your move!

"Get outta that space ship and fight like a man"

I may get that tattooed on my arm.

Good luck on your move.

Back at home I have a rather large cork board filled with pictures, tickets, and a million other artifacts from high school. It's always a strange experience to go home and peruse it. There are layers upon layers of random pieces of paper and I wonder if I'll ever take it all down. Whenever I do, I imagine it will be like an archaeological dig.

what time is the opening friday??

And this is a wonderful video.
http://www.youtube.com/watch?v=HMrqBldlqzA&feature=channel

Because you have such excellent taste in videos.

I love the inspiration board book idea!

Congrats on your new space!

Inspiration boards are a view of their creators' souls and are always fascinating. I've seen entire walls devoted to them. A book would be wonderful.

Another area of great beauty is artisans' shops or workspaces. Sometimes I don't know what any of the things are, so it's like visiting an alchemist, and that's part of the attraction.

What is the brass and hardwood instrument to the right of your monitor?

The object you ask about is a desk light I've been meaning to get fixed for about ten years.

Perhaps this will inspire me to act!

unfortunately, during my last stay in NYC i didn't have time to drop by and visit your (old) gallery, hope to be back in the big apple and visit your new space! wish you all the best with the big change and keep up the good work
ula

Yes these are really interesting I just went to Holmes's website and he has many more interesting projects also thanks!
Oh and here's my blog love to here what you think?
http://www.thesinglelens.com/