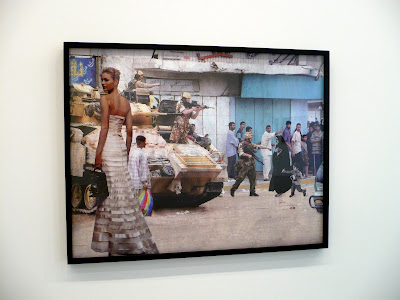 With the opening of the fall art season upon us, I figured I might as well show what's going on right here in the heart of New York gallery land instead of the usual Weekend Video.

And as you'll see, there's a decidedly mixed bunch of shows. So if I sound a little cranky, well - you be the judge of whether it's warranted or not.

My first stop - literally across the road - was Mitchell-Innes & Nash and a show of new work by Martha Rosler. Rosler has been an important figure in art since the 1960's, working in video, photography, installation, and photomontage. Her series "Bringing the War Home: House Beautiful" (1967-72), which combined scenes of war with images of domestic comfort and style is probably her best known work. Now, in the wake of the U.S. involvement in Iraq, Rosler has revisited the photomontage format, updating it to reflect the new technologies of war and today's consumer culture.

Dare I say it was a little obvious for my taste, but for those interested in the better giveaways - the large poster (below) is being handed out free. 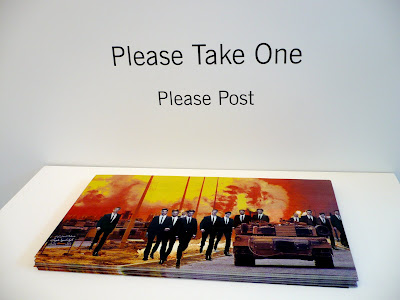 Whether by design or coincidence, Galerie Lelong which is next door to Mitchell-Innes & Nash, also has a photomontage show by a significant artist - in this case new work by Jane Hammond. Of particular interest are several large "snapshot" works in which Hammond has collected vernacular portraits and inserted herself into each one, presenting the viewer with a panoramic album containing an array of identities. Some of the other single collages also make for a interesting reconsideration of a genre not widely seen these days. 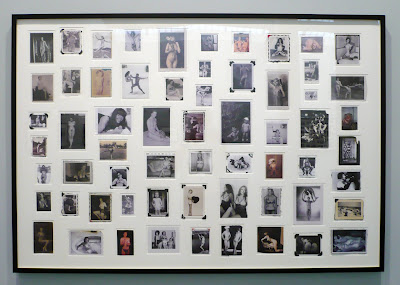 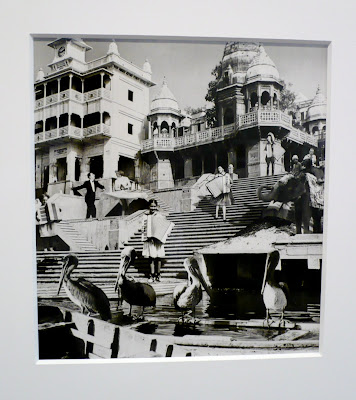 A block away, Bruce Silverstein presents his now annual offering where 10 well-known curators select 10 young photographers. The problem with organizing this kind of show is that you're stuck with whatever the curator chooses, and not unexpectedly the offerings are a very mixed bag, but the idea is a good one and if I had to pick my favorite it would be the Dutch photographer Rob Hornstra and his portraits from post-communist Russia.

Installation shot (below) followed by Hornstra: 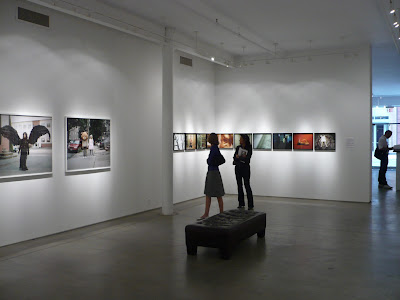 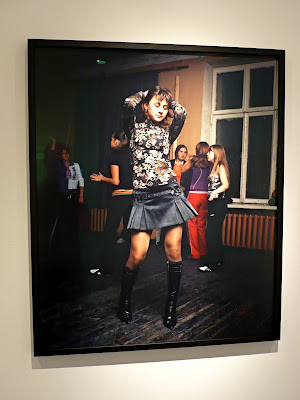 At Sikkema Jenkins & Co., the normally interesting Vik Muniz takes a real misstep with a show titled "Verso" which consists of painstakingly crafted 3-dimensional recreations of the backs of famous paintings and their frames, labels, etc.. Laid out on the floor on wooden blocks they look boring and give off nothing. But don't worry - it gets better ... and worse! 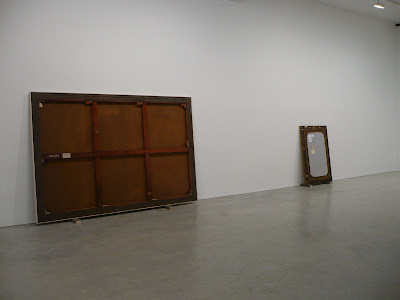 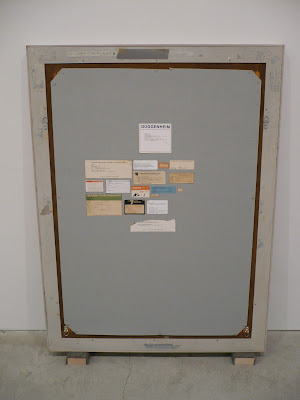 Case in point for better: a show at Carolina Nitsch Project Room of a collection of seminal Japanese postwar photography books. While it seems that everyone has been all over Japanese photography, the show is done with great care and even includes a video projection of every page of every one of the many books that make up the collection.

Installation shot followed by a close-up of a rare Sugimoto accordion fold book: 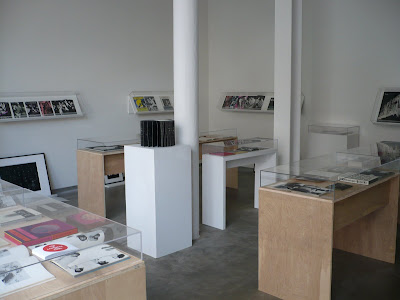 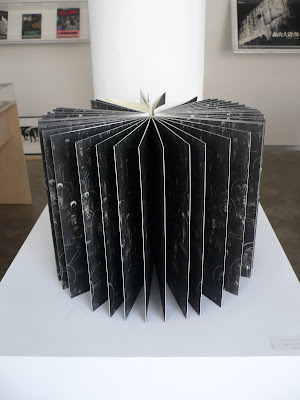 At Sonnabend, Jean-Baptiste Huynh fails to get away with a shameless rip-off of Richard Misrach's seminal sky pictures, the only difference being a slightly more square format, a larger edition, and double the price. The pictures are 40,000 euros - sacre bleu! 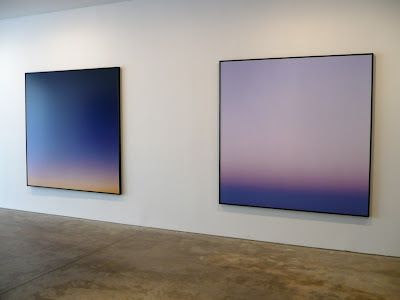 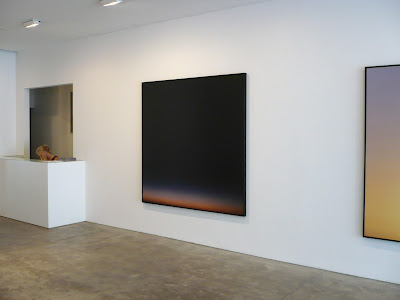 At 535 West 22nd Street, Julie Saul shows Jeff Whetstone's large scale photographs of caves in Tennessee and Alabama that were mined for the saltpeter that was used to produce gunpowder in the civil war. These caves have since become hideaways for both explorers and teenagers as well as a waiting canvas for anything from love notes to graffiti. So much of the point of the pictures is the relationship between early cave drawings and the markings left today. 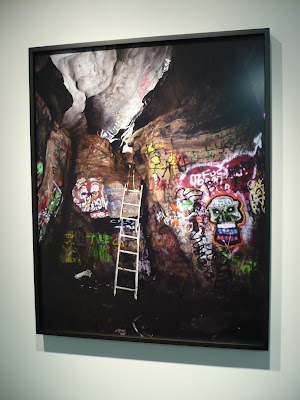 In the same building, an unusually restrained but typically elegant show of work by Masao Yamamoto - he of the pinned up distressed little silver prints. However, as you'll see, a few more works might have been in order here! 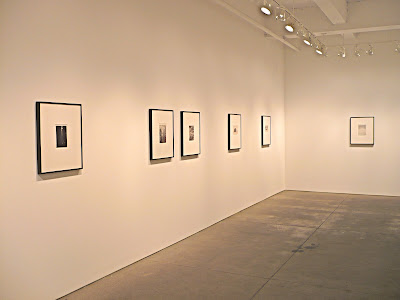 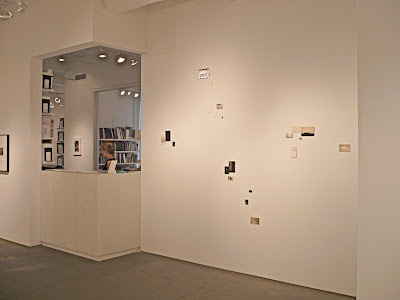 For some reason, meteorites are the thing this month. Jean-Baptiste Huynh has photographs of them at Sonnabend, and at D'Amelio Terras Gallery, Demetrius Oliver comes up with this boring combo. As the press release so helpfully explains:

Through large-scale photography, sculpture, slide-projection, and video, Observatory articulates a visual form for the cycles of thought, investigation, and experimentation endemic to artistic practice and self-discovery. Relying on materials encountered in daily routine and capturing their reflections off of curved surfaces, Oliver redeploys prosaic objects to unveil new contexts and sites of meaning ....

One day soon I promise to publish the best meaningless sentences from gallery press releases. 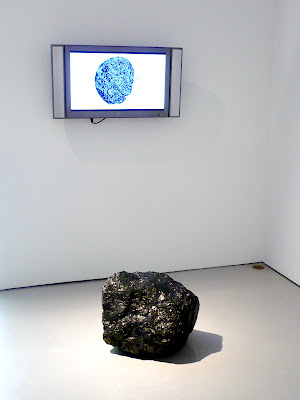 There's always a hip show of the moment and right now it's Roe Etheridge at Andrew Krepps. Etheridge is one of those photographers who works both the art and commerce side of photography and he seems to be quite influenced by the innovative color photographer of the 1930s, Paul Outerbridge. Again I could do without the conceptual layering with which the show is presented (something about Far Rockaway) but I particularly liked the photo of Etheridge's wife, Nancy.

And there's another good giveaway if you like poster size prints. (See bottom image.) 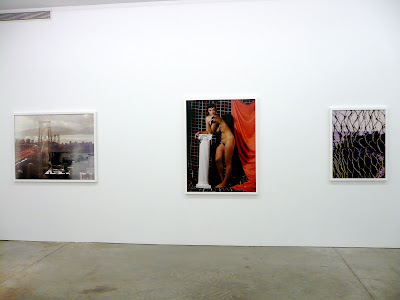 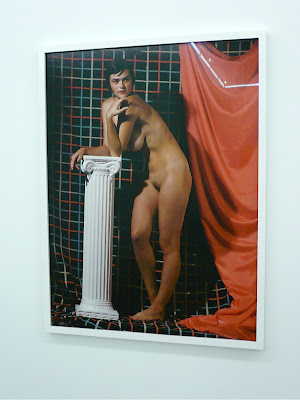 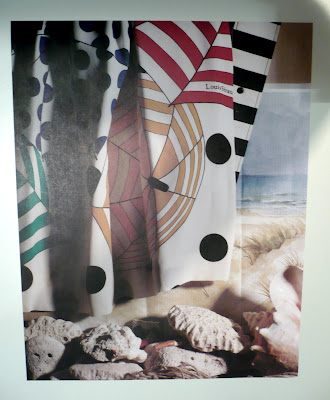 Alessandra Sanguinetti (at Yossi Milo) continues her series begun in 1999 following two young Argentinian cousins -Guillermina and Belinda. Having cultivated an intimate and collaborative relationship with the pair, Sanguinetti's images seem both fantastical and surreal as the girls transition from childhood to adulthood. 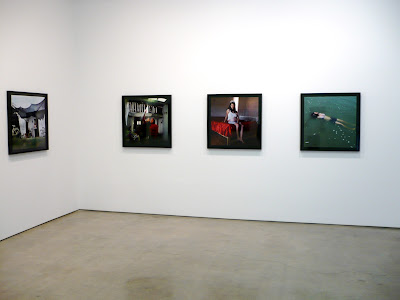 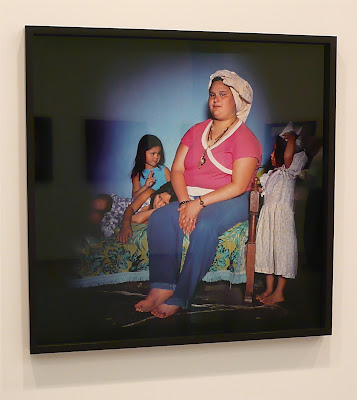 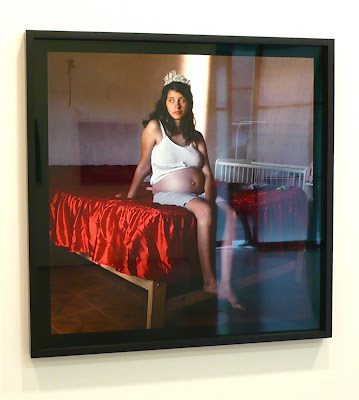 And the promised low point ... well, what can one really say about Andre Serrano's new show at Yvon Lambert (other than that it's a load of crap)? Or in this case different animal feces. Serrano who came to prominence as a result of his controversial image of a plastic crucifix submerged in urine (a surprisingly complex and interesting work) seems to have gone the route of the immature art school provocateur. And yet if my take on the contemporary art world is correct, he'll do O.K. with this show. Nevertheless, the thing I'd like to to see is the process by which a contemporary art collector comes in, selects, and purchases the work. That would help answer the pressing question - who buys this shit? 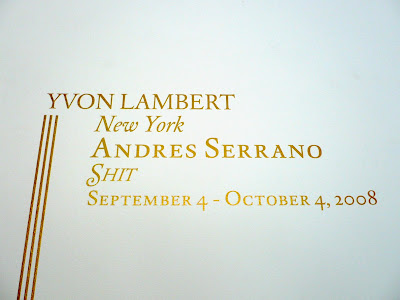 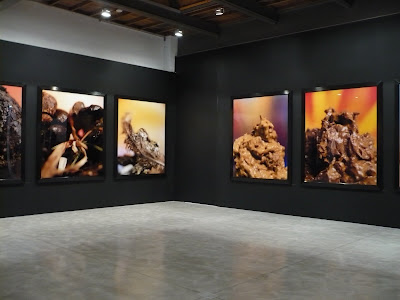 While Joel Sternfeld tries his best to deliberately avoid the picturesque in his photographs of a field in central Massachusetts, I was most drawn to the more picturesque of his un-picturesque pictures. Sternfeld was being televised as I walked into the gallery (Luhring Augustine) which I figured was as interesting as anything else going on and took a shot. 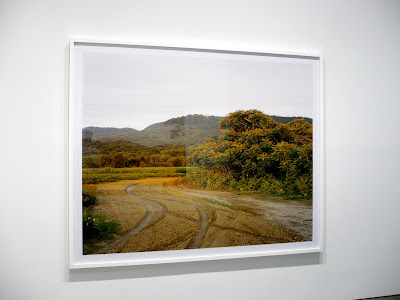 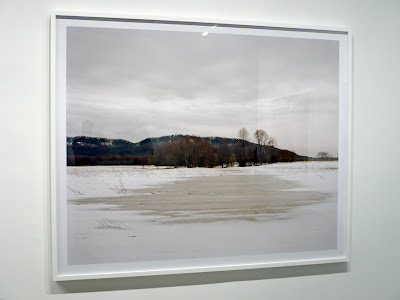 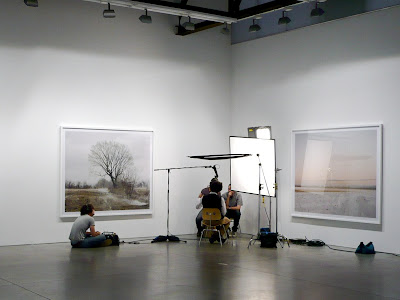 And finally ... phew! ... my last stop at Michael Mazzeo Gallery (formerly PEER) where they were still hanging the group show "How I Spent My Summer Vacation". What particularly caught my eye was the bottom picture by Cara Phillips - on one hand a head shot taken with ultra-violet light to reveal the damage sun can inflict to the skin, but on the other hand a visceral, luminous, interesting, original, and beautifully printed piece! And for those interested in the latest technology, it's apparently an example of the very latest digital black and white printing process. 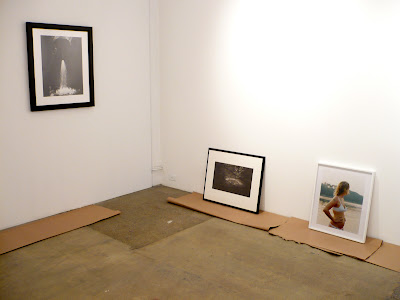 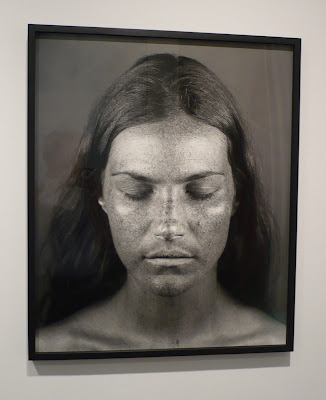 Posted by The Year in Pictures at 4:57 PM

very nice job on this Fall review... and saving the best photo for last...and we are going to hold you to your promise of posting the meaningless sentences from press releases....do it soon please!

Thank you SO MUCH for this roundup, for your insight and funny quips. Overall it didn't seem like you were very impressed with anything to start the fall. If so, I agree, nothing really memorable, demanding or, as a collector, a must have.

what new black and white process??

thanks for the review, i left nyc just before all these shows where open. i am glad i didnt miss much.

I enjoyed your reviews, thank you! That was a lot of footwork, although I've give anything to be in your shoes right now, in NYC at the start of the fall season. I'm blogging about art in DC (just started) and your posts are inspirational. :)