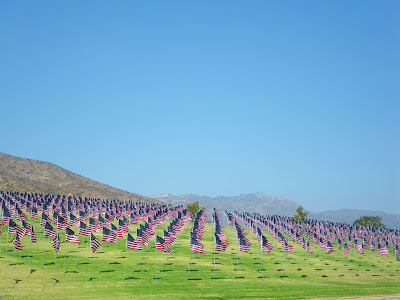 I‘m currently in Los Angeles and as I drove along the Pacific Coast Highway today, I happened upon this remarkable sight on the campus of Pepperdine University. A memorial comprised of 2,977 flags mounted on thin aluminum rods, the display stands for the number of lives lost during the Sept. 11 terrorist attacks. It was installed this past 9/11 and will only remain in place for one week. It has not been widely written about and surprisingly few people pull over to photograph it, walk amongst the flags, and reflect.

The project, called "The Wave of Flags" was conceived of by Ryan Sawtelle. the president of Pepperdine’s College Republicans and funded by a number of strongly right wing outside donors. This, naturally, became a reason for much debate on the campus but the "Wave" was ultimately supported by both the university administration and the undergraduate Young Democrats. So it is at once a memorial, an almost Christo-like art installation, and a tribute to freedom of expression.

Set against the deep green grass of the campus front lawn on one side and with the Pacific Ocean across from it on the other, it does what so little of public art does - be accessible and profound, beautiful and mysterious, and constantly changing. It is both joyful and surprisingly abstract and conceptual. And perhaps most importantly and paradoxically, all these qualities serve to depoliticize a symbol that has for too long been co-opted by one end of the political spectrum. 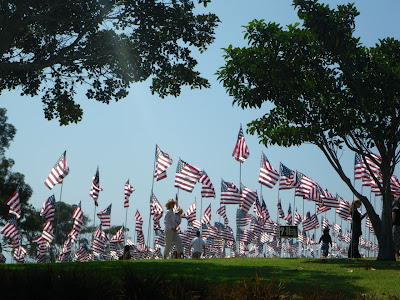 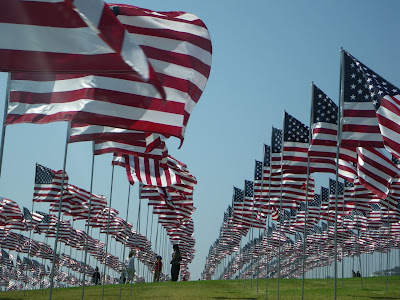 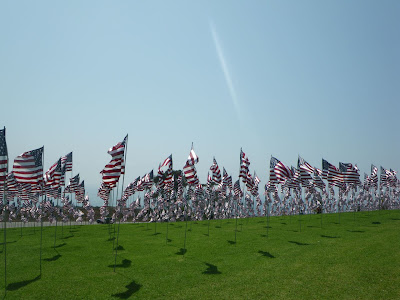 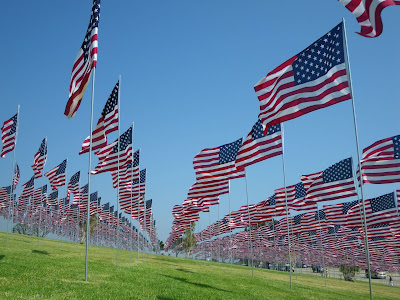 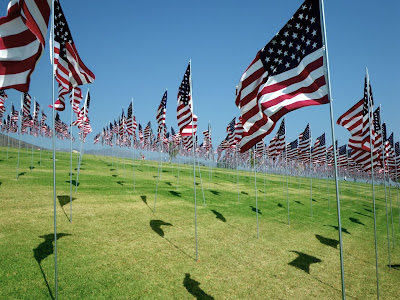 Posted by The Year in Pictures at 1:43 AM

That's beautiful, too bad it's been downplayed.

The Wave of Flags looks quite beautiful and engaging in your photographs.

Still . . . The project reduces the lives of those who died on September 11, 2001 to only one quality: their American-ness.

But not all who died were citizens. And all who died surely had a more complex relationship to their country than suggested by this installation.

Your point is well taken.

what an amazing sight!

I agree with Barry. To emphasize the American-ness of many people who worked in New York as foreign nationals is both to co-opt their deaths and to ignore what was great about America at that time, namely an openness to the world which is not present today.

I don't agree with Barry. We can't always ask so much from a memorial, that it remember the event AND recognize the individuals. My impression of the installation is that is intended not to memorialize each individual victim of 9/11, but to symbolize the attack on America. It was our country that was the target on that horrible day, not the individuals who tragically lost their lives--we were attacked and 2,977 innocent people died!--and the flags use the power of repetition and abstraction to make this point. The Oklahoma City Memorial uses 168 empty chairs, made of glass, bronze and stone, to represent those who lost their lives in the tragedy. I don't think anyone accuses that memorial of reducing the victims to an object or a shared personal trait. A memorial can't be all things (particularly one that is designed to last just one week): There will certainly be other memorials for the 9/11 victims, some of which may celebrate their many individual qualities and tell their individual stories, including perhaps their nation of origin, occupations and other details, but just not this one. Instead, it focuses on the one thing that they do share--not their American-ness, but the fact that they all died the day America was attacked.

I'm so rarely on PCH, I had no idea about this. ...which is strange considering a work with a woman whose husband works at Pepperdine. Thanks! Fantastic photos as well.

Maybe I am going to outrage some of you, but I do hate nationalism. I can't understand how everything is reduced to simplistic concepts in the name of some patriotic affiliation. Those who died are victims, not heroes, and killed by lunatics who may have intended to attack your country but did only kill individuals from some 30 different nationalities. A victim is a victim, regardless of his nationality. And I find these commemorations a bit unfair. The US have attcked and caused victims all over the world. An Argentinian friend who lives in NY was shocked to see relatives of dissapeared people exhibiting photos of their loved ones on the streets post 9/11. The same sight he encountered in Buenos Aires after the coup, engineered in Washington and perpretated by US trained killers. Coming back to this day Why not putting up some 600.000 Iraqui flags in a hill at the heart of the US?
As much as I adore the US, I can't stand some of his jingoistic practices. All men are born free and equal, remember?
Even so, I find the installation alluring, possibly for all the wrong reasons. That's the power of symbols.

I visited Monday (so glad I saw this post) ... it was amazing to be there - totally regardless of politics.

Thank you for sharing this. You captured it in its brevity. And because of that, it will live on. As it should.