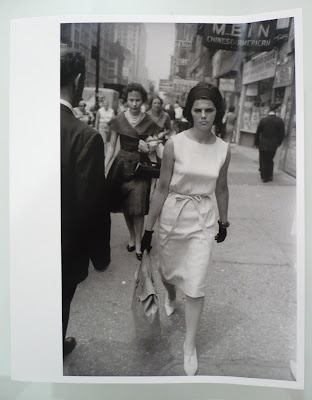 One of the most interesting shows of the forthcoming season looks to be “Garry Winogrand – The Sixties” at the Fraenkel Gallery in San Francisco. The invitation, like all their invitations, is compelling and original, and beautifully done, so I have reproduced all four pages - above and below. 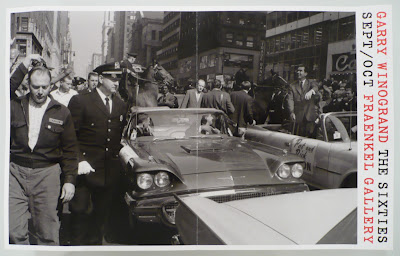 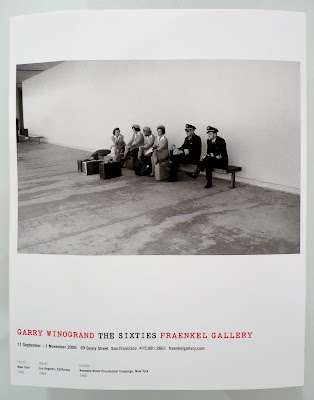 I also came across this uncredited biography of Winogrand on the Temple University website. I thought it was worth copying whole, but if you have to skim, don’t miss out on John Szarkowki’s final quote. As always, he said it better than anyone.

Garry Winogrand's too short career defined street photography for future generations of photographers. He made photos of New York City and it's inhabitants. He traveled the country is search of America. He captured the banalities, the excitement and the complex social realities of a modern city. Winogrand shot incessantly, at the time of his death he had over 2500 rolls of undeveloped film, over 6500 rolls of film that had not been contact printed and 300 contact sheets that showed no signs of being edited. This was a total of over 300,000 photographs that he had taken but not bothered to look at.

His subjects were drawn from life around him and frozen in time by his distinctive style of using a wide angle lens, a close approach to his subject and tilting the frame. He didn't like to use a long lens to isolate his subject against a background; rather he made the background part of the image to give the subject context. His photographs caught the critical moment when unrelated activities coincided against a background. Many of photographs imply, but don't show action. They exist before an event, anticipating the event about to occur.

Winogrand was born in 1928 in a predominantly working class Jewish neighborhood in the Bronx borough of New York City. Winogrand developed his habit of wandering city streets early on in his life because of his family’s crowded apartment. He would keep this habit all through his life.

He spent two years, 1946-47, as a US Army weather forecaster stationed in Georgia. He returned to New York City after his discharge and decided to become an artist. He enrolled in a painting course at Columbia University. His classmate George Zimbel introduced Winogrand to, as he put it, “the magic of photography.” Winogrand was hooked as he watched one of Zimbel’s prints magically appear in the developer tray. He immediately dropped the painting class to pursue photography. Winogrand was usually broke so he continued to “borrow” the darkroom at Columbia as long as he could. He went on to “borrow” paper and chemicals from his friends in order to keep working.

He received a scholarship to study with Alexey Brodovitch at the New School for Social Research. Brodovitch, an influential editor at Harper’s Bazaar, taught many of the great photographers to emerge from New York City in the 40’s and 50’s. Brodovitch enjoined his students to reject the old clichés of photography. He told them, if they recognized the picture they saw through the viewfinder, do not press the shutter. Winogrand learned this lesson well and based his whole life on searching for new ways to photograph his subjects.

Winogrand eventually got a job as a stringer for the Pix agency. He gained access to a darkroom and an office where he could talk with other photographers. One of the other photographers, Ed Feingersh introduced Winogrand to the agent Henrietta Brackman, probably because he was tired of Winogrand “borrowing” materials all the time. She got Winogrand commissions shooting various general interest stories for Colliers and Argosy. The work he did for the magazines was typically generic. Winogrand was later dismissive of his photojournalistic work because it was so generic and didn’t have the stamp of his individual style. Some of his work during this period did stand out including his photos of the beach at Coney Island and the 1955 feature on the ‘El Morocco’ nightclub.

Winogrand decided to take a trip across America in 1955. He was introduced to Walker Evan’s book, ‘American Photographs’ by his friend Dan Weiner. It had such a profound effect on Winogrand that his trip was far less photographically successful than Robert Frank’s trip the same year. According to the article by Peter Marshall, “he produced few pictures (because he was) – probably overawed by the work of Evans.” Frank’s’ trip would result, a few years later, in his book The Americans. This book would also be another strong influence on Winogrand.

The Cuban missile crisis in 1962 was an important turning point in Winogrand’s life. He was caught up, like many others at the time, in feelings of desperation that nuclear war could bring about the end of civilization. In typical fashion he took to the streets to walk off his worries. He came to the realization that, according to Szarkowski that “he was nothing … powerless, insignificant, helpless … and so was free to lead his own life.” This powerful liberation allowed him to escape from his political affiliations and the strict ethical structures of his Jewish family life. From then on he dropped all his political activities and began the process of divorcing his first wife. Marriage was never a success for Winogrand because he was too self-centered to make it work. After his divorce he single-mindedly devoted himself to pushing the boundaries of photography.

During the 60s magazine work dried up and he turned to advertising photography to support himself. His work in this field was competent but not outstanding because he refused to take the work seriously. He married a second time to a copywriter at one of the agencies he worked for but it was short-lived.

Winogrand had his first gallery show in New York in 1959. He took part in two prestigious shows in the 60s at the Museum of Modern Art (MoMA) in New York. The first was Five Unrelated Photographers with Ken Heyman, George Krause, Jerome Lieblin and Minor White in 1963. In 1967 he participated in the New Documents show that featured him with Diane Arbus and Lee Friedlander. Winogrand didn’t make a big impression until the 1967 show curated by John Szarkowski, who later became an editor and reviewer of his work. The books The Animals (1969) and Public Relations (1977) would later confirm his as a master photographer.

The public recognition gained from the shows lead to invitations to lecture and lead workshops along with increased print sales. He received a second Guggenheim grant to take pictures showing events arranged for the media. This work was later shown and published as Public Relations. This book was considered his most polished work because of the editing work of photographer Tod Papageorge.

In 1972 he married for a third time and took his first permanent teaching post the following year at the University of Texas at Austin. He stayed in Texas for five years but produced very little work because of teaching and preparing his two books Women are Beautiful and Public Relations. He was commissioned to photograph the Fort Worth Dallas Fat Stock Show and later produced the book Stock Photographs from those pictures. Almost all of his work from this period was a series of airport photographs made while traveling.

Winogrand had a very bad year in 1975, both personally and professionally. His book, Women are Beautiful, was badly received by critics and the public. John Szarkowski discusses the pain of public indifference in his book Winogrand, Figments of the Real World: "A collection of Winogrand's pictures of women in public places, mostly made during the decade of he sixties, was published in 1975 as ‘Women Are Beautiful.’ Winogrand's own appreciation of women was enthusiastic and undemanding, and he naively assumed that the rest of the world, at least the rest of the male world, would be eager to buy a book of photographs of anonymous, fully-dressed women walking down the street. His expectations of commercial success were disappointed."

When he quit smoking because of a thyroid condition that required urgent surgery he gained 50 pounds. He was out of the hospital only a few months when he was injured in an accident at a football game. He ended up under a pile of players on the sideline with a broken leg and a smashed knee. His recuperation was slow and it was some months before he was back to work.

In 1978 he moved to California when he received his third Guggenheim grant to photograph that state. He continued his California project although it was interrupted by various trips abroad but he seemed to lose interest in seeing the results of his work. In February of 1984 Winogrand rushed to see a doctor because of abdominal pain. He died six weeks later from inoperable gall bladder cancer.

According to John Szarkowski, Director of the Department of Photography at the Museum of Modern Art since 1962 and a longtime friend and supporter of Winogrand, "The technical decline of the last work was perhaps accelerated by Winogrand's acquisition, in 1982, of a motor-driven film advance for his Leicas, which enabled him to make more exposures with less thought. On the same day he acquired an eight-by-ten-inch view camera, an instrument that proposes a diametrically different approach to photography. The new camera was perhaps an acknowledgment that his old line of thought was nearing the breaking point. He did not use the eight-by-ten, but he talked about using it..."

Szarkowski's final words won't be applied to many, however.

"When we consider the heedless daring of his successes and his failures we become impatient with tidy answers to easy questions, and with the neat competence of much of what now passes for ambitious photography. Winogrand has given us a body of work that provides a new clue to what photography might become, a body of work that remains dense, troubling, unfinished, and profoundly challenging. The significance of that work will be thought by some to reside in matters of style or technique or philosophical posture. There is no original harm in this misunderstanding, and useful work may come of it, but it will have little to do with the work of Garry Winogrand, whose ambition was not to make good pictures, but through photography to know life."

Posted by The Year in Pictures at 5:09 PM

"...through photography to know life."

Years ago - it must have been in the late 1980s - MOMA organized a Winogrand show. Although I remember nothing about individual images, I do remember walking into one small room that was covered, floor to ceiling, with contact sheets and his markings on those sheets.

The density of the images, and the artist's engagement with them, created for me a new understanding of what photography was about. It was immediately apparent that I was no longer in Ansel Adams territory.