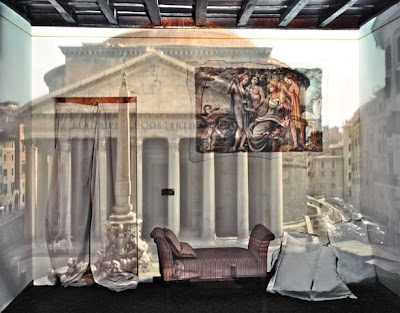 cam.era ob.scu.ra - a darkened enclosure in which images of outside objects are projected by their own natural light through a small opening and focused onto a facing surface.

Two years ago, I had the pleasure of mounting the first New York show devoted exclusively to Abelardo Morell’s Camera Obscura photographs. At that time Morell – who until then had only worked in black and white - was just beginning to experiment with color. Now he has completed his first full body of color work and the show opens at the Bonni Benrubi Gallery on Thursday. They were kind enough to send these images so that The Year in Pictures could provide an exclusive first look at this new work.

To date, Abelardo Morell has been making camera obscura pictures for 17 years, over which time he has been quietly building one of the great ongoing photography projects. At once pictorial and conceptual, these pictures address issues of science, art, topography, landscape, architecture and now color.

The initial idea for the work came out of Morell's demonstrations to his photography students at the Massachusetts College of Art in the mid-1980s where he turned his classroom into a Camera Obscura. The exercise was designed not only to elicit a sense of awe and wonder, but also to connect students to the precursive roots of the medium. It was not until 1991, however, that Morell decided to document the process on film, and he began by taking pictures in his own house in Brookline, Massachusetts. In order to capture the elusive projections, the exposures had to be about eight hours long, but the initial results charged Morell with possibilities. The play between the inside and outside world, the tension between the right way up and upside down, the surreal contrast of buildings and beds, trees and walls, formed a miraculous and original vision of a magical but still real world. 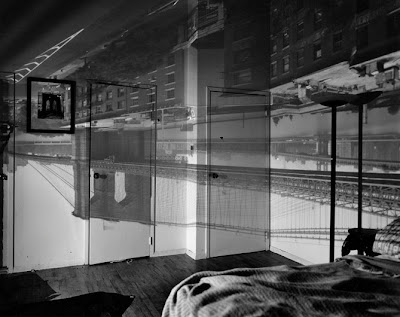 An earlier black and white of the Brooklyn Bridge

Over the ensuing years, while continuing to make photographs of a number of different subjects, from still lives of books to the backstage of the Metropolitan Opera, Morell has continued the Camera Obscura series venturing further and further afield to different cities and states and then to England, France, Italy, and Cuba. He has photographed in simple cottages and in some of the world's great museums, in the homes of the rich and in public libraries.

In this new series in addition to the advent of color, Morell has inverted the inversion, finding a way to flip the reflected light so that in these pictures the projected view of the outside world is now oriented correctly. Additionally, as is often his practice, Morell includes the beginnings of a new series playing with the relationship and contrast of painting and sculpture. For a fan of “Alice in Wonderland” which I know Morell is, the pictures just get curioser and curioser! 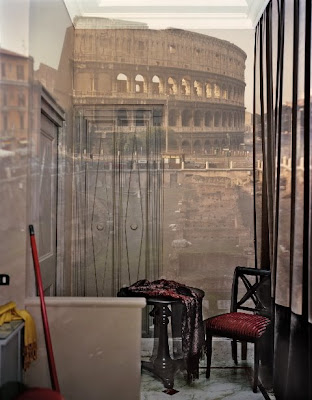 Upright Camera Obscura Image of the Coliseum in the Hotel Gladitori, Rome, Italy 2008 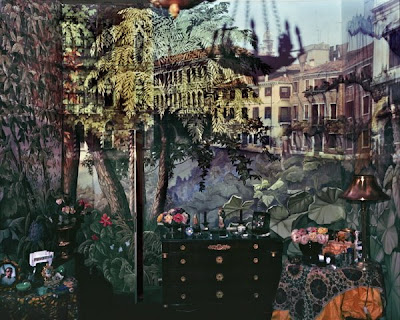 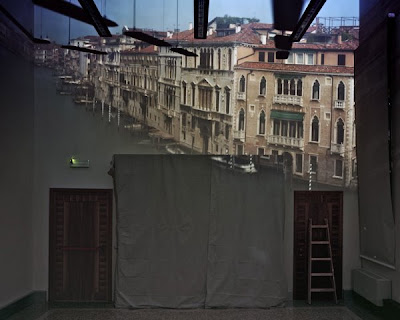 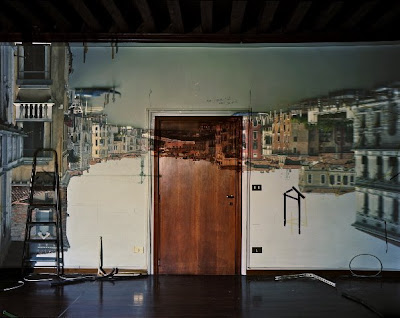 Camera Obscura Image of the Grand Canal Looking West Toward the Accademia Bridge in room under construction, Venice, Italy, 2007 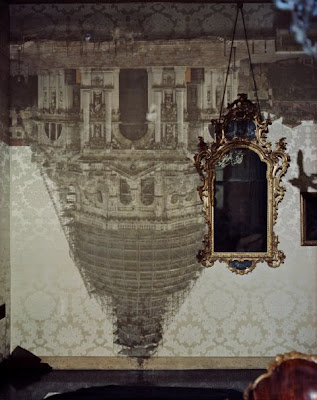 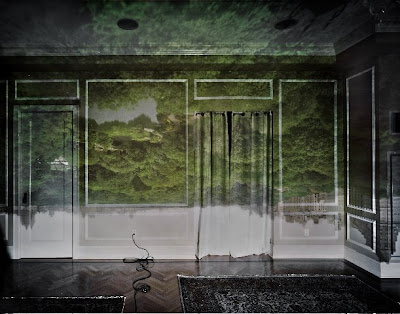 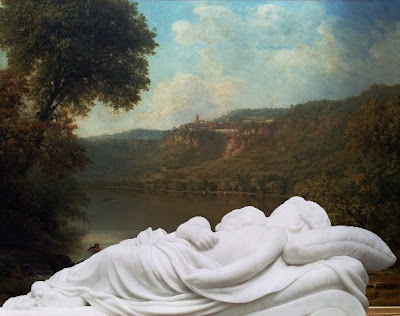 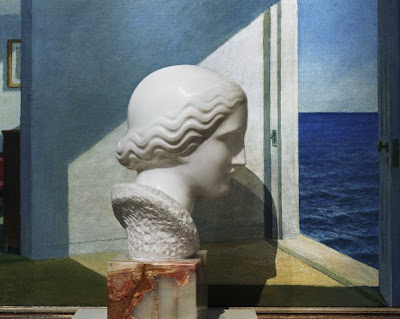 What an absolutely eye-opening experience...literally....reading your bog has become for me. Thank you beyond how straight forward that seems. You are so first rate.

I have become a bit anxious realizing that we are fast approaching the end of the year. I hesitate to ask...with that same held breath... on knowing your favorite novel could end without a part two...but I will stalwartly look for a The Year in Pictures 2009.
Linda

Stunning! I can't wait to see the show. Do you know how he inverts the light?

To answer both questions above:

Linda - Actually my year in pictures ends November 10, but as of now, no plans not to continue.

Miguel - The inversion of the image is a result of the optical phenomenon where if you create a pinhole of light from outside into a darkened room, whatever is outside will be projected inside upside down. Morell's new trick is to invert the inversion.

I have some very dog eared pages from a magazine I saved years ago of his work. He was such an inspiration that I too, have created a camera Obscura in a small classroom to show students. Many refuse to believe it is not some magical trick, especially when they see cars moving!
I am so pleased Morell has continued to devlop this project into something really special. The colours from the Venice images are particularly lovely.
If you are ever in Greenwich, there is a fantastic permanant Camera Obscura next to the Observatory.

linda --- no worries. he said "no plans not to continue" which not so clearly translates to "plans to continue". mais oui?

I love the obscured images ....very moody and romantic. Oh, they're just great!

ooh, {i was just reading the comments} and speaking of "the inversion of the image is a result of the optical phenomenon" ...isn't that the shroud theory as well?

I had to comment again {a day later} because, I just love these!

i haven't read the blog all week- but finally, the man i've been waiting for. no book photographs though?? the only "coffee" table book, that i devour over and over. morell is simply a brilliant photographer! thanks!