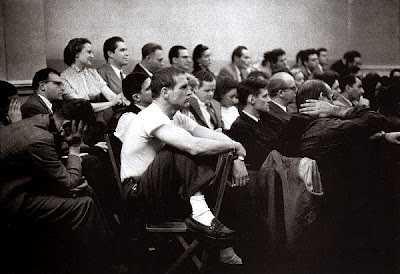 Paul Newman was a unique celebrity in that the notion of celebrity seemed so removed from him. He loved acting but more for the craft than the rewards. His loved race cars, good food and wine, liberal causes, and according to one newspaper he gave more to charity in comparison to his own wealth than anyone has ever done.

Photographically speaking, he was never one for posing and so there are few iconic pictures of him outside of movie stills, with the exception of this one great photograph by Eve Arnold.

Photographed in 1955 at an Actor's Studio class, it was taken the year before Newman was to make a mark in “Somebody Up There Likes Me” and three years before his first Academy Award Nomination for “Cat on a Hot Tin Roof”. When I asked Arnold how she happened to focus on him while doing a story on the famous acting school she had a simple answer, “He just glowed.”

The tributes to Newman are many and profound, but perhaps my favorite line about Newman came from Adam Sandler in his “Chanukah Song”:

Paul Newman's half-Jewish, Goldie Hawn too.
Put them together, what a fine-lookin' Jew!

This is by far the best picture of Paul Newman I've seen this week. He has (had I guess I should say)an intensity and a charisma rarelly seen, and more so because he's not playing with it.

I thought I had found a great picture for my post, but this one is wonderful. And what a great tribute.

A very nice post and a great picture. He would love it!

A great photo of one person, among several others in a group, who appear to be actually LISTENING. How many people can listen these days??

it's hard not to admire Paul Newman for putting his money to work in such productive ways, such as his Newman's Own line--high quality stuff and the proceeds go to good causes... very smart.