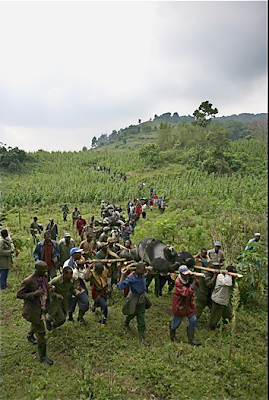 Congratulations to photographer Brent Stirton of Getty Images. On Friday, Stirton won the 2008 Visa d'Or Award for feature photography at the prestigious yearly Festival pour L’Image in Perpignan, France, for his acclaimed project on the slaughter of gorillas in the Democratic Republic of Congo.

Coming on the heels of Stirton’s being revealed as the photographer who took the Brangelina twins pictures that raised close to $20 milion for the Jolie-Pitt Foundation – it’s been quite a year. (In response to questions about the difference between the two shoots, Stirton had a smart response. “Photojournalism is education for change, Jolie-Pitt is about finance for change. Once you’ve seen the hospitals and clinics that money has built there’s no problem.”)

A brief history of the Virunga gorilla pictures: Last July, Stirton photographed the bodies of seven endangered mountain gorillas who had been murdered, execution-style, in the Virunga National Park. After discovering the bodies, many of which had been hacked and burned, park rangers and villagers covered the mutilated parts of the bodies with leaves and carried them on biers out of the jungle.

Virunga National Park is in the same region where researcher Diane Fossey studied the gorillas — and battled poachers four decades ago, before being killed herself. But the 2007 killings bore none of the hallmarks of poachers, who usually take the adult animals' heads and hands as trophies, and carry off the gorillas' young for sale on the black market. These victims were simply slaughtered — most likely as a warning message that Stirton has come to believe is part of an ongoing struggle over illegal charcoal production in the park's ancient hardwood forests — a struggle that involves corrupt wildlife park officials, Congolese army factions and the Hutu militia. A leading wildlife official is currently charged with the crime but has yet to be
found guilty.

The story is on one hand a microcosm of the war in the Congo and the aftermath of the Rwandan genocide. But it is also a story of horrendous cruelty and inhumanity and of a moving human response.

In a recent NPR interview, Stirton described how the procession taking the gorillas' bodies from Virunga was unlike anything he'd seen in more than a decade of covering some of the planet's worst atrocities.

"I've never seen that degree of stoicism, or sobriety, or somberness," Stirton says. "There was no talking. ... For many moments at a time the only thing you could hear was the sound of people walking. ... I've never seen that before, even when people were collecting the bodies of humans, when I've seen massacre sites."

Is anyone else reminded of the scenes of Aslan's death from "The Lion, The Witch, and the Wardrobe" (or other pictorial analogies) in these desperately sad pictures?

Meanwhile, mountain gorillas are among the world's most endangered species; only an estimated 720 of the primates remain alive today. 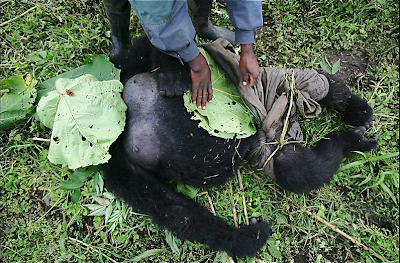 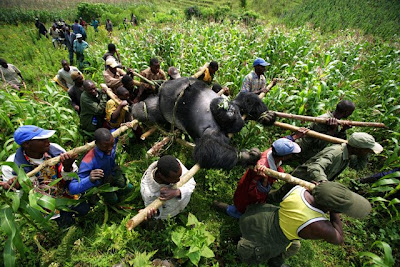 Posted by The Year in Pictures at 5:59 AM

Thanks for the pictures and comments. Very much look forward to your postings.
Perhaps we are inured about the slaughter of people and if there was a finite number left we would be more reverent.

it's so sad. The photos are amazing but the story is just ...well, sad.

these photos are amazing and sad and very deserving of the prize.

Check out Stirton's interview on how these pictures came to be. Amazing!

thanks again for posting pieces that make me want to continue taking photographs.