Pictures from a Train 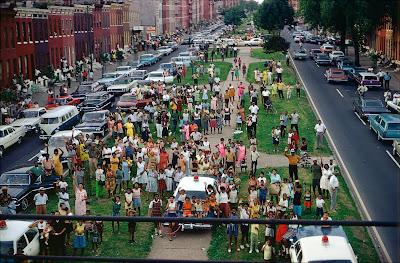 I have been holding off on writing about the upcoming exhibition at my gallery - Paul Fusco’s RFK Funeral Train: Rediscovered – as the New York Times Magazine had an exclusive. But this Sunday they ran six pages on the work together with an excellent audio-visual piece on their website, so now I’m free to blog.

To put it simply and truly, these pictures are my favorite body of work in photography. They were taken on June 8, 1968, from inside the funeral train that carried Robert Kennedy’s body from New York to Washington so that he could be buried beside his brother at Arlington. The photo-
grapher Paul Fusco had been assigned the story by LOOK Magazine and on what turned out to be an unusually hot Saturday, close to a million people – black and white, rich and poor, young and old, singly and in groups - spontaneously came out to pay their respects to the man who had inspired so many Americans.

I first came across the pictures when I was Director of Magnum Photos in New York (Paul Fusco is a Magnum photographer) and was overwhelmed by their emotion, by the very American-ness of the pictures, the skill with which they were captured, the modernity of the color aesthetic, and the surprisingly uplifting response to such a tragic event. Fusco took over 2,000 pictures in the eight hours it took to make the usually four-hour journey and from this group I had the daunting but privileged task of selecting 20 images that we ultimately printed as a set of 27 inch wide cibachrome prints.

To compound the challenge and the pleasure, over the period of a year and a half that Paul and I worked on the project, we kept discovering new troves of the pictures including close to a thousand lost transparencies located by Lesley Martin of Aperture that had been sent to the Library of Congress when LOOK Magazine folded in 1971. (Aperture will be publishing a new book of the work in September.)

I’ll let the pictures speak for themselves, but I’ll also tell you the only area where Paul and I disagreed. For Paul, the event and the photographs represented the end of hope. To me they represent the indomitability of the American spirit.

One final note – the opening of this exhibition is Wednesday, June 11 from 6 to 8 p.m.. I would love to welcome all readers of this blog who can make it to attend the artist's reception of this extraordinary show. 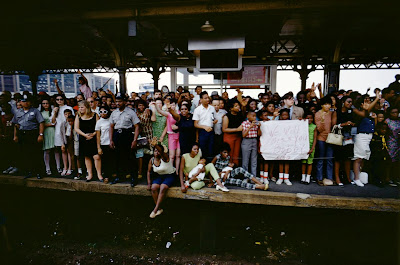 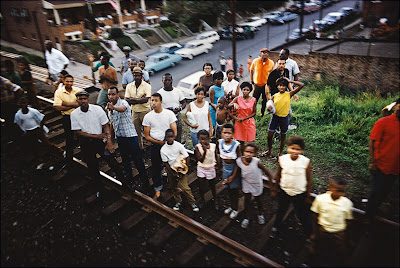 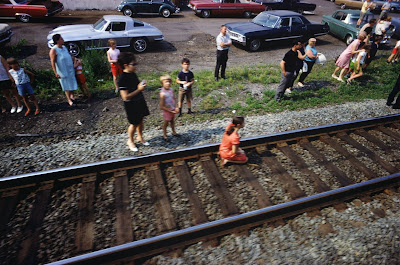 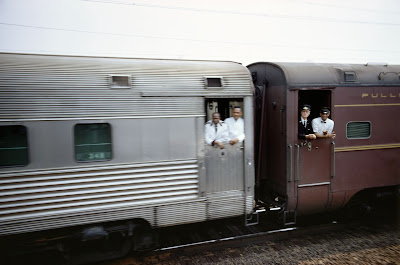 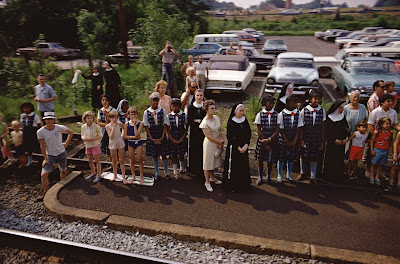 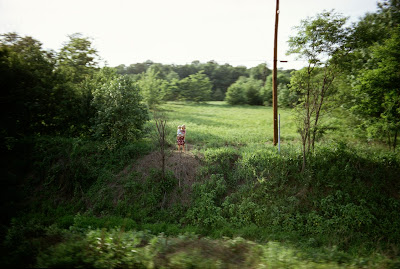 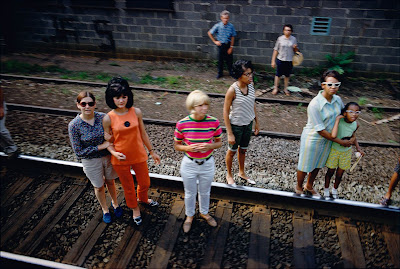 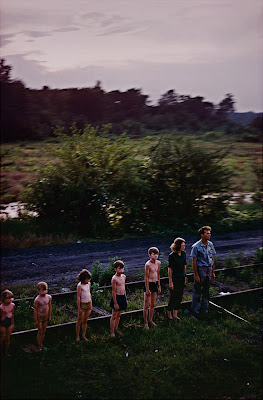 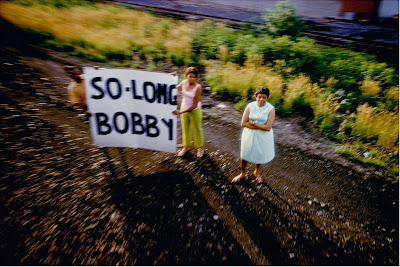 Oh, wow. These are amazing. The picture of the woman standing in the field holding the child moved me immensely. Thank you for sharing these with us. If these are the few you chose out of thousands, I can well imagine there just as many more that are as moving.

Those are really amazing and moving!

I wonder how many pictures exist in family albums that include Fusco, photographing (back) from the train.

These images also convey the profound connection that can emerge between an individual and a larger public. At least in RFK's case, the connection went beyond personality and character and into the deeper realms of aspiration.

Perhaps some of the power in these images derives from the aspirations that were shattered by the assassination. Those standing by the tracks were mourning Bobby Kennedy, the public figure. But almost certainly these ordinary people were also mourning the hopes and aspirations symbolized by RFK and which were cut short by madness.

These images make the tragedy fresh again. Thank you for publishing them.

hopefully Obama will never take such a train ...
I wish you all the the best for the new president's election.
August, from France.

These are profoundly beautiful. The motion blur gives them a very transient feeling. All of these people gathered there for a fleeting moment of a passing train.

this looks amazing, thank you.

Just wanted to let you know that I was so moved by the images and the show, that I wrote a blog promoting the works and the opening... Thanks again

You wrote: "...overwhelmed by their emotion... by the very American-ness of the pictures..." From a foreign eye I think those words described them perfectly.
The family standing in line, saluting like soldiers and the mother with her child sorrounded by green, all by herself are just amazing.
Always a pleasure to visit your blog.
www.claudiopared.blogspot.com

I love your blog and these photos brought me to tears....how far we've come...I hope...a picture is truly worth a thousand words.

The photos are, indeed, a moving and poignant documentation of a syndrome I've never fully understood. I personally have little to no use for celebrity worship, and much of the RFK funeral train mystique seems as wrapped in that as it did with any political significance. It's somewhat safe to say that RFK had the adoration he had at the point of his assassination because he had yet to have the opportunity to either fail to enact the changes he may have desired (see Clinton and universal health care) or truly muck things up with regards to fiscal policy, the Vietnam War, etc. I'm certain that no funeral train of someone who had actually been president (I think the last was Eisenhower's of 1969) would be greeted this way today; it might actually bring as many protestors as mourners. And that's tragic, if you think about it.

Wow these pics gave me a chill. Is this when we were more than a nation of consumers?

This work is what it is all about. What an amazing body of work. So incredible moving, what a record.
Thank you so much for showing it and introducing it to new viewers.

It is always weird to find a picture of another photographer that is taken is the same moment. We, as a viewer, know that probably there is more than one photographer following the same news, but we always assume the photographer is alone. On Vanity Fair (June 2008) in the article about RFK there is a picture shot by the train of Bill Eppridge ( http://www.vanityfair.com/politics/features/2008/06/rfk_excerpt200806?currentPage=7 ) that was shot from almost the same angle and at the nearly exact moment than the first one of this post shot by P. Fusco!

These made me shed new tears. Thank you for posting them.

I watched the RFK train going through Jersey. The tracks went right by my brother's Little League field, and they stopped the games as the train passed. Even as a rather sheltered first-grader, I could understand the trauma of those days. I though I saw Ethal.

I first came across these images a few years ago in Brighton, UK, and I consider them one of the most moving bodies of work in photography. Thanks for putting them on the (excellent) blog. I've linked to this page from my website, hope that's ok –
http://www.dayfour.info/index.html