Not Alexander Rodchenko (but almost) 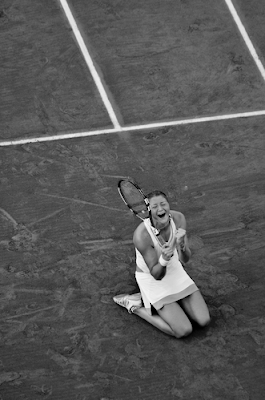 How fitting that such a constructivist photograph be taken at the French Open after two of the best Russian players – Dinara Safina and Maria Sharapova – had battled it out in the fourth round. Safina (pictured above) won in three sets.

The photograph by Pierre Verdy is one of the best of its kind with its aerial perspective, strong diagonals, and wonderful strokes of footmarks breaking up the clay, not to mention Sarafina’s expression - a mix of exultation and relief.

Again, it’s a picture that appeared in black and white in The New York Sun newspaper and in color on their website, but I think it’s a no-brainer this time that the black and white version wins game, set, and match. 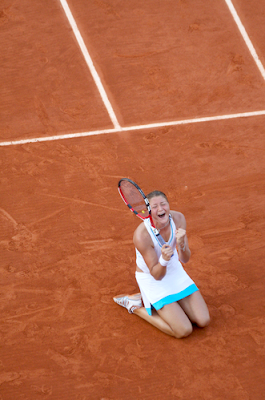 Posted by The Year in Pictures at 9:18 AM

what a brilliant shot. yes, black and white wins.

i guess, she's marat safin's sister, right? then, the winning gene is in the family. the BW wins, the playground looks like a true battlefield