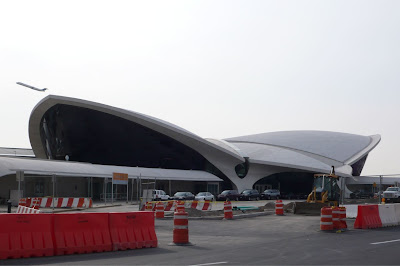 When someone tells me I'm not allowed to take a picture, I take it as an affront and a challenge. I haven't looked into the actual legality of the situation yet, but I'm pretty sure there's nothing wrong with photo-
graphing the former TWA Terminal at JFK (above), as I tried to do before I was stopped by security, or in the various stores, museums, and establishments who routinely tell you, "Photography is not allowed". With the advent of tiny digital and cell phone cameras it's pretty hard to enforce anyway, but here are some samples of my recent surreptitious iPhone camera work. 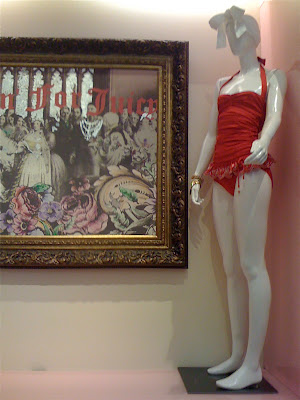 This from Juicy Couture in Beverly Hills, after they would not sell my daughter the bathing suit on the display dummy. (We wanted a visual reference.) 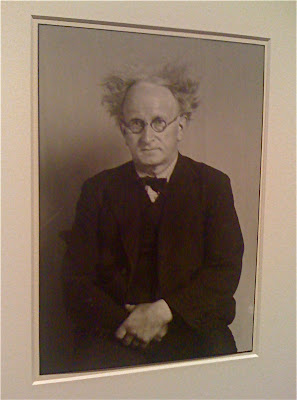 This from the revelatory August Sander show at The Getty (photography not allowed), about which I'll write more later. The title for this picture is "The Photographer after a Nap" so it's an unusual self-portrait! 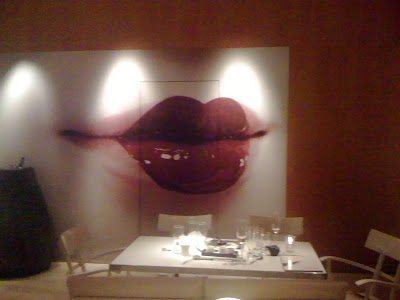 This from Katsuya - a new-ish Philippe Starck designed restaurant in Brentwood. The tricky thing here was that Robert Downey Jr. was sitting at a table just to the left of the frame so I was trying to get the graphic on the wall while respecting his privacy as a diner. However, I'm sure he thought I was pretending to photograph the wall while really trying to snap him!

Posted by The Year in Pictures at 2:56 AM

I've been stopped a few times. Once by the FBI.

Was photography allowed at the recent Richard Prince show?

fabulous photos...I love your writing too.

The lips are so juicy!

I had a similar problem in Sacre Coeur in Paris; armed guards (practically) came after me when I tried to photograph the ceiling. So I sauntered into the nave, hid behind one of the huge pillars close to the altar and snapped a coupla very nice shots. There's ALWAYS a way, esp. with a little camera!

I've been told a few times (usually by uniformed security guards) that "Pictures aren't allowed here." My response is usually something along the lines of "Photography is not a crime," or, if they persist, "Call the police if you think I'm breaking the law." Thus far, there have been no physical confrontations, and I've been able to take most every picture I've wanted to take, but it is something I worry about in certain venues, and especially in these paranoid post-9/11 times.

Photography is not typically allowed in most museums, art galleries, or places that hold historic relics; due to the fact the intensity of the flash can deteriorate the pieces and create larger restoration issues in the future. This stemming from the same logic that you are not allowed to touch pieces of art because the oils from your hands can also deteriorate them.