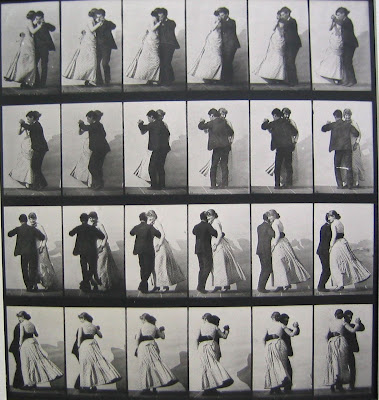 Many years ago, I was in the bookshop at MoMA and came across a French book on the history of motion in photography with the above picture by Eadweard Muybridge on the cover. I loved the contrast of the romantic moment captured with such scientific treatment and also the obscurity of the image. I had seen and handled lots of Muybridge, but never this particular image and I couldn’t get it out of mind.

(Muybridge famously developed a precursor to motion pictures when he rigged up a set of cameras to settle a bet as to whether a horse's four legs ever leave the ground at the same moment.. They do - but not in the outstretched position that artists had assumed until then. The only time they leave the ground simultaneously is when they are tucked under.)

Anyway, when I went back to MoMA to buy the book it was nowhere to be found. So I began to call everyone connected to Muybridge to see if they had the image. No-one. It was as though I had dreamed it up.

A number of years later, I was at Photo LA and speaking to some dealers who had Muybridge on their walls and everyone thought they had seen it at the fair but couldn’t remember where. Eventually I tracked the picture down at Michael Dawson’s booth and bought it!

This should have provided it a happy ending but instead of taking it to the framers it went into one of my various storage places and somehow getting lost. This is an extremely rare occurrence as in 18 years of dealing photographs, I have only lost one other print (the Manuel Alvarez Bravo photograph “Good Reputation Sleeping”).

Anyway, going through old j-pegs yesterday, I came across this snap of the Muybridge and thought I would share it. If you come across a print, it’s probably mine so let me know! 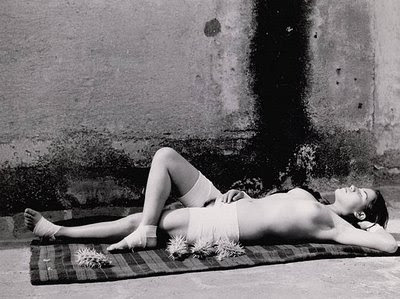 My other lost photograph.

Posted by The Year in Pictures at 6:56 AM

Oh what a pity!

Those are such great photos to lose!! What a shame