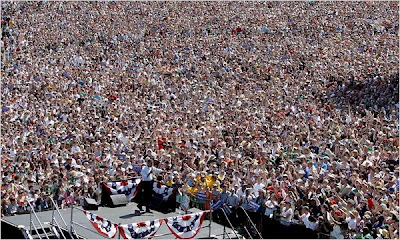 Somewhat buried in the back of today’s New York Times was this terrific photograph by Chris Carlson of the Associated Press. It’s of Barack Obama at Sunday’s rally in Portland, Oregon where an estimated crowd of 75,000 came out to hear him speak. I think it has to be the best photograph of the campaign so far and I’m surprised it didn’t make the front page.

Because of the Times’ production, however, it appeared in black and white in the paper while the original color version appeared online. So it was not an aesthetic or design choice, but while I originally liked the graphic quality of the black and white, on reflection I prefer the color, largely because of the red, white, and blue bunting. Again – your thoughts ….? 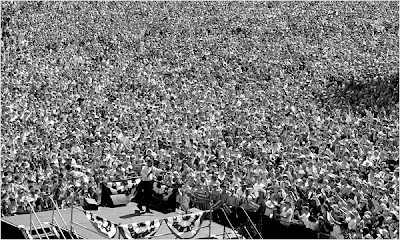 Posted by The Year in Pictures at 4:43 AM

Funny. I tend to lean toward B&W too but in this case I agree. Something about the sea of people, colors, hands and arms, very beautiful. And inspiring.

Also a nod to your last post. I love the Ali shot, something very tender about it and fragile.

Yes, this image certainly captures the wonder of Barack Obama's campaign. If I had to choose, I'd go for the black black & white image.

The B&W version, for me, captures something important about the potential of American democracy. The flag bunting shelters a single individual who reaches out to an endless audience -- this generates enormous resonance with our country's imagined history.

Because the image is black & white, it conveys more than the specificity of the Portland event. It captures our fantasy about America.

The color version, which is beautiful in its overall pinkness, lacks this historical resonance -- for me.

To me, the color feel more like it was taken on Sunday.

I like the b&w version because you can't really tell at first what is going on - and it looks vintage and possibly more important.

Have you ever noticed that from an airplane window, all the cars below look red, white, and blue? Well, in America anyway.

I think there must was an editorial reason to not put the photo on the front page. It would look too much like an endorsement of one candidate and compete with the articles saying that the popular vote is now about split evenly between Obama and Clinton. But it was just too good a photo not to use at all, so it got buried. That's my theory, anyway.

Aesthetically I think the whole picture is brought together better in the B&W format and I agree it makes the event feel more life changing unlike the colour version which looks like a Sunday afternoon rock concert.

I'd say color, we're talking about something real and something that happened now. It is an historic thing from this time, so it has to be in color and clear, no games or no eyes tricking. The bnw is pretty, but IMO this picture is a social, political document and has little to to with aesthetics and art in the context it was published. So, defenetly color.

It is the color version that brings out the ture spirit of the campaign. Withou the red white and blue flags it would have less impact and meaning. Just my opinion

You lose the outlines of the individuals in the crowd in the B&W. The size of the crowd is more staggering in the color.

I live near Portland but my husband supports Hillary so I didn't force the issue of going to that rally. Of course, I'll regret it always. I prefer the color picture, as ginger b says: it is more staggering. Chook said the color version looks like a rock concert - and that is exactly how KINK-fm radio in Portland described it over and over, noting that he drew this kind of a crowd and "his CD isn't out yet!"

I'm adding your blog to my blogroll!