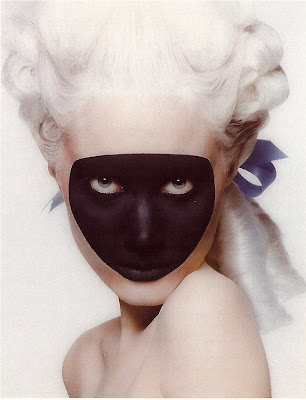 It never ceases to amaze me how certain themes miraculously present themselves. Last week this card (above) arrived from Phillips auction house promoting their upcoming London sale, followed the next day by the catalog itself. The day after I was browsing in Rizzoli's bookstore and two different books on display presented photographs of masked women. They were both striking pictures so I snapped them on my iPhone and filed them in the back of my mind. This weekend I was in the gallery organizing j-pegs of some of the pictures in my collection and noticed that there were two mask pictures - an Arbus and an Elliott Erwitt. Finally I was looking up Adam Fuss on Artnet and discovered an entire series he had done on masks that I had never seen before!

If you were to ask me what my least favorite subjects for photographs are, I would say without hesitation: clowns and mimes. So you would think masks would be next in line, but there's something different and intriguing about masks - the play of concealment and revelation, the graphic boldness of the shape, the power they bestow on the wearer. The depiction and use of masks goes back as far as the cave paintings of Lascaux so there's something inherent in the human character that compels us to use masks. The making of elaborate masks was a vital part of Greek, Roman, African, Japanese and Chinese culture. Not so surprisingly, in America masks seems to have more sporting than cultural associations. Think catcher's mask, goalie mask, football helmets, etc.. I can't think of another country whose sports need more protection. The Canadian artist Brian Jungen made an enormous art world splash a few years ago with masks made entirely out of reconstituted Nike Air Jordans, tying together a critique of consumerism and the co-opting of native culture with the creation of compelling and original new works.

To finish off this mask round-up, I Just saw Iron Man which was as good as I hoped it would be and the metallic armor and mask the Robert Downey character creates is probably the best made superhero outfit ever. (Subject for debate?) In addition I pulled out a few of my other favorite mask pictures. 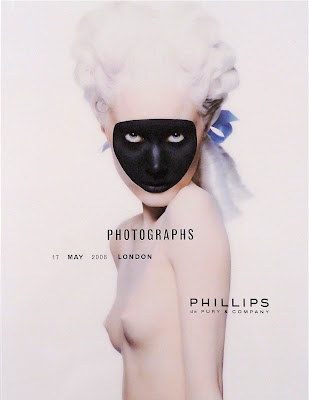 Inez Van Lamsweerde and Vinez Matoodhin from The Phillips catalog 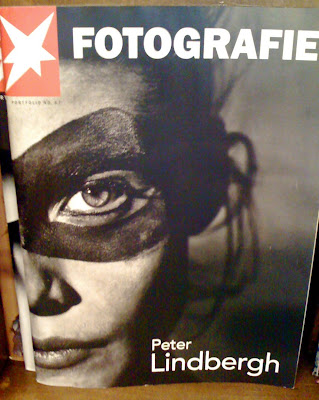 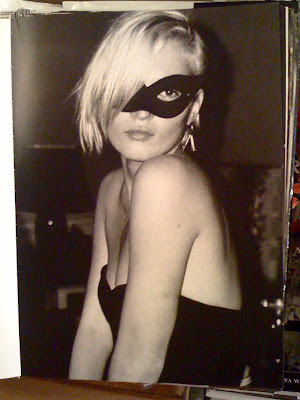 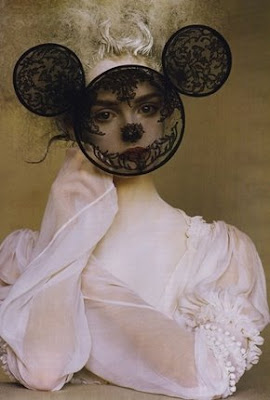 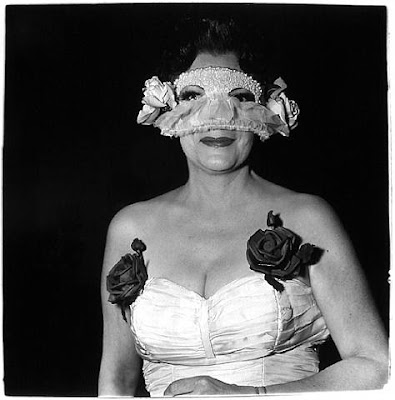 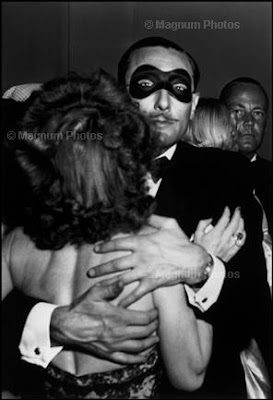 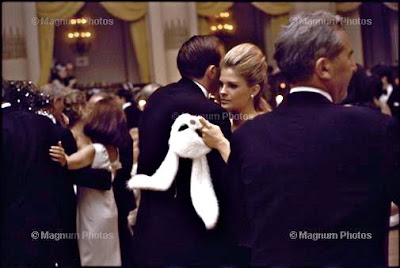 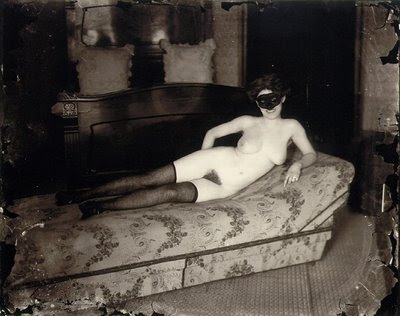 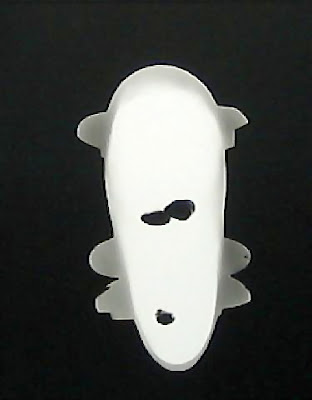 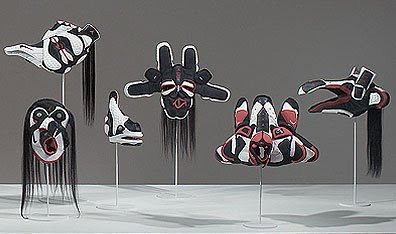 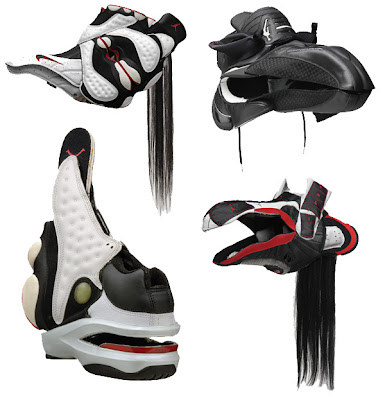 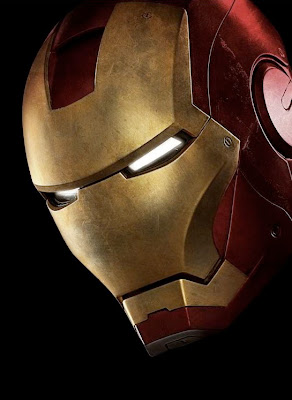 A few hours after posting this mask story, I received the following comment:

While I agree that the image is powerful and beautiful; and I appreciate your discussion on masks and its socio-cultural context. There is an additional angle an image like this brings up - that is the "black face" of minstrels in America of not too long passed. This is just another context for this image, not a critique. To think about image is to understand it many meanings in a multicultural world.

I think the writer makes an extremely valid point and my only response was to agree, and also to point out that because of the hair and make-up etc., I saw the image only as a fashion update of the baroque use of masks in balls, opera, commedia, etc., similar to the styling of the masked ball scene in Sofia Coppola's "Marie Antoinette". (See below.) The important lesson to me, though, is never to underestimate the different ways in which an image can be interpreted and to make clear no offense was intended. 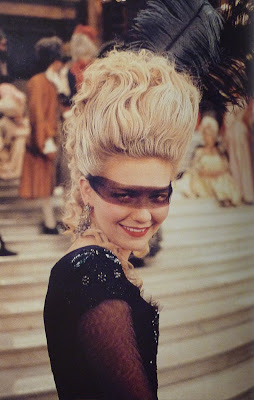 Any fit, attractive, naked woman (ie Kate Moss) will look good in a mask...or a paper bag or whatever. Clearly those are nicer than the Arbus photo.

While I agree that the image is powerful and beautiful; and I appreciate your discussion on masks and its socio-cultural context. There is an additional angle an image like this brings up - that is the "black face" of minstrels in America of not too long passed. This is just another context for this image, not a critique. To think about image is to understand it many meanings in a multicultural world.

Masks are interesting because of their hiding something... And you can also go back to the ancient tradition of the italian Commedia dell´Arte, to discover how much the masks of, for example, Arlequin or Brighella can say...

Regarding the "blackface" aspect of the top picture. I understand your point and thank you for bringing it up. It had not occurred to me. I was seeing it much more in the baroque tradition - the hairdo and pale skin are so 18th Century. But your comment brings up an important point on sensitivity.

To contextualize it as I saw it, I am posting an additional movie still from "Marie Antoinette" - a ravishingly visual film.

this is a great post -- i love the robert capa.

Really interesting post! I did a series for my BFA final on people dressed as a character or historical figure that they looked up to. I wanted to see if they would play the part or still be themselves under a mask.
In all honesty I think people were more themselves in the costumes than they were out of them. And they were much more natural and uninhibited in front of the camera than without them too. There is something about not being oneself that allowed them to then be the person they wanted to be without the worry of being judged. It was a really interesting project.
I love the images you have chosen. I have really been enjoying your thought provoking posts! Thank you!

I work in an art gallery and when we received this auction catalogue I was taken by the cover image as well. It is brilliant. I too saw the resemblance and reference to KD as Marie Antoinette. Great photos! Love masks - hate clowns!

I found your update referencing blackface very interesting because recently my school (Oregon State University) received national coverage for a controversy involving back face paint. Go to dailybarometer.com and search for the story, it's very interesting how it all developed... and I think relevant to your post.