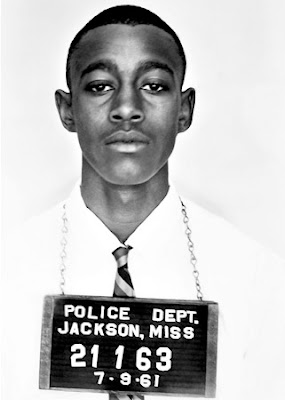 We are so used to seeing mugshots of intoxicated celebrities it’s easy to forget that this type of picture can have a more serious police purpose – or as is the case in the pictures above and below – can be a visual record not of justice served but of massive injustice.

These mugshots were taken of the Freedom Riders arrested by the local police in Jackson, Mississippi, in the summer of 1961. The men and women pictured had boarded buses in Washington and were heading through the deep South to challenge states who were upholding Jim Crow laws and flouting the U.S. Supreme Court’s decision prohibiting segregation on public transport. They were met by violence at almost every stop and after one of the buses was firebombed outside of Alliston, Alabama, CORE leadership wanted to call off the rides. However, an undaunted (and integrated) group of protesters continued to Mississippi where they were arrested and jailed. Far from being intimidated, their example encouraged even more civil rights workers to head south, and before long Jackson’s jails were bursting.

While it would take considerably longer for the situation to improve even slightly, if you want to see what dignity and courage look like – these pictures say it all. You can only be awed by the courage displayed by people who had every right to fear that their lives were in danger, but whose moral certitude allowed them to stare down a police photo- grapher, hold their head up, and in the case of Helen Singleton even allow a knowing smile to cross her face. (She just knew that history would prove her right.)

Celebrating these heroes, the photographer Eric Etheridge has just published a remarkable book Breach of Peace: Portraits of the 1961 Mississippi Freedom Riders, in which he tracked down over 70 of the former Freedom Riders, took their portraits and recorded their stories. His contemporary portraits appear alongside many of the original mugshots, and as you can see in the very last picture, Helen Singleton has lost none of her twinkle! 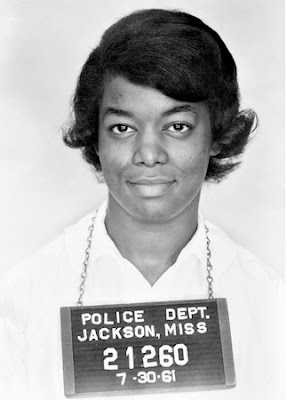 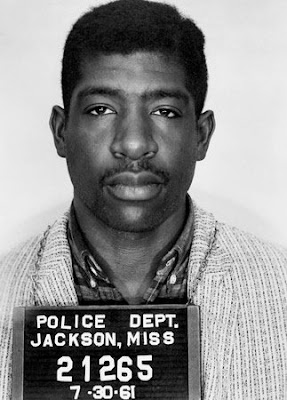 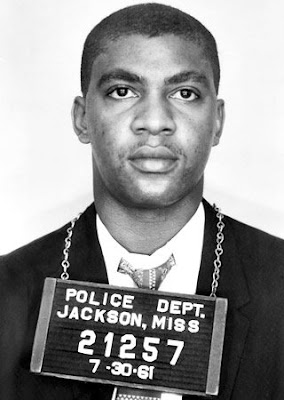 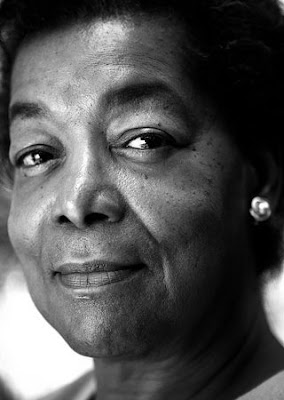 Posted by The Year in Pictures at 7:17 AM

EXCELLENT!
Keep up the good work!

Thank you for posting these photos.

what a beautiful statement. thank you for this post. i recently did some work with a group seeking pardons for blacks wrongly convicted during the civil rights movement and it is nice to see these faces are not forgotten!

Wow is all I can say on this post. It was very moving and powerful. Well done! I think in today's society people are too involved in the lives of celebrities instead of paying attention to what really matters like the Freedom Riders

Great! Very good peice. Great writing. People forget about everything that happened then. Thanks for bringing it all back to the forefront for a bit. Pictures are great. KC

Excellent post! It is refreshing to see someone blogging of something important. The Freedom Riders and what they were trying to achieve should not be forgotten. Thanks for the reminder.

Wow~~~~~
thanks for sharing these great art~~~this is just wonderful~~~~

Thank you. These are amazing.

It's people like these that inspire me to not be afraid to stand up for what I believe is right. I loved the last picture of Helen. She has aged beautifully.

Again, it is good to see pictures with such a strong story and history. I attended my last year of high school at Little Rock Central High which is very related to those days in the deep south. From the perspective of an exchange student from Argentina that was a big cultural shock to realise it really happened and wasn´t just more of the Hollywood script. Sadly that is what gets to foreigner eye.

Thanks for the correction! Change made.