A Short History of Subway Pictures 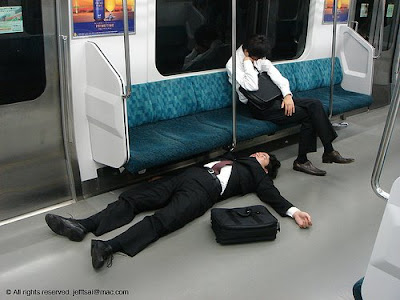 I’m always trying to figure out exactly how to best use flickr. I know there are untold photographic riches to be mined – but how exactly to extract them?

I was recently sent a link to a series of photographs of sleeping Japanese commuters which inspired me to look up what other pictures there were on the subject, and - BAM! – a little treasure trove that’s funny, and interesting, and illustrates the vast cultural differences in the world. 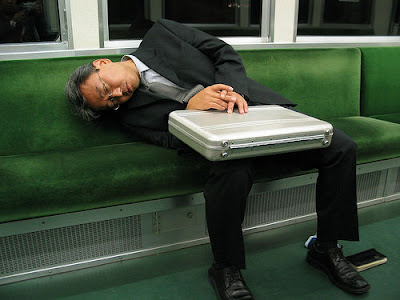 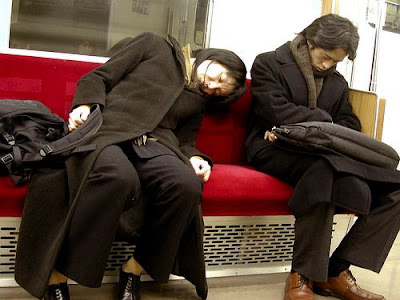 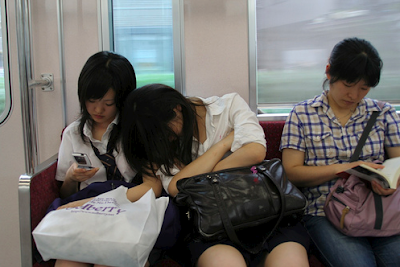 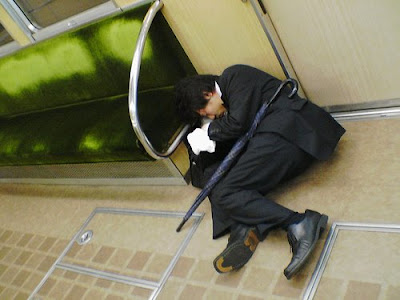 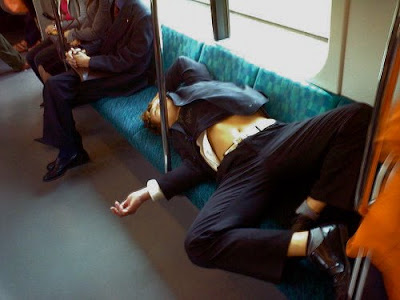 These pictures got me thinking about subway pictures in general and I figured I would post an incredibly brief history of the genre, starting with Walker Evans’ famous series taken in the late 1930s. In this groundbreaking work, shot surreptitiously with a 35mm lens poking through his buttonhole, Evans aimed to break free of the artifice of conventional studio portraiture and went on to create one of the most important and influential series in American photography. It took twenty years for the pictures to be published, but the series became a seminal point in the medium. "It was" he said, "my idea of what a portrait ought to be: anonymous and documentary and a straight-
forward picture of mankind."

This definition and a reliance on the hidden camera became both a mantra and a direct template for Harry Callahan’s “Women Lost in Thought” and P.L. DiCorcia’s “Heads” – two of my favorite bodies of work which while they happen to be taken on the street are really "subway" pictures in the Evans tradition.

In between Callahan and DiCorcia, there was a true return to the subway, Bruce Davidson’s 1980 “Subway” with its adventurous blend of Color photography (with a capital C) and photojournalism. Four bodies of work – four totally distinct visions. (And to prove that everyone is influenced by someone, Evans was specifically inspired by Honoré Daumier's “Third-Class Carriage” of 1863 - a painting he saw at the Met.) Now build on that! 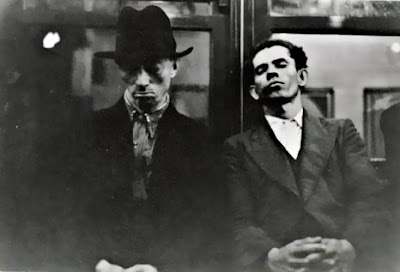 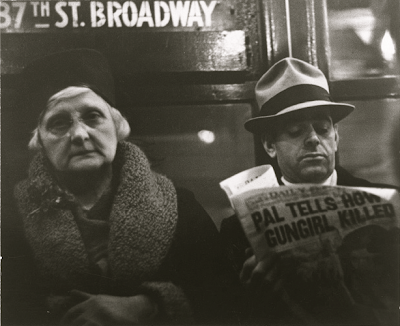 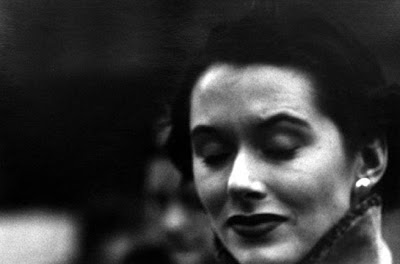 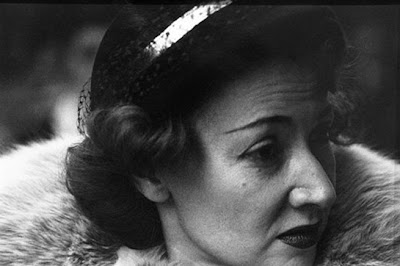 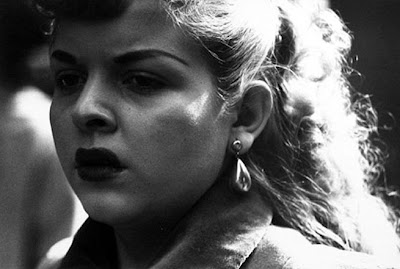 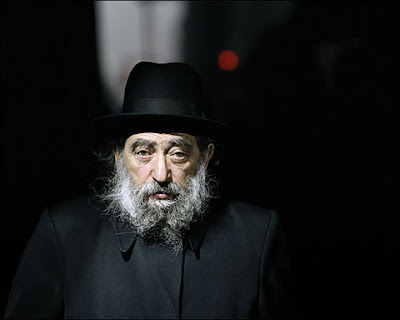 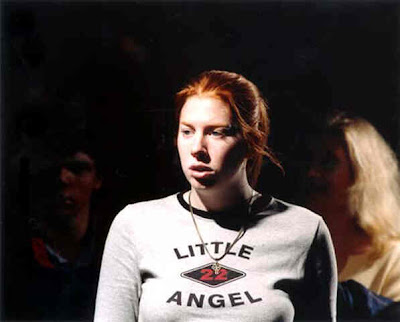 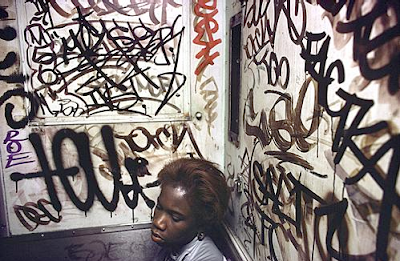 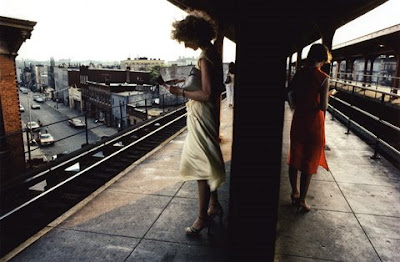 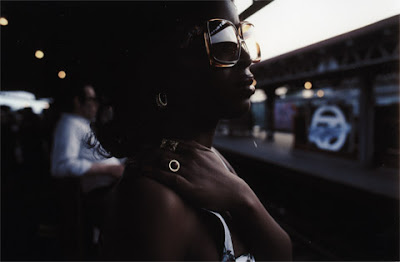 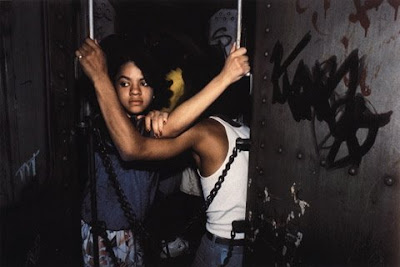 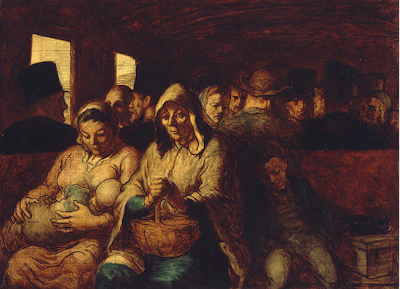 Posted by The Year in Pictures at 8:40 AM

I see that you have included the photograph of a bearded man by P.L. DiCorcias, a picture which had provoked a lawsuit by its subject, who had claimed that he enjoyed a right to privacy -- to not be photographed -- even when walking on a Manhattan street. Fortunately the man's suit was not successful!

Been building on that for quite some time. A couple of years ago I put together some of the results, in book form. A click on my name brings it up.

A quick note of apology. I meant to credit the flickr photographers whose work I posted. I am going back into my history to try to add those names and will add them as soon as possible.

Re: P.L. DiCorcia's top photo - it was an interesting and important case about which I should and will write more. Suffice to say, however, and I've said this to P.L. himself, I think the subject should have had some rights to his own likeness. But this is very tricky territory.

This is a very interesting post on street photography by hidden camera. I was not aware that Callahan had done a body of work with this M.O. I shoot my street photography with a hidden camera (or, let's say, I don't aim through the viewfinder...) because it' lets me get closer to the subject, it lets me get a more candid expression, and it avoids that the problem of getting a load of shots that point down at the top of someone's head (I'm 6'4").

I've always had trouble justifying this style of shooting since it's not how people like Winogrand and Cartier-Bresson would work. Thanks for helping me feel less like a peeping Tom :-)

So interesting :-)
Unfortunately I don't own a camera I can snap through the button hole of my jacket with, but sometimes I like to pretend i'm 'looking through my photos' on my digital camera while really taking a couple of quick snaps. My favourite is taking photos while you walk by though, the person must totally be wondering 'did they actually take a photo of me just then or did i imagine that?!', and i get the surprise later of what came out of the walk-by shoot...

fabulous. diCorcia is one of my all-time favourites.

fantastic post! thanks for the history. i've always been interested in public transportation and i love anything subway.

if you take my pic and don't ask about it I will hit you with my cane I have a right to be left alone and not :"captured" by someone who lives via other people and not within himself.

The earliest photographs of the sleeping Japanese travelers that I know is 1983's Sans Soleil by Chris Marker. It is a film you should see.

Ahh long train rides, reminds me of when I use to live in australia.

the results from spy tactic photograph are always fasinating for the manerisms they catch would normally be self censored.

Best post yet! So inspiring. I would also add Robert Frank's From the Bus series. Okay, off to look up more Walker Evans and Bruce Davidson photos. And as for the guy who said he's gonna hit people with his cane if they take his picture- YOU ROCK DUDE!

LOVE THE SUBWAY SHOTS AND FACES.

This series was so great, thanks for posting it!

Try these also for size...this site makes me happy and I still don't know why.

Steps of the Underground
http://sapatafisica.blogspot.com/

A friend talk to me about your blog and I came in.

I liked this post, specially the first DiCorcias's and the four Davidsons's. And of course the Honore Daumier picture, it's so real!

As a small-time journalist (who often has to be a jill of all trades), I feel weird taking photos of people in public without their knowing - or worse yet, against their will. But seeing the realness of these photos makes me think it might be a necessary evil to document something bigger. Anyway, thanks for introducing me to these artists!

great post. I love coming to this blog; there's always a new perspective on something.
- Jessie -

I visited Laos, Cambodia and Vietnam, recently. One thing I noticed was how often you see people sleeping in public and in unusual places. The reason for this, I discovered, is that people in these countries work pretty hard (lots getting up at 4 or 5 in the morning and not getting to bed until midnight). Working really long hours, getting a cat nap whenever / wherever they can.

Love the second picture! and the last picture before "Four Bruce Davidsons." almost made me cry, don`t know why. love the look in the girls eyes.

you can actually buy a sleeping stand in Japan so that you can sleep while standing up and leaning on a stick on the subway.

After having read this post I started reading up on Bruce Davidson's Subway series- which I knew nothing about. Those have quickly become some of my all time favorite photographs. Remarkable pictures. I found a copy of the book but it was over 200 bucks. I wish someone would reprint that book. Those photographs are just so powerful- I can't believe I had never seen them before.

Coincidentally I think I saw the Daumier painting (or one on a similar theme) yesterday at the Walker Gallery Liverpool. They've just opened a great exhibition on 'Art in the Age of Steam'. The interesting thing is that artists never seemed to get to grips with the trains themselves, it was always the passengers they wanted to paint. If you find yourself in Liverpool it's worth a visit: www.liverpoolmuseums.org.uk/walker/exhibitions/steam/ There's some Manet/Monet/Hopper show stoppers in there!

I lived in Japan for a while, the Japanese people were always asleep on the subway. I always wondered how they new to wake up before their destination.

What a lovely, inspirational blog you have.
I love your photos and commentary.

your blog is just so very beautiful and artsy. GJ!

so many things can happen on a subway;)

Arresting and thought provoking images throughout the site - but as a lover of urban environments I particularly liked the gritty b & w subway pictures.

Keep up the good work -

Really interest collection. I saw many stranger situation in subway.