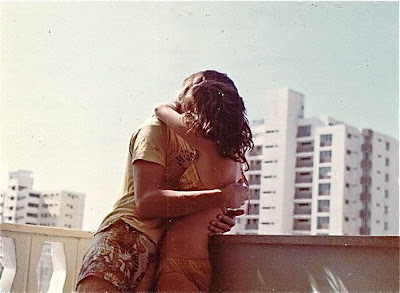 This is a picture of the photographer Hannah Huffman’s parents taken, I presume, in the 1970s. She posted it on flickr two months ago to celebrate their 33rd anniversary, from which point on the picture took on a life of its own - ricocheting around the blogosphere as people responded to the romance and sensuality of the image.

I first saw it on A Cup of Jo and thought it would be interesting to trace the viral path of what was once just a family snapshot, but was now becoming a visual symbol of the ideal relationship.

As it turns out I could only trace it four steps backwards, as carrier number 4, try as she did, could not remember how she first saw it and Hannah Huffman did not respond to my e-mails. So I figured perhaps this blog would help uncover the missing links in the daisy chain of how it got from “Haeshu” (Huffman’s flickr nom de plume) to me. But even the short journey has been an interesting and pleasant one with the discovery of different blogs and the camaraderie of all the different participants to date.

For anyone interested (and who have read this far) I got it from A Cup
of Jo who got it from Amy Nation who got it from sk-rt.com which recommended Jen Gotch’s flickr photos (alias "Danske") where the image was listed as one of her flickr favorites.

That was where my trail ended. Anyone who can shed light on how it got from Hannah’s “Family History” flickr set to Jen Gotsch’s “flickr favorites” - or anyone who thinks they have an equally good snapshot, let me know.

But what a great picture - and as a number of people have pointed out - cool swim trunks!

P.S. There’s a pretty good second picture in the set which no-one picked up on (below). 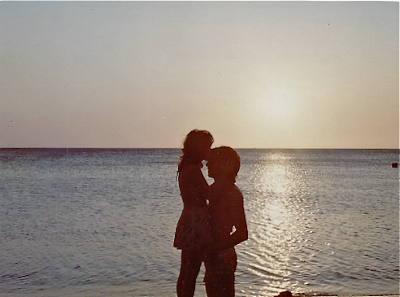 Posted by The Year in Pictures at 9:03 AM

they are the sexiest couple ever. i love these shots.

where can we send these snaps? email address?

Thanks for this post!
this is so gonna be in my inspiration book!
it gives me so much hope... :)

The pictures are really great! Good job investigating :)) The story makes it even better!

I agree with akvillina, good job on the investigating!! need to investigate learn how to do this investigating thing. The story does make these picture so much better.
Good job
love your blog