Top Ten #6 - When the Light Goes: A Novel. By Larry McMurtry 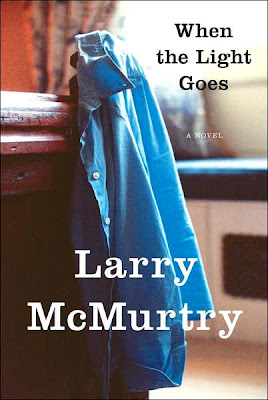 While the cover misleadingly uses photography to reference "Brokeback Mountain" (for which McMurtry co-wrote the Oscar winning screenplay) "When the Light Goes" is in fact the latest and fourth installment in his Thalia series. Set in Texas oil country, the series began with the 1966 “The Last Picture Show”, followed by "Texasville", and the wonderfully alliterative “Duane’s Depressed”.

“When The Light Goes” picks up Duane Moore (the Jeff Bridges character in "The Last Picture Show") at 64 - now widowed, semi-retired, and crisied in just about every way. When I told my friend the über literary agent Mark Reiter I was reading it, his comment was “Oh, the sex book!” and it’s certainly….. frank. If that’s not enough to recommend it, McMurtry's writing is so sharp and breezy it’s one of those books you race through and then makes you want to go back and read all the others in the series.

Posted by The Year in Pictures at 5:14 PM