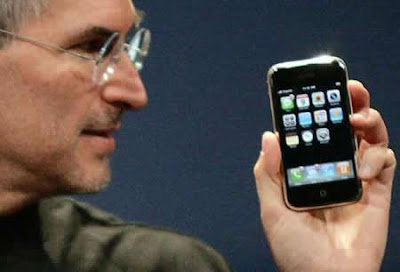 Just as the Walkman and the first MP3 players ushered in a new era in how we listen to music, the iPhone presages the era of the all-in-one machine in a way that I'm still not sure has been fully recognized. It is a device out of science-fiction and it's been interesting to note not only the incredible press, but also the level of skepticism and hostility. So I think it's only begun to tap its market potential. (Let's see where Apple stock is next year.)

Trying not to be caught up in the initial hype, I resisted as long as possible (about three months) but after spending long hours at the Apple Store after both my children broke their computers, I gave in. (It was fortunately just after the price drop.) But, boy, do I love my iPhone! And don’t believe the scare stories. Everything about it works flawlessly and it’s really simple to master. In order of frequency the applications I use most often are: phone, iPod, notes, photo album, camera, weather, and the link to You Tube, but my newest pleasure is using it to listen to podcasts of Studio 360 as I walk my dog. Now that’s cultural enrichment!

Posted by The Year in Pictures at 5:34 PM