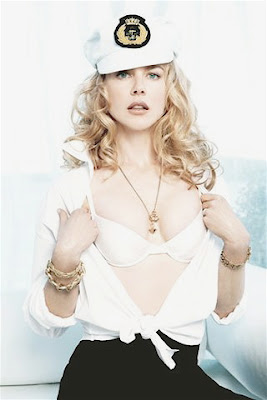 This week's unveiling of a new waxwork of Nicole Kidman at London's famous Madame Tussaud's is a chance to comment on one of the most extraordinary cover pictures of the year, but one that passed by with almost no attention. Taken by Patrick Demarchelier for the October Vanity Fair, it shows Kidman in a jaunty nautical cap opening her blouse to reveal her victorianly white skin and a Carine Gilson bra. Her eyes are unfocused, her lips parted as seductively as her current face allows. It's a strong and surprising image with an almost Arbus-y subtext as the subject seems pinned into her moment of odd revelation. It's a great cover shot.

Demarchelier is so prolific I'm not always sure people recognize quite how good he can be. But what I found so surprising about the image is: a) that Kidman found the need to do it; and: b) that once done it seemed so un-noteworthy. Did she want us to see that as she approaches 40, she looks every bit as good as her waxwork likeness (in the red dress)? In the age of photoshopped covers and nip and tuck, a glossy magazine cover picture is more an illustration of a concept than something with any great basis in reality. However, I would have thought there would have been at least some feminist outrage at the sexual objectification of one of the more accomplished women of her age. Perhaps in a time of panty-less celebrities a pale poitrine and expensive underwear is just the touch of class we need! 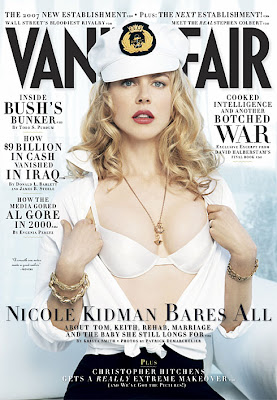 Posted by The Year in Pictures at 5:30 PM