Will The Photographer Who Took The Image This Ilustration Is Based On Please Stand Up? 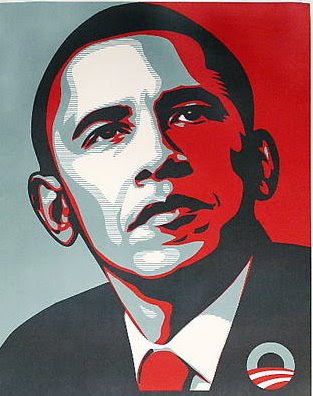 An e-mail today from Tom Gralish, staff photographer for The Philadelphia Inquirer, re-kindled my interest in one of the great photographic mysteries of the year. Namely – who is the photographer whose image of Barack Obama was the basis of Shepard Fairey’s iconic HOPE poster (as well as the prior PROGRESS and subsequent YES WE DID and BE THE CHANGE posters)?

Fairey has gone on record saying he found the image from a Google Image search, while his wife, Amanda, told me it was a screen grab. But you would have thought that by now the photographer would have stepped forward to claim credit – either for monetary gain or simply to get his or her authorial credit. As Gralish points out in his blog, there have been no shortage of people claiming to be the subjects of Eisenstadt’s famous VJ Day kiss photograph, and the same thing with Dosineau’s “Kiss”. So what’s the story here?

I do want to go on record as saying this is in no way a criticism of Fairey – who I’m a big fan of. His work is "transformative", the key legal issue where appropriation is concerned, and in most other cases Fairey does credit the source. So I think that ethically and artistically he's in the clear. I also believe it when Fairey says he does not know the source. Google Images often have no credit.

When Fairey began his support of Obama not only was there was no certainty he was backing a winner, but it could be argued that his work was key in helping Obama by reinforcing the message that here, at last, was someone different and whose values (or brand if you want to be cynical) he so skillfully drew attention to. But the particular picture Fairey chose - where the expression is just the right combination of purposeful, enigmatic, and thoughtful - was singularly effective and smart.

So if anyone can shed some light on the identity of the HOPE image photographer – please let me know!

Posted by The Year in Pictures at 8:51 AM

I'm pretty sure I found it. Jonathan Daniel in Time Magazine.

It's possible it's based on a frame capture from video, not a still image, which would explain why no photographer has been identified. I've been staring at it trying to imagine where it might have been taken. Seems he is listening to someone else speaking, so it occurred to me this could have been taken from video, such as a "cut away" shot from a debate, or a Senate committee hearing.

Enough with the Obama stories.

If one looks at his shirt collar and his sholders he appear to be sitting down.