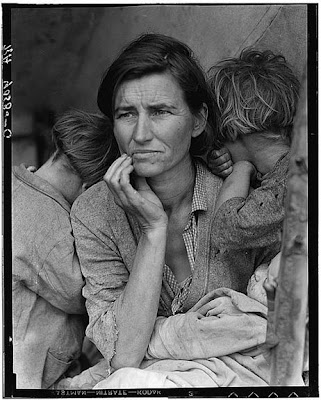 As I wrote recently, Annie Leibovitz's new book "At Work" is an engrossing and insightful read. In addition to the stories about her own work, it's always interesting to hear one great photographer talk about another and I was particularly taken with the backstory Leibovitz recounts to Lange's iconic "Migrant Mother" of 1936 - a story I did not know.

Looking for a j-peg to illustrate the post with, I found this one which struck me as as a particularly sharp and well-rendered scan. While I've seen literally dozens of original prints of the image, I'm not sure I've seen anything quite as succinct.

Anyway, here is the passage about the picture from "At Work":

After spending a month on the road in southern California she (Lange) was finally heading home. It was raining and she was exhausted and she had a long drive ahead of her. She had been working up to fourteen hours a day for weeks and was bringing back hundreds of pictures of destitute farm workers. Somewhere south of San Luis Obispo she saw out of the corner of her eye a sign that said “Pea-Pickers Camp.” She tried to put it out of her mind. She had plenty of pictures of migrant farmers already. She was worried about her equipment, and thought about what might happen to her camera in the rain. She drove for about twenty miles past the sign and made a U-turn. She went back to the sign and turned down a muddy road. A woman was sitting with her children on the edge of a huge camp of makeshift tents. There were maybe three thousand migrant workers living there. Lange took out her Graflex and shot six frames, one of them of the woman staring distractedly off to the side while two of her children buried their faces in her shoulders.

The image of the woman and her children became the most important photograph of Dorothea Lange’s life and the iconic picture of the Depression.

When I’m asked about my work, I try to explain that there is no mystery involved. It is work. But things happen all the time that are unexpected, uncontrolled, unexplainable, even magical. The work prepares you for that moment.

Serendipitous post. I was musing last night that as the Obama's re-decorate the White House, that they might include artwork of the 20th Century.

At first I thought of painters - Rothko, Close, etc. And then I thought - Dorothea Lange! What better photographer for the White House in these times?

Here's some more info about Migrant Mother from the Library of Congress' Prints & Photographs Division. The original negatives are in the FSA/OWI collection.

There are several versions of the image, most notably one showing the woman's thumb holding back the tent flap, and one with it retouched.

Back in the early 90s, I worked on a project at the Library in which I handled many of the original negatives from the Farm Security Administration photographers like Lange, Walker Evans, Russell Lee, and others. The entire collection is online here:

America from the Great Depression to World War II: Photographs from the FSA and OWI, ca. 1935-1945

Full disclosure: I'm currently a web developer at the Library of Congress, and a shameless evangelist for our wonderful online resources.

This is a link to a recent CNN report on one of the children from the photo. I thought you would be interested in her recollections of the photo being taken.

Just an FYI: At the Library of Congress you can order prints + sometimes download high-resolution images that were taken by photographers such as Lange or Lewis Hine. If I remember correctly it's because they were working for a certain government division at the time.

E.g. you can download a full-resolution 55MB .tiff of the Migrant Mother image here:

The mother in the photo is Florence Thompson, a fellow Oklahoman, revealed many years later that the notoriety the photograph brought was a source of shame to the family. The family migrated to California to pick peas and didn't want anyone to know who they were.

The photo is brilliant, but that is the other side of the story that most people don't know about.

I think Annie's comment is really about the idea of photo insecurity. Working 14 hrs and then still not having had enough or possibly just one more that will satisfy the addiction. Never having to actually quit and be satisfied. I think this somehow inspires Annie to create more opportunity to investigate the subjects to the point of exhaustion for all of the players. I think it is compulsion driven by ego. I prefer working smarter not harder and being a better editor and if it takes 14 hours of shooting to get to the point these days I think it's just a fetish or addictive form of behavior. there was a study by Rollo May in the late 50s about how artists had to create a certain amount of anxiety for themselves to actually hit that creative groove. I don't think Dorothea Lange drug her crew of 10 around for those 14 hours either.
Rollo May: "Creative people... are distinguished by the fact that they can live with anxiety, even though a high price may be paid in terms of insecurity, sensitivity, and defenselessness for the gift of 'divine madness.' end