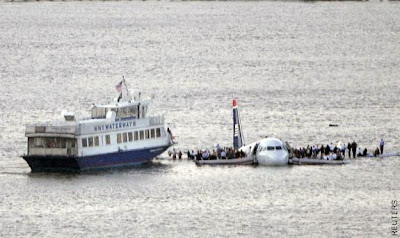 It’s been a great week for picture agency Reuters. First the attribution of Jim Young’s Obama photograph. And now their photographer Gary Hershorn took this picture which made the front page of both The New York Times and The New York Post in what is now being called ”The Miracle on The Hudson”.

The miraculous tale of survival came when pilot Chesley B. "Sully" Sullenberger III made an astonishing controlled crash landing into the frigid Hudson River after a flock of birds knocked out both engines 15 minutes after takeoff. By landing the plane at exactly the perfect angle and shutting off all the valves that would let water in, he kept the plane intact and afloat and all 155 people on board were rescued with the most severe injury being a broken leg.

In this picture, airline passengers wait on the wings of the plane to board one of the dozens of boats that sped to the crash within minutes, further saving the passengers from hypothermia in the sub-freezing temperature. As my wife commented, "It looks like a sick puppy being taken care of by its mother!"

Posted by The Year in Pictures at 8:09 AM

this was so amazing. who knew a plane crash could ever end up this benign?

I fear flying enough as it is, I can't even imagine ever having to hear the pilot say the words "please brace for an impact" as one of the passengers reported.

I honestly think I'd start crying like a little girl if I heard that.

I think everyone for once needed a good ending.And if I may get spiritual for a second, perhaps this is just an event that symbolizes that indeed we have entered the age of Hope.

Sully deserves a medal. What's also amazing, in this age of cell phone cameras and quickpix digitals is that not a single image of the landing itself has surfaced.

This is how the world is going to be under Obama, people.
Bush = disasters, Obama = miracles.
Seriously.

You can read about how Reuters covered the plane crash here.

I just wanna say , im reading your blog since 1,5 month and i love it..I studied graphic arts. and photography always been a passion for me and now enjoying reading and seeing interesting and beautiful staff.