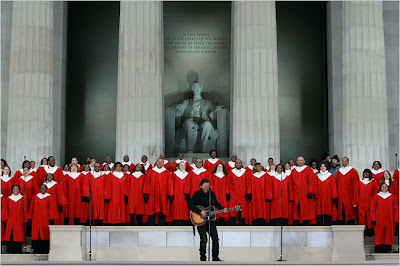 Bruce Springsteen performing at “We Are One,” a concert on Sunday at the Lincoln Memorial celebrating Barack Obama’s inauguration. Photo by Justin Sullivan/Getty Images

Clearly the second big star of the inauguration is old Abraham Lincoln. Not only is he Barack Obama's constant reference, but as these pictures show, he is also the photo-op de jour. I love Sullivan's photo of Bruce Springsteen which ran on the front page of today's New York Times Arts section (while at the same time the paper's business section ran a story highlighting the paper's dire financial situation). It will be a sad day if great papers like The Times fade away.

My favorite Lincoln story of the week, however, involves the Obama family's visit to the Lincoln Memorial, as recounted by the President-elect. After looking at the words of Lincoln's second Inaugural Address and answering some of his family's questions about his own forthcoming speech, the Obamas' daughter Malia turned to her father and said "First African-American President ... Better be good."! 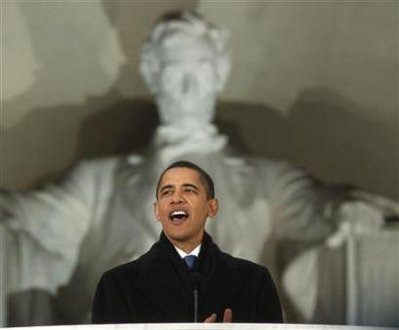 That second photo is amazing. Lincoln's presence is so huge... as if he's watching and waiting to see if what he helped create can live up to the enormous expectations and hopes placed very literally on his shoulders.

I too love this blog. The photos are amazing, and Malia's quote priceless.