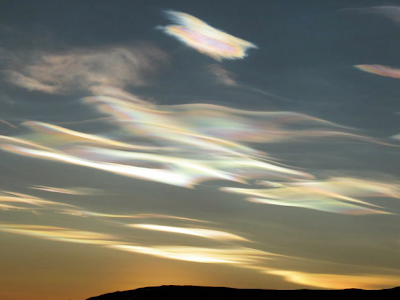 As regular readers of this blog know, I’m a big fan of sky and cloud photographs. So photographically speaking, the cold weather brings at least one good thing – we’re entering the season of nacreous clouds.

Nacreous are among the rarest of clouds, they are mostly visible two hours after sunset or before dawn when they shine brightly with vivid and slowly shifting iridescent colors. Compared with most lower altitude clouds, nacreous clouds stand almost still - an indicator of their great height (some 9 -16 miles high). Their brightness is because at those heights they are still sunlit. They can be found mostly at high latitudes like Scandinavia, Iceland, Alaska and Northern Canada. However, they do occur as far south as New England.

Photographing clouds is a tricky thing – it takes a special vision to make something that’s more than just pretty pictures. But as Alfred Stieglitz, Eliot Porter, Richard Misrach, and even Bruce Weber have shown, there are always ways to make a personal statement out of the ephemeral. 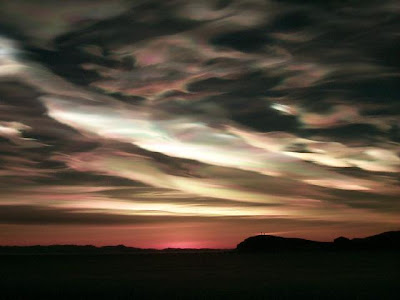 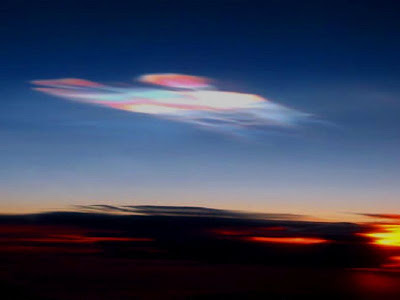 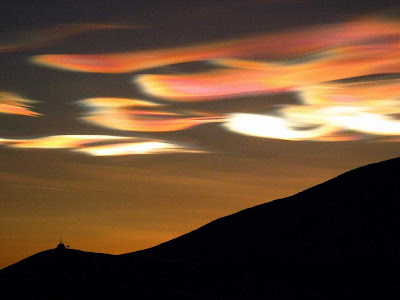 Posted by The Year in Pictures at 7:38 AM

Clouds are to white water as the air is to the ocean, aside from being beautiful, that is. And, yes, yes, yes, there is nothing like a great cloud photo! May I mention that what is commonly referred to as pollution makes clouds too, that bold sunsets often have to do with cloud particles that would be considered natural and not so natural but nonetheless make for clouds that, in one way or another, are beautiful? To wit:
http://johnpfahl.com/pages/smoke/S10.html

well then, you've just given one canadian girl a very god reason to get up a little earlier.

You get them up around Scotland as well, I only remember seeing them once in my first year of university on St. Andrews Day, was fantastic.

Lovely photos, I'm also a big fan of the sky and light.

These dynamic photos remind me of an experience I had in seeing and hearing the aurora borealis.

I like to view and photograph clouds, full moons, moonbeams, the full sun, sunbeams, and stars.

My heart leaps up when I behold a rainbow in the sky. ~Wordsworth

I just watched the 1983 movie, Local Hero, about a Texas oil Tycoon who wants to buy a Scottish town to drill offshore. The beautiful sky there plays a big part in the town's fate.