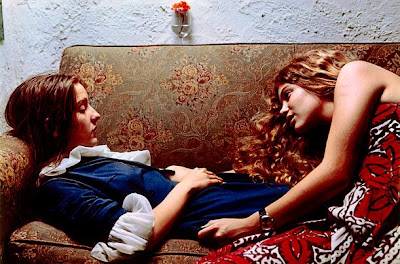 A lot of good things came in pairs this last week. The William Eggleston show opened at The Whitney and runs through January 25. This untitled image from 1975, while somewhat atypical, has always been a favorite. I like the contrast of the modern American look of the girl on the right with the pre-Raphaelite look of the girl on the left. If you divide the picture down the middle and look at it one half at a time, there's an amazing visual dichotomy. 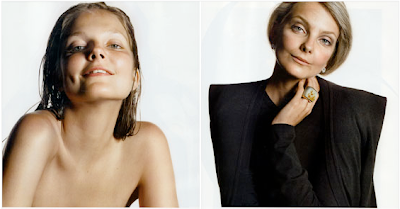 I've unfortunately lost track of where this picture came from (please post if you know) but the pictures illustrate how skillful styling. lighting, and photography can make the same model looks decades younger and older! 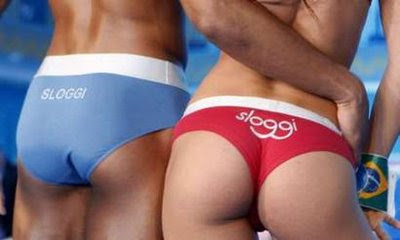 Pretty silly, but here are the winners of the "most beautiful bottom in the world" competition, just held in Paris - Brazil's Melanie Nunes Fronckowiak (R) and France's Saiba Bombote (L). 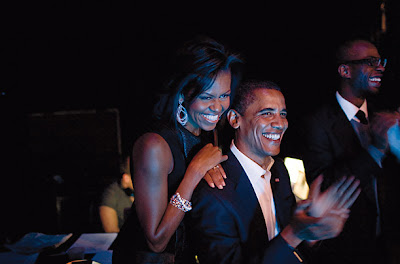 I gave Callie Shell a hard time for what I called her "rip-off" of Paul Fusco's "RFK Funeral Train" pictures, and the response was quite divided. To redress the accusation, TIME have just published a portfolio of her pictures from the Obama campaign. Click here. I particularly like this moment shot while the first couple elect were listening to Bruce Springsteen. Unless the pictures lie, the Obamas do seem to have an extraordinarily good relationship. 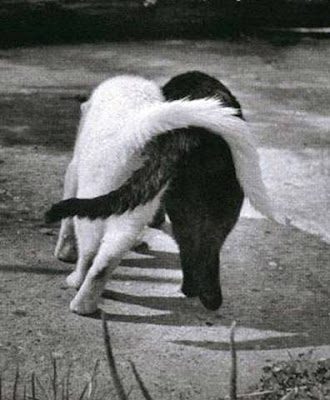 And finally, one of my favorite "couples" pictures. I had this for years as a postcard and didn't think I'd ever be able to find a jpeg, but a google image search of "black and white cat tails" brought it up!

James, you've been on a roll lately. I'm always happy to see a new post from you come up in my reader.

Pairs...different than twins, and yet not a random group.

I love this one of the Obamas, catching a quiet moment together. You can just see the exhaustion and the comfort. Some of the others are more 'in the moment' and more interesting, but this one just gives me pause.
http://www.digitaljournalist.org/issue0810/images/callie/21.jpg
It's from Callie's larger collection of the campaign.

Hi, I believe the photograph is from French Vogue. I am not sure which month -- either last or this. It was an issue about age. Vanessa Paradis is on the cover..

The photos of the model aged 10-60 is from Paris Vogue, Nov08. Funnily enough, I was just looking at them here when I saw your post: http://missatlaplaya.blogspot.com/2008/11/magic-of-make-up-photography-and-good.html

I love the Eggleston photo - such rich colours and expression.

The shot of the Obamas looks a lot like Bill Henson's opera photos.

The TIME photos are phenomenal ...although I am quite taken by Obama and that alone could be the reason. I only find one of Callie Shell's photos to resemble Fusco's now.

*and those are top notch bottoms :)

Miss Brazil has a killer tush workin' and is derserving, but Mr France I just don't see it workin' as well.

The perfect couple to me is the cats-Yin/Yang in every aspect.

All these photos are amazing. I just love to be in your blog!