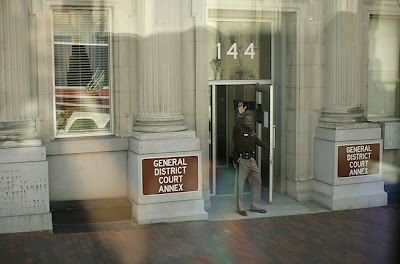 When is appropriation imitation? When does homage need to be referenced? These kinds of questions come up frequently in art and photography – the most recent case being a photo essay on Time.com that treads closely in Paul Fusco's footsteps.

The pictures were brought to my attention by Michael George, currently a Photography and Imaging major at the Tisch School of the Arts at NYU. Michael sent me a link to his blog, Inceptive Notions, where he points out the more than coincidental similarities between Callie Shell’s “The Campaign from Obama’s Point of View” and Paul Fusco’s “RFK Funeral Train” series, which as many of you know, I just finished exhibiting. Click here to see Fusco’s seminal images. 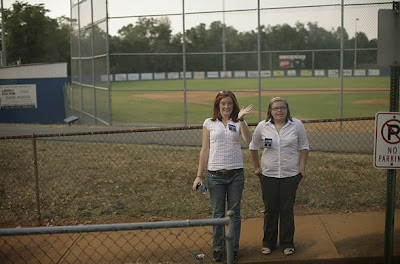 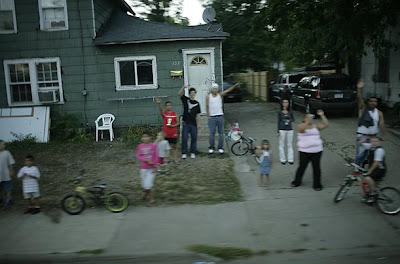 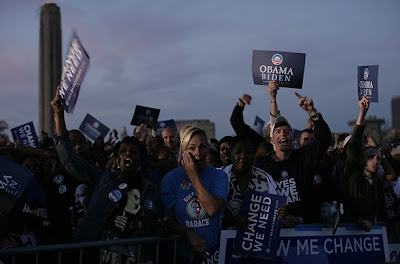 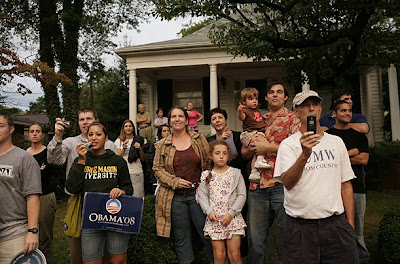 Posted by The Year in Pictures at 6:29 AM

By no means would I ever claim to have an artful eye, nor do I even know if what I just said makes much sense. But I don't see what you're saying.

Fusco’s work wasn't...after all...from RFK's point of view. Obviously. And Fusco’s work is comprised of all rail road photos, where the Time photos are not.

I will say Fusco’s work is hard to stop staring at and the Obama photos might as well be placed in a scrap book along side pictures of the family vaca to DisneyLand.

Surely the concept here is such that more than one person could have come up with it independently? So the accusation of a "rip off" would need more evidence than simple resemblance.

So many photographers are inspired by those that came before them, so it's a shame this one didn't give credit where it was due. I also agree that, at least from the selection on your site, they don't have near the power of Fusco's pictures.

Thanks for continuing to bring your readers such an interesting array of photographic work and commentary!

what a strange series to reference. I can't quite pinpoint it, but something just doesn't sit well with me. Shell's work references the possibilty of an Obama assasination much more than it puts you in his shoes.

I agree that this is directly referencing Fusco's photographs, and that she should have credited him. While taking a photograph from a train or a bus is certainly an idea that multiple people could come up with, the visual similarity between the images is difficult to dismiss. It is fair to assume that as a TIME photographer, Callie Shell is an informed member of the photographic community and is aware of the Fusco photographs - the reference should be made explicit.

I do not, however, agree with a previous commenter that Shell's referencing of the RFK series implies anything about assassination...

So, Bill Eppridge also took photos from the RFK funeral train. I saw those years before I saw the Fusco pictures...I like both, but this seems a little much to say it is a rip-off. But I like the fact you are standing up for the Fusco work.

Saying she should reference Fusco is like saying anyone who shoots football like John Biever should reference him. A bit much. But that is just my opinion. I get a real sense of being in a bubble in these pictures, more than anything else.

People should take a look at Bill Eppridge's new book, A Time It Was: Bobby Kennedy in the Sixties. Bill is an amazing photographer and was on the same funeral train as Fusco (both took very similar photos). People don't give Eppridge enough credit. He after all, was the one that took that famous photo of the kitchen boy over Bobby's dead body. Here's the real question, how did Fusco's train photos become more famous than Eppridge's? I was told that Fusco's Funeral Train was revised because of Eppridge's superior coverage of Kennedy. That is an interesting thought as well. I much prefer the Umbrage Editions Funeral Train than the Aperture edition.

I think if that was really the entirety of the pictures she took, then you might need/want to call it Fusco inspired. But the selection of Shell's Obama photos that I looked at were entirely different than those (and not Fusco-inspired looking at all).

They're at this link (you have to keep hitting "more images" at the bottom): http://www.digitaljournalist.org/issue0810/callie-bp.html

I would think that you have to blame a "curator" or "some research assistant" at TIME who pulled out a few specfic road-side "Fusco-ish" images to put them into a separate slideshow (and perhaps Fusco's pics are WHY they chose to do it). I think it'd be only natural to take a few of those type of shots while on the road w/ a politician. And if you look at the other site (I linked to above), she was primarily taking a very different type of picture.

As a photographer, I have had countless experiences where what seemed like a new idea was later found to be an old one.

The truth is that these coincidences happen every day in photography and art.

I think it's a bit presumptious and harsh to call this a "rip off." Why not just ask the photographer for a response?

I have worked in the news business for over 27 years. I started young and have worked along side some of the best shooters in the business.

Callie Shell's photographs are important, whatever style she has. If you look at her early work, the style is similar. Great photographers do not copy other styles. Great photographers come in to their own and get in to zones when great moments are happening. It's a motivational instrument that makes we shooters able to tell a story differently than any one else.

Callie is simply documenting what she sees in a way that we all wish we could in this era of the pre-fabricated political photo-op. We could all wish for this kind of access. It almost seems that some people are jealous that these photos remind them of someone else's work. I think it's baloney. How many sports photos have you seen that look the same as they did 10 years ago? Remember the first behind the backboard wide angle photo of an NBA player dunking the ball? Jeeze, now everyone does it and is accepted as the norm. It was a different way of seeing and photographers seized it as a different way to shoot a game. A tool.

I am not saying that copying a style is a good thing for anyone, everyone should have their own niche shooting style. Obviously Callie Shell has hers and is telling the photographic story of Mr. Obama better than anyone else right now. Good for her and good for the rest of us. We need more honest pictures like these we are seeing.

It's great work and she deserves the credit.