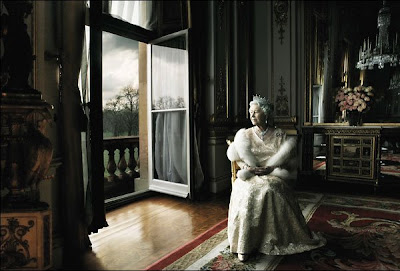 The British now have a name for it – Crowngate!

As reported earlier, the controversy began when Annie Leibovitz photographed the queen of England. A BBC documentary crew recording the portrait session for a documentary on the Queen, caught a moment when Leibovitz told her royal subject she might look better without her tiara. In a subsequent trailer promoting the film this scene was followed by a shot of the queen walking through Buckingham Palace, saying, "I'm not changing anything. I've had enough dressing up like this, thank you very much." The implication was that Leibovitz had offended the Queen, who then stormed out of the session. In fact, the clip of her walking through the palace was shot before the portrait session but was falsely edited to create buzz and also apparently to make Leibovitz look like a crass American. (This ethical lapse led to the resignation of BBC1 controller Peter Fincham.)

After a regal silence on the subject, Annie Leibovitz finally gave her side of the 'Crowngate' photo shoot last week at the opening of her exhibition at the National Portrait Gallery in London. The Queen was, in fact, "storming into the shoot" said Leibovitz. "They could have had just as good a story just showing that she got a little pissed, a little perturbed, a little bit frustrated. That was interesting enough, I think, and they had to go and make something else up."

Leibovitz defended the Queen's right not to be in the best of moods. "Most people don't like to be photographed," she said. "It's pretty normal that you can have that rough start. As she came in she said, 'I don't have much time'." By the end of the shoot, however, everything was fine, however, and apparently the Queen loved the photos.

Meanwhile Leibovitz's use of the word "pissed" in connection with the Queen's mood has given the British press even more to chew on! 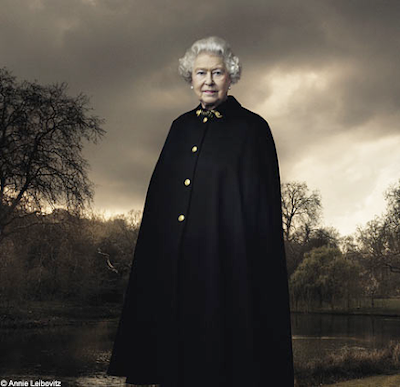 Posted by The Year in Pictures at 5:57 AM

I am usually not a supporter of Ms. Leibovitz primarily because I've always resented that a lot of her work has to do with the access she has and that she hires a platoon of assistants to do almost all the work.

That said, I suppose I should comment on the finished work only, and in that sense, much of her work is fantastic. These two photos of the Queen are magnificent. I also saw the Vanity Fair Portraits show at LACMA last week and in addition to it being a spectacular show, it reinforced how iconic so many of her photos are.

lovely work! I have no idea why people are so polarized by Annie Liebowitz or why people have find it hard to give her credit.

As long as people are aware that Annie's portraiture work costs a fortune to produce, and utilizes a giant stable of assistants, art directors, set decorators, makeup artists, PAs, and an almost unlimited budget, then fine. She shoots her portraiture work like a Gregory Crewdson faux movie shoot. She's certainly talented enough to do work like Richard Misrach or Simon Norfolk, but her niche is celebrity portraits. The polarization usually comes from hard-working photographers who don't have Vanity Fair-sized budgets and have to rely only on themselves and their respective decisive moment-catching eye.

Just to get the record straight here. The documentary as broadcast did not portray The Queen storming out of the photo session. It was the promotional trailer for the series that was edited to appear more controversial. Peter Fincham left the BBC because he denied that the trailer was edited and represented what actually happened.

What ridiculous comments. Who ever determined that to be a "true photographer," one needs to work alone? Just how many assistants is one permitted to employ before falling out of grace? Do you also condemn motion picture film directors, because your movie credits take five minutes to display the names of all of the contributors? Is Almodovar less valid because he's not running around with a steadicam, by himself, and then souping the film in his bathroom?

Consider her 'fortunate,' then, to have those resources. And, then, consider that she didn't always have them. She started, just like everyone else. And, when you have the budgets, scheduling, and responsibilities of someone of her stature, you might expect them not to fetch their own coffee or to grip their own sets. Grow up. If you don't like her pictures, fine, but quit the bitching about "access" and "assistants." She has access to what she shoots, provided by the clients for whom she shoots them. Just like anyone else. No one seems to be complaining about Steven Meisel or Mario Testino for some reason. Logic would dictate that. Apparently, logic isn't at work here.

I actually find it more controversial that the bottom picture is actually sandwich of a studio shot and a landscape. That disappointed me a bit (not in a rational manner, though :-)

You can buy assistans and a production team.

You can't buy an idea.

Look at Leibovitz's personal work to judge her fully as a photographer. WIth no assistance, she has some incredible shots from her personal life, of her family, including her parents and children.

The last shot of the Queen? She didn't agree to being photographed outside when Leibovitz asked her. What a beautiful shot, no matter how it was put together. The end result is stunning.

Ck Dexter Haven - I've worked with Leibovitz, and other well-known portrait photographers. The difference - in film terms like you use - is that she is like the Michael Bay of photographers - HUGE BUDGETS, UNLIMITED PERSONNEL (like 40 people!) - while other equal stature photographers have maybe three or four assistants.

I know she worked her way up and I respect the final work, but someone asked why the resentment, and that's it. Some people like "Pearl Harbor" or "Armageddon," and others prefer "Volver" or "Talk to Her." I'm in the latter camp.

Leibovitz is a great photographer, but not a great artist. It's the difference between a quality craftsperson and a true artist, it's the "soul" factor. Just like Edward Hopper was not a great painter, but he was a great artist. Plenty of people could paint more realistically than Van Gogh, but not many could inject so much passion and soul onto a canvas.

So, yes, Leibovitz is very talented and produces A-quality work with her team of assistants, but I don't feel anything from her work like I do when I look at a photo of a tricycle by Eggleston, or the enigmatic face of a girl in war-torn Afghanistan. You get the idea.

The first portrait is stunningly beautiful. The second makes Her Majesty look like George Washington at Valley Forge. A bit of sly American humour, perhaps?

I don't quite like her later work. It feels very photoshopped, and I have to keep questioning the integrity of the picture. As said earlier, the second portrait was just taken in a studio, and later on the background was edited in. Personally for me, that ruins it.

Is it a spectacle or art? A Madonna show or a Bob Dylan tune. Both have their places (really).

The photos are gorgeous and her style comes through, as it often does. And it's not her kitschy side. With celebrities perhaps the production is an asset. They're certainly not "just another photo of celebrity x." In this sense, taking celebrities may be harder.