Wouldn't You Just Know It... 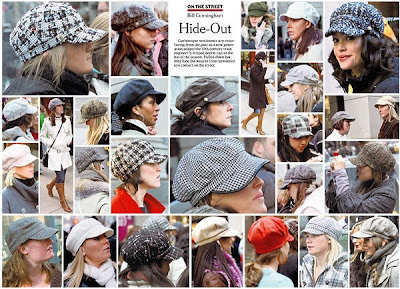 So no sooner do I post about Bill Cunningham never exhibiting his work than The New York Times hustles up a show just to prove me wrong. This press release came out today:

NEW YORK, Aug 13, 2008 (BUSINESS WIRE) -- The New York Times and Bergdorf Goodman announced today that they will kick off New York Fashion Week in September with special window displays and an in-store exhibit of Bill Cunningham's photography from his long-running "On the Street" and "Evening Hours" columns. Both columns appear weekly in the Sunday Styles section of The Times and online at NYTimes.com. The windows will be on view from Sept. 5 - 16, along with an exhibition on the third floor at Bergdorf Goodman, which is located in New York at the corner of Fifth Avenue and 57th Street.

Mr. Cunningham is a familiar face on this very corner, where he can often be spotted snapping away at the city's most fashionable citizens, capturing within the keen eye of his camera's lens many of the glamorous personalities and colorful characters that populate his New York Times columns. The Bergdorf Goodman windows and exhibit will offer a unique retrospective of Mr. Cunningham's work. The images - candid photographs of everyday New Yorkers taken on the street as they sport their fashion know-how, and of equally stylish guests at glittering evening events - have never before been collected and shown in this way.

"New Yorkers have their own distinct take on fashion, and no one chronicles that style better than Bill Cunningham," said Jim Gold, president and CEO, Bergdorf Goodman. "We're delighted that our Fashion Week windows will pay tribute to Bill and the countless stylish moments his images have captured over the years."

"There is no better way for The Times and Bergdorf Goodman to celebrate style in New York City than by honoring Bill Cunningham's legendary work and great contributions during Fashion Week," said Denise Warren, senior vice president, chief advertising officer, The New York Times Media Group. "Bill's Sunday Styles columns excite and influence tastemakers around the world and exemplify how fashion is translated from the runway to the street."

Mr. Cunningham has been a photographer for The Times since December 1978. He also narrates a slide show of "On the Street" posted each week on NYTimes.com, with additional comments and background on his photographs.

Posted by The Year in Pictures at 6:06 PM

If I was the cynical type I would accuse you of doing advance PR for the New York Times....

But I think it's more likely you just have your finger on the pulse of what's hot. Which is why I keep checking this blog every day.