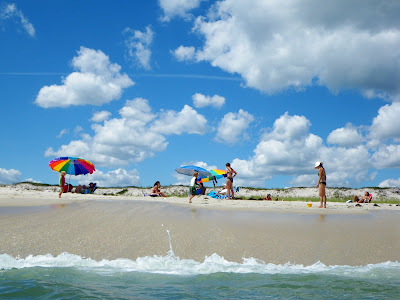 Last weekend I was swimming in the ocean and as I looked towards the shore people were arranged in groups and posed in mid-action in ways that struck me from my watery perspective as views I had never seen before. Beaches have long been a favorite shooting spot for numerous photographers – Elliott Erwitt, Eric Fischl, Weegee, Robert Frank, Joel Meyerowitz, Richard Misrach, and Massimo Vitale are just a few who come to mind – but because of the obvious technical difficulties none of these photographers have ever shot from the water. So I thought, here’s an opening, and decided this would be a fun end of summer project.

The first challenge was to find an appropriate camera and as it turns out, Pentax have just released a new digital underwater camera, the Optio W60, which is billed as a great knock-around little camera. It's waterproof down to 13 feet, sand and scratch-proof, has a 5x zoom, and can be found for under $300. It also uses the standard SD memory card. As I hate the idea of taking my regular camera to the beach for fear of ruining it, this seemed like a sensible addition to my camera collection and therefore a justifiable expense.

So this weekend, and under the most favorable conditions imaginable,
I headed into the water with my new toy. Once immersed I realized there were a few immediate and rather serious challenges. The first was that in the water it’s impossible to hold the camera or frame the picture with any great accuracy as the waves and swell have you in constant motion. Secondly, the W60 has a noticeable time lag between pressing the button and snapping the picture. So clearly luck was also going to be an element (which I guess is always the case with any kind of spontaneous as opposed to controlled photographic situation). Finally, it occurred to me that if you’re a lone male swimmer, you might want to think twice about taking pictures of strangers in bikinis. While this seemed like a promising angle with great commercial potential, for reasons of propriety I demurred.

Anyway, here are the results of my first foray into the water - my best 4 snaps edited from about 30 taken. (Click to enlarge.) 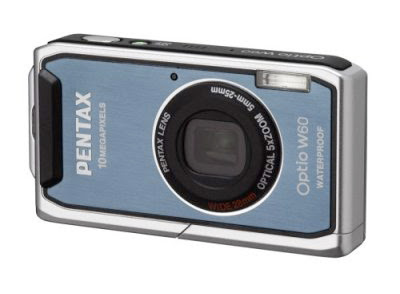 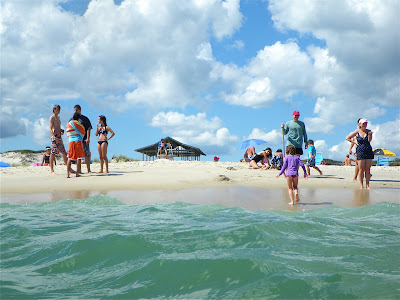 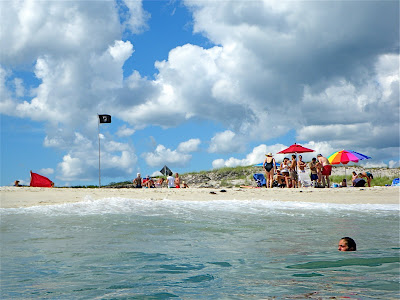 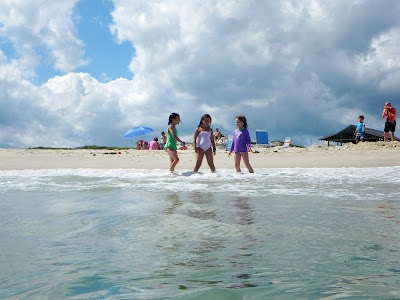 Posted by The Year in Pictures at 5:37 AM

Beautiful!
Like a green/beige/blue layer cake, I think I like the 2nd one best. Although the little girls in conversation are lovely, wonder what they're cooking up?!

The first one is my favorite !
Did you see the Asaki Narahashi show at Yossi Milo?
Oh and you made me chuckle when you were writing about how it might look that a stranger is out there in the water photographing strangers in bikinis.

My eye went to color of the sea, the reflections of people and sky in the greeny water, and the contrail streaking through the clouds in the first image. Nice results from a nice camera and nice eye.

Amazing pictures. It looks like a shark's eye view of a beach.

They are excellent pictures - I'm not sure how often I would really need a waterproof camera but the idea appeals to me...

wow. i LOVE them! it's true, you never see pictures from this perspective.
i was wondering what to do about pictures at the beach myself...and on boats (i mean, what if you capsize?). we have an older digital elph, so we usually take it, no way i'm taking my camera. but i can definitely see the justification for that waterproof pentax.

Fantastic. Huge fan of the blog. Thanks for all your insight.

what a fantastic idea! the water in the foreground somehow makes it feel like the people on the beach can't see you. Like you're peeking in their windows. I love it!

Could the day be any better? Look at those clouds!

The pictures are just beautiful! I love your blog

Yes! I love hte idea of a waterproof camera. Seem just so fun to take a camera into the water. What great fun! Love the pics. Makes me wish it wasn't Monday.

Great photos and you are obviously having better weather than we are in London!

Very different but I've always thought this a strong image of Michael Stipe by Anton Corbin (sorry for quality, only one i could find quickly):

beautiful photos! I like very much how did you take the sky, the bright of the sea and how color is intense and alive

You must promise never to reveal the location of these shots....it will forever lend the pictures an air of mystery and idealized perfection....seriously, don't do it.

I think I recognize it. The Jersey Shore - correct?

half awake & half asleep at the beach....

...and its a very usefull camera in heavy rain and snow.
NY in rain and/or snow! Yea!

Btw, my Ghirri book arrived and as I thought very inspiring photos.

Thanks for the tip, and to my regards Melissa Harris if you see her.

What terrific photos. You've transformed the shore into a stage, and the characters into actors who bring each scene to life, creating a dramatically different effect from one photo to the next. Great photos, great site.

After reading this post I ordered the camera - I haven't had a chance to make use of its waterproof construction yet but I have been very impressed with the camera. The macro feature produces crisp pictures even when the camera is in my shakey hands!

Pentax should pay you commission for my purchase as it was you amazing pictures which sold it to me...