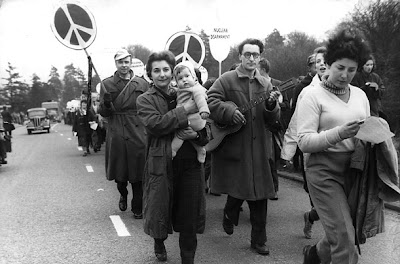 Ironically, one of the most notable anniversaries of the year seems to be slipping by almost unnoticed. This year marks the 50th anniversary of the peace symbol. The iconic sign was developed in 1958 by Gerald Holtom, a professional designer, artist, and conscientious objector in Great Britain.   It was originally designed for Britain’s Campaign for Nuclear Disarmament. (In fact, the symbol is a combination of the semaphore signals for the letters "N" and "D" - standing for Nuclear Disarmament.) However, it quickly spread worldwide, and has since become universally known to represent peace rather than simply nuclear disarmament. After 50 years, though, the sign is as much a symbol of hope as any kind of realistic eventuality. Still, it's the hope that keeps us going.

I’ve been looking for great or iconic pictures featuring the peace sign and have so far come up pretty much empty handed. So any suggestions are welcome. 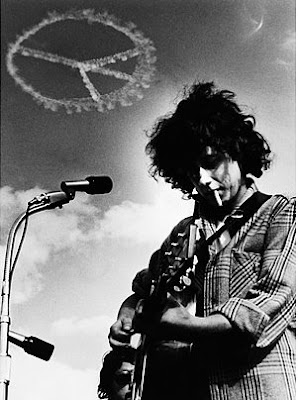 A skywritten peace sign above folk singer Arlo Guthrie during a 1969 show at Tufts University in Medford, Massachusetts. Uncredited photo from Corbis

Posted by The Year in Pictures at 4:10 PM

wow. That's awesome... thanks for sharing!

I saw this news story a while ago, and was just recently thinking the same thing....why is this not a bigger news story?


Also.... tonight on Sundance Channel was a great documentary on Peter Beard. They will probably re-run it. Keep an eye out for it....well worth seeing.

I already wrote it, but I have to repeat: I just adore your blog... Félicitations!