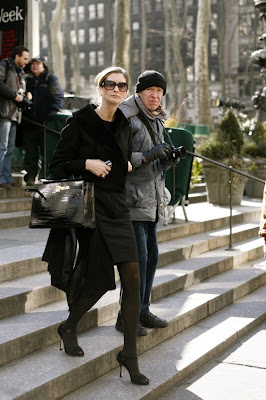 Bill Cunningham by The Sartorialist. February 2007.

Before the explosion of style photography on the web, before US and People Magazine’s red carpet shots, there was Bill Cunningham.

The original street fashion photographer, Cunningham has for the last few decades recorded the changing style of the world’s fashionable people for the New York Times. But what is truly unique, if not bizarre about Cunningham is his intentional artlessness and his obsessive evasion of the limelight. It’s an odd métier for someone as private as Cunningham to have chosen but in a way it all fits. By refusing to compose his shots, or be interviewed, or exhibit his work, or do anything other than go out and shoot – he is able to possess the rarest and most precious garment of all – the cloak of invisibility.

So little is known about Cunningham – he doesn’t even have a Wikipedia entry – but here are the few known facts:

Cunningham was born outside of Boston to a Catholic family about 70 years ago. He photographed his first fashion show in 1947, worked as a stock boy in a Boston department store and later at Bonwit's, served in the Army, after which he began making hats and decorative items of feathers.

For a time in the early '60s, Cunningham ran a small hat shop on Job's Lane in Southampton, Long Island, in the window of which he placed a single straw sun hat the size of a beach umbrella.

By 1963, Cunningham had abandoned the hat business and was hired as a reporter for Women's Wear Daily. He was fired after nine months. He freelanced as a fashion correspondent for the Chicago Tribune, where the perks included annual trips to cover European couture. From there he went on to other freelance jobs including a long stint with the pre-Conde Nast Details, a pioneer in its coverage of downtown fashion in the '80s.

There are two versions of how Cunningham first came to pick up a camera. In one, British photographer Harold Chapman, working for the New York Times in Paris, suggested to him that it would be easier to take pictures of fashion than to make his usual elaborate notes. In another, the fashion illustrator Antonio Lopez gave Cunningham the first camera he had owned since a boyhood Brownie.

He is thought to have bought no new clothes in 30 years and is rumored to keep what few garments he owns on the hooks of the numerous file cabinets that line his living space - a studio apartment in Carnegie Hall that has been described as one huge filing cabinet.

When Cunningham covers the European fashion shows, he stays in the most modest lodgings in Les Halles where no one visits him, where the phone is in the lobby, and the bathroom is shared. He has the manager remove the bed from the room so he can sleep in a corner on the floor.

In addition to his regular postings in the New York Times, Bill Cunnningham is now doing quite charming audio-visual slide shows for the paper’s website. Selections from the current story – about how the city’s women magically and simultaneously started wearing summer black – appear below. 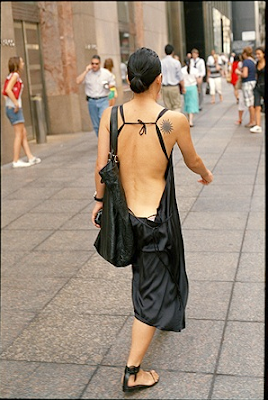 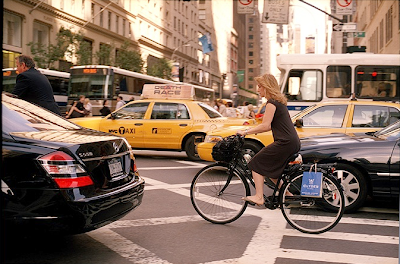 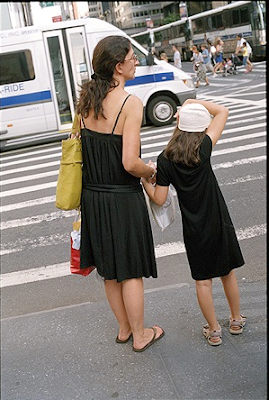 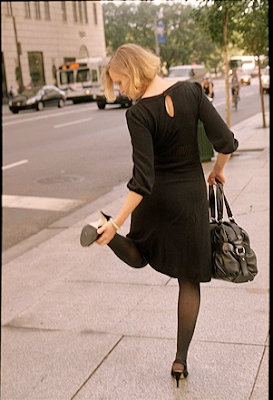 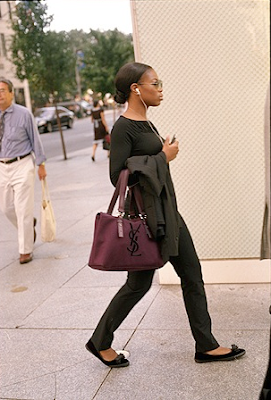 Posted by The Year in Pictures at 6:25 AM

What an extraordinary character! I'd love to read a full-length New Yorker profile of Cunningham. As for his work for the NY Times, I've always found him to be something of an enigma. He does seem to cultivate the persona of the amateur, which can be refreshing at times, and annoying at others (as in his recent discovery that NYers like to wear scarves as fashion accessories, not merely to stay warm). And you're right about the photos themselves; he clearly strives for a "snapshot" quality, perhaps to focus the viewer's attention on the content of the photo rather than the art of the photo itself. What a striking alter ego he makes to your friend Sart!

as always great! you should do a wikipedia entry for him, seriously!

I've followed his work for years. Thanks for posting another great story!

Thanks for directing us to such wonderful sites.

I love BIll! Really have been a fan for years, but the audio slideshow on NYTimes Online has taken it to the next next level. The sound of his voice, so happy, I love it. I wait for it every week.

Bill is an amazing inspiration. An eye that never stops wish there was a book or 10 out there to see his history of fashion. imagine how much more energy he would have if he slept in a bed!! xpmc