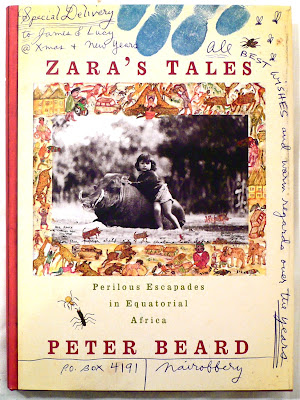 Like many of my fellow bloggers, it seems, I’m on vacation for the next two weeks, but I will try to keep posting and amuse you with various tales, recollections, observations, etc.. (I’ve just noticed, for example, that Microsoft Word does not recognize the words “blog” or “blogger” and urges you to check your spelling!)

My big summer project at the gallery has been taking every book down from our library in order to re-organize the shelves – no small feat given the 100 + linear feet of books I have. But it’s a job I don’t mind doing because no-one ever looks at all their books and so it was like visiting old friends.

There was also the pleasure and surprise of uncovering forgotten ephemera picked up over the years and tucked in-between the various books. Here are three examples and the stories behind them. The first (above) the cover of Peter Beard’s book “Zara’s Tales”. I got it at a book signing at my daughter’s school – an annual event where any parent who has published a book that year is seated at a table and decorously signs their new tome to another parent nice enough to come to yet another fund-raising event. About a dozen authors were each seated at their own tables and you would move through the various novels, cookbooks, history books etc., until you found a book or books you wanted.

I was delighted to see Peter Beard, whose work I’ve always admired, but let’s face it - the guy is out there! (This is a man who spends half the year in Africa, sups with the Masai, and has been mauled by more species than you’ve had hot dinners.) Anyway I stopped to say “hi” and buy his book and after a brief chat Peter pulls out a large ink pad, dips half his hand it, impresses his fingers across the top of the cover, and proceeds to embellish the remaining white space with little flies and writing until he has not just signed the book, but created a veritable work of art and performance piece! 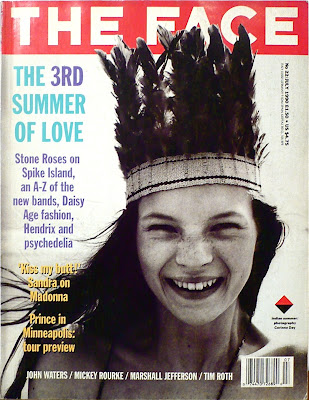 The next thing I found was the original issue of The Face magazine from July 1990, the one that featured a then totally unknown Kate Moss in Corinne Day’s “Indian Summer” story. So we’re talking 18 years ago! I think this issue is probably worth hundreds if not thousands by now. I’ve always had a thing for Kate so this was a great re-find. I also had the chance to work with her on an exhibition I did a dozen years ago in conjunction with the release of her book “Kate” and she’s just a delight. A quick story. At the time my wife had literally just given birth to our second child, Josie, and when Kate met my wife, Lucy, she looked her up and down and said approvingly “You can’t have had a baby – you’re too skinny.” So from then on Lucy had the distinction of being called “too skinny” by Kate Moss. Lastly, I found the proof of an invitation for an event I did combining Don James’s California surfing pictures from the 1930s with the then current Roxy Quiksilver campaign. (The photo at the bottom, by Jeff Hornbaker, has always been one of my favorites. These are champion surfers and I just love their skill, nonchalance, and style.) Anyway, the design for the invitation was by my good friend Tom Adler, who I’ve blogged about before, but he is basically responsible for the whole revival of interest in surfing visuals; he creates, designs, and publishes the most amazing books and is better at putting pictures together than anyone I know. But this piece of graphic design, so seemingly simple but in reality so skillful, is one of my favorite examples of great design. At the time, Roxy made a handful of T shirts just for the show and modeling this rare collectors’ item is none other than Josie Danziger, who turns 13 on Friday. 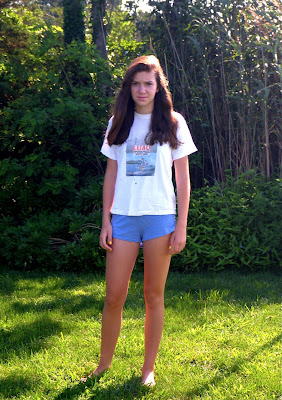 I love Peter Beard's work. I just discovered him a few weeks ago when my mother loaned me her copy of Fifty Years of Portraits, which is sitting right on my desk as I read this blog.

I'm sitting here as I write this looking at my personalized copy of "Zara's Tales." You're right about Beard being "out there"; in this copy, his fingerprints on the cover are an earthy red, and appear to have been made using animal blood. The blue ink pad must be reserved for school signings. You and your children are lucky he didn't pull out a razor and open a vein for the occasion.

what fantastic finds! Kate Moss is so young! wow. I guess I was young in 1990 too. lol.

I agree! That picture of Kate Moss is shocking. She really just gets better with age.