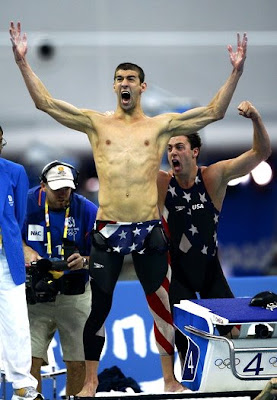 There’s no question at this point in the Olympics that Michael Phelps is the big story and the great visual moment has to be his primal scream as Jason Lezak unbelievably caught the Frenchman Alain Bernard in the home stretch of the 4 x 100 relay to win the gold for America.

Yet perhaps equally amazing along with what is being called the greatest race ever is the daily caloric intake Phelps revealed to NBC.
In a recent interview, Phelps listed his average daily meals:

Dinner:
Another pound of pasta
1 whole pizza
Another 1,000 calories worth of energy drinks

So, in the course of an average day, Michael Phelps consumes over 12,000 calories. (The average male should be eating around 2,000 calories a day.) 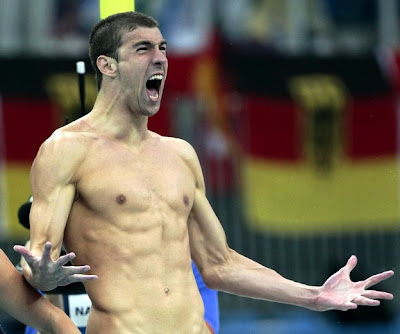 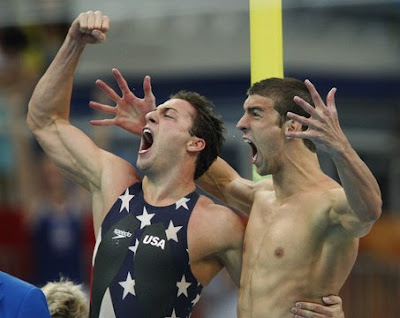 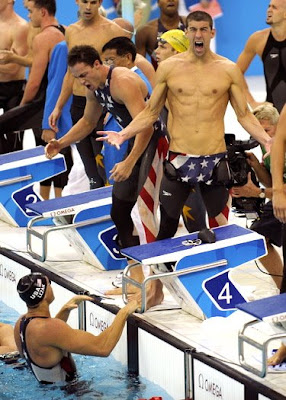 And one more nice picture: 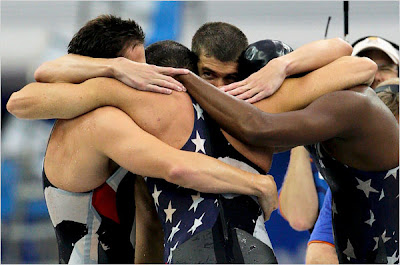 lol. My husband cannot stop talking about what he eats!!!!! hilarious. he is obsessed.

I guess this diet doesn't leave room for fruits or veggies. Fascinating.

How can a person seriously eat all that in one day? That is insane...and kind of grosses me out.

Thanks for the factoids! I heart MP!!!!

This just blows my mind.
I know he is in amazing shape and must expend tons of energy (hence the quantity of food consumed) but I am mystified by the degree to which his diet just seems downright poor in quality! Where are the veggies and what's with all the mayo?!?!?

Wow, that is a lot of food... I wonder what his diet looks like when he's not in Olympic training - maybe something green?! I would guess that b/c of the intensity of his workouts he needs all the fat (mayo etc) and carbs that he can get to keep him fueled up, but surely some fruits & veggies wouldn't hurt?!

i wonder how much time he spends eating that much food every day... lucky bastard. i would be a round ball if i did that. hahaha amazing how his entire body is pure muscle.

For anyone else, just a quarter of that diet is asking for a heart attack. He probably throws in a few multi-vitamins while he pigs out to repair his body cells as he trains.

I'm amazed that the human body can use up that many calories in a day. Olympic athletes are crazy in their own way.

Holy crap! How can that possibly be healthy?!

I can't believe you all fell for that.

No no. This is all true. He has to take it all in so that he can burn it all. He can't win medals on an empty stomach! Haha.
Happy blogging,
Brittany