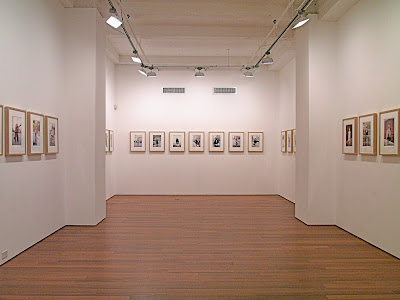 Tonight marks the opening of The Sartorialist’s exhibition at Danziger Projects. (6 – 8 pm. 521 West 26th Street.) All are welcome.

The idea for the show began when I landed on The Sartorialist’s blog for the first time this past July and was wowed by the quality of his pictures. Here was a highly accomplished photographer with a uniquely personal point of view taking pictures digitally and then posting them on his blog. There was no connection to the art world evident – but I felt that here was the first real fine art photographer of the digital age.

I e-mailed The Sartorialist - a.k.a Scott Schuman – and we began the process which 6 months later has resulted in the opening of his show. The process involved meeting (we hit it off immediately), establishing that his files would hold up to gallery standards (no problem), looking at all his work (easy because it’s all posted), figuring out what the prints should look like (what size, what paper they should be printed on), what kind of installation (single hung, double hung), prices and editions, and most importantly – expectations. As we were both taking a step into the unknown, I wanted Scott to know that I completely stood behind the work, but it was possible that people would not be able to make the leap from appreciating the work online to appreciating it in a gallery. The new (and especially the unconnected to the system) is always risky.

When the word of the show first made it out to the internet several months ago, the response was immediate and broad with comments falling into two camps – either congratulatory: “Well deserved, Sart.” or snarky: “Who does he think he is selling his pictures in a gallery for $1,200?”. There were quite a few of the latter. (However, this is an incredibly low price in today's art market.)

We hung the show last week and I have to say that to me it looks perfect. At the last moment we switched to non-reflective, u.v. filtering, museum plexiglass, and the results are worth every penny of the $240 extra per frame the plexi costs! The pictures really glow on the wall without the distraction of reflection. And the response has been unbelievable. We let people in early once the show was hung and collectors with no knowledge of The Sartorialist have literally walked in off the street and bought pictures. Seasoned collectors have bought groups. With only ten prints being released of each image two have already sold half their editions! Museums are interested. New projects are brewing.

When I put on a show I try to write a press release that best conveys both information and what I feel about the work. To see what I wrote along with many of the images in the show you can go to the Danziger Projects website.

The pleasures of a doing a show are creation and collaboration. This one has had it in spades!

Brilliant. The Sartorialist's blog is a daily favourite. While I love all the different styles he finds on the street, I appreciate even more his intepretation of it all through the photography. I'm looking forward to seeing this exhibition later this month.

Congrats on a great looking exhibit to you, James, and of course to Scott. I've been a fan of Scott's for a while and he brought me here to your site. Very well done blog- great pictures and commentary. Keep on!

Lovely frames and great size for his portrait photographs!
And I landed on your blog via Scott's.

Will be following the Year, with pleasure.

I, too, found your blog via The Sartorialist, and I've been coming back to explore the archives. Thanks for sharing this story--those of us who love Scott's site for his artist's eye as well as his warm connection with his subjects and his public are thrilled for him. I'm sorry I live too far away to see the show in person.

You've really tapped into a cultural phenomenon with this exhibition. Congrats!

Congratulations on the opening. I have been reading Scott's blog for a couple of years now and I love it. I am glad to hear the success of this venture. I did want to comment about how great the pictures look mounted and how they remind me of the old Vanity Fair prints from back in the early part 20th century.

I am so glad to read and see what's in this post!

Great idea, and glad the evening was such a success!

What makes "The Sartorialist" such a pleasure to read is the simple elegance without clutter that keeps one's eyes on the clothes. Scott is an intuitive photographer who obviously loves what he does, and his creations deserve to be exhibited in a gallery.

Thanks very much for doing this. Scott's site is a special one and his visual take on life unique.

You are doing a great service by running this show; hopefully, more people will now appreciate his ability to capture in people so much more than what they're wearing.

Great job and I'll make sure to stop in when I'm in New York next month.

Congratulations! I hope this exhibit is ridiculously successful.