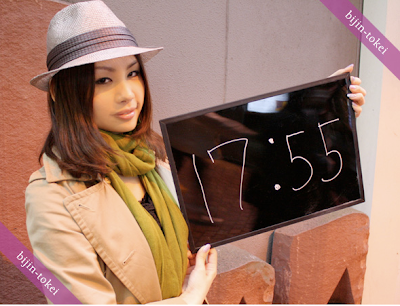 A while ago I was looking to see what cool iPhone apps there were for the phone’s camera when I landed on the site TechCrunch and a story on Japan’s 32 best iPhone apps. Most of the apps were games (which are of no particular interest to me), but one app appealed to me because of its blend of photography and what seemed a perfect instance of form following function in the most populist (pandering) way. This is Bijin-Tokei - a clock app which shows 1,440 different pictures of girls (one for every minute of the day) each holding a blackboard showing the current time. (Bijin Tokei means Hot Girl Clock.) To be exact, you often get the same girl displaying several different minutes. Apparently finding 1,440 willing models was too tough for v.1..

This seemed like such a simple formula for any kind of photography – I imagine if you’re a birder or a train spotter the thought of a different picture every minute of the day would cause equal excitement - I immediately recommended the idea to the photographer Stephen Schuster who has been working on a spring break project. We'll see if he takes my advice and gets rich!

As of yet there doesn’t seem to be an American version, but according to Asiajin: The Next Generation Internet Trends in Japan and Asia, there is now Binan Tokei – beautiful boys clock, Gal Tokei, Pit Babe version, a Korean version, and a planned French version.

Lady and Gentleman photographers of all stripes: start your engines!

Posted by The Year in Pictures at 8:47 AM

Going back to your original question about iphone apps for the camera, did you find any that you really liked? I've had a lot of fun with CameraBag and Lo-mob. In fact, I'm working on a book (most likely to be self-published) of these shots, taken and processed entirely on the iphone. The iphone is the new toy camera.

I also hear that Joel Sternfeld is doing a book of iphone photographs from a trip Dubai--don't know if those will be processed by any app--probably not. Or maybe he created a "Sternfeld" app for that project. Now THAT would be a moneymaker!

Have you heard of http://www.humanclock.com/clock.php?

It's the same thing. Not done as an iPhone app, but certainly the same idea.

do try autostitch app, it's incredible. It's like having a wide angle lens on your iPhone. For best results, kep the lens in the same spot and turn the iPhone around. You'll love it!