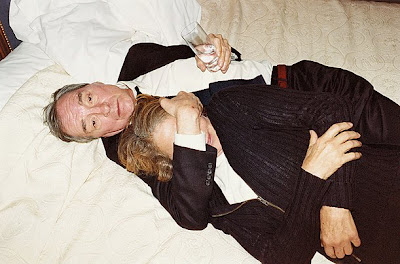 It's always fun to hear what one photographer thinks about another, and rare when the affection is as palpable as that between Juergen Teller and William Eggleston. From the current British VOGUE, Teller writes amusingly and articulately about their friendship:

I first encountered William Eggleston’s photographs in my early twenties. I was very intrigued, and I liked them immediately, but I wasn’t quite sure what they were all about. Still, they sucked me in and stayed with me. Then, six years ago, an American magazine asked me if I wanted to photograph him. I didn’t think twice about saying yes, because, by then, he’d become a real master to me. I sent my books to him before heading to Memphis (where he lives), so he could see I wasn’t just another idiot coming to shoot him.

William’s son Winston picked me up from my hotel and drove me to the Eggleston Artistic Trust building. But William was nowhere to be seen. We were in the archive room for ages before I asked him, “Where’s your dad?” I went outside for a cigarette and William was sitting on the steps up to the archive room, a glass of water by his side, chain-smoking. We greeted each other and sat there smoking for about an hour. Then, nervously, I said, “This is perfect. Let’s do the picture here. Don’t move.” He nodded and I began. I think he liked me from the start, and he invited me to his house that evening. William’s a keen musician and he played Bach on the piano until 4am.

I was due to fly out the next day, but William didn’t want me to leave. He even came in the taxi with me to the airport. “Juergen,” he said, “do you want to go on a road trip in Bavaria?” What could I say? “Of course!” I didn’t think it was going to happen; we were so drunk.

Three weeks later, I flew to Bavaria to meet him. It was three days of total madness. We brought our cameras, but neither of us took a single photograph. We found a hotel where, again, there was a piano, and we stayed up until 3am every morning, playing music, talking, doing nothing really. William is good at just being; that’s something I learnt from him.

Not long after that, I was talking to Marc Jacobs about who we were going to use as a model for his menswear campaign that year. I suggested William. It’s well known he’s a very stylish man, and I knew Marc loved his photography. Still, it took me two days to build up the courage to ask William. “Juergen,” he replied, “I’d do anything for you. When are we going to do it?”

William had been photographing Paris intermittently over the past three years, and he had seen Louis XV (the book I’d worked on with Charlotte Rampling, shot in the Hôtel de Crillon). We shot the Marc Jacobs campaign in the same hotel room. It took hours to get William dressed; it was 10.30pm before he was ready. Suddenly, he said, “I want to meet Charlotte Rampling. Maybe we could do Louis XVI?” I sighed, but called her anyway. “Do you recall me telling you about William Eggleston? He wants you to come over and have a drink.” She replied, “Give me half an hour.”

When Charlotte arrived, William became shy, like a little mouse in the corner. I wanted them both in the pictures, so they ended up – dressed – in bed together. They got on so well, I started to feel a bit jealous – that’s William’s power. He’s unbelievably charismatic and can charm people to do whatever he wants.

The following day, we were sitting on a bench under the Eiffel Tower. We had the same model of camera, with the same lens, slung around our necks. I glanced behind me and saw an orange recycling bag with a red Coca-Cola can in the bottom. “Look,” I said, “that’s an Eggleston picture.” “Sure is,” said William, and we both turned to take the picture. He took one snap, I took five shots – all the time thinking, “I’m going to have an Eggleston picture!” Of course, mine didn’t work, but William’s ended up on the wall of his show at the Fondation Cartier.

He has a different way of seeing, of looking – it’s completely unforced. And he never gives a damn whether a picture comes out or not. I’ve never met a freer man; the sense of freedom he has in his every thought, decision and movement is extraordinary. His images give me hope; they capture the comedy and tragedy of life. He could never do what I do, I could never do what he does, but we respect each other’s work. As he once said to me, “Juergen, we have some things in common: smoking, drinking, and women. Photography just gets us out of the house.” 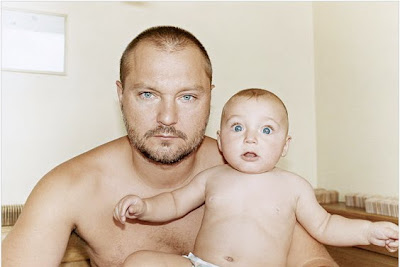 Juergen Teller and his son Ed.

Posted by The Year in Pictures at 9:55 PM

Great story. I need to study more of Eggleston's work, he sounds like an interesting man.

that was a wonderful read. well written and a real insight into the minds of two greats. thanks for posting this!

Your posts rarely dissapoint. It's a complete education, this blog. I can't tell you how much I enjoy it. What a great story.

Great,
Your at your best when you post about those your most enthusiastic about...

A great January,aim for the stars...

What a great read! It must have been an incredible experience to bond with Eggleston like Teller has. I have been passionate about Eggleston's photography since I first saw his work in college in the late 80s and am always glad to get another insight into his ways.

So cool! I really dig both of these guys, they do it their way everytime and produce unique awesome work. They both have new books out, Eggleston's is of his Paris work, its beautiful, and Juergen's is his lonstanding collaboration with Marc Jacobs for his campaigns, both great books!
Excellent post, thanks so much.

A great article - thank you for posting it.

I can't really understand this craze about Juergen Teller. To me it's just the prototype of all those fashion pictures we are overwhelmed with - filled with violence against women, making magazine readers crazy, and quite boring really. I'd like to understand though.

Interesting. I am going to the Eggleston Art Opening at the Art Institute of Chicago in late February and am amused and surprised at his personality. Now I have a little lens through which to view his photography.